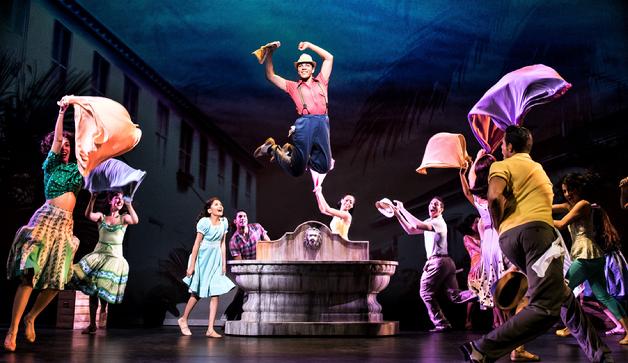 Matthew Murphy
The company of the Proctors production of 'On Your Feet! The Emilio & Gloria Estefan Broadway Musical.' 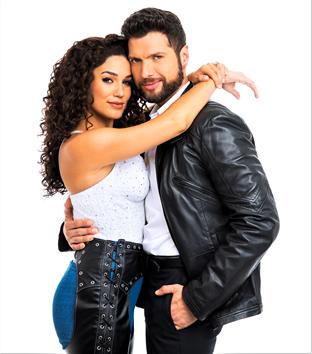 Girls! Listen to your mothers. Don’t always do what they tell you, but heed them. That’s the lesson, the story, of “On Your Feet! The Emilio & Gloria Estefan Broadway Musical.” It’s what the show teaches you: listen, profit by the experience of your elders. Young Gloria, a smart, educated young Cuban refugee in Miami, has great possibilities in technical fields when she meets a musician named Emilio Estefan and goes against her mother’s wishes to audition for his band. She learns, too late to change her course in life, that her mother once had the same opportunity, an even better one in Hollywood, and turned it down for a life devoted to family. It is when Gloria Fajardo moves into the magnificent flashback that we see and hear what an opportunity was lost.

And now and then, it is the mother who learns from the child. At the height of her success, Gloria Estefan was severely wounded when her bus was sideswiped and she was nearly fatally wounded. This takes place in the second act and it is her glorious comeback that concludes this jukebox musical. What makes this show different from other bio-shows about pop singers is the marriage. There is no abuse. There are no horrors between husband and wife. This is a couple in love, who support one another almost all of the time and provide for one another. The love story in this show is a beautiful one and that alone makes it a winner. 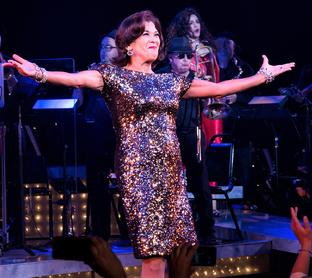 Doreen Montalvo as Gloria (the mother) in the Proctors production of ‘On Your Feet! The Emilio & Gloria Estefan Broadway Musical.’ Photo: Matthew Murphy

It also doesn’t hurt that Christie Prades is beautiful and sensual and that Mauricio Martinez is the sexiest Mexican actor America has seen since Ramon Novarro. She is a great dancer and a dynamic singer and a fine actress. He is handsome, talented and so overwhelmingly attractive that, whether singing, dancing, acting, standing, moving or stationary, he strikes a sexy response from the audience. And when he smiles at her and she smiles at him, you feel the urge to turn away, but you can’t—you’re mesmerized.

The story highlights three generations of women: Gloria, her mother and her grandmother. Consuelo, the abuela, is played with strength and beauty by Debra Cardona. Her scenes are always effective, sometimes funny, sometimes serious, but, as the champion of her granddaughter’s dreams, she is most effective no matter the mood. Ana-Sofia Rodriguez plays the young Gloria most effectively and, when she transforms into Christie Prades, her particular loss is genuinely felt.

Consuelo’s daughter, the Gloria who is mother to the pop singer, is played with great strength and conviction by Doreen Montalvo. When Consuelo fills her granddaughter in on elder Gloria’s lost career, Montalvo transforms into her younger self with an electric set of dance moves that are riveting. She is shown to be every inch her future-star child’s equal, if not her superior. Her number, I think it is called ‘Mi Tierra,” shows her off to the great of the audience. Later on she comes back to sing a song that is equally gut-wrenching. 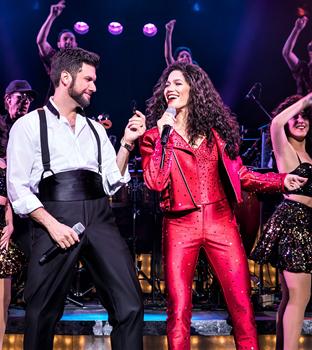 Mauricio Martinez as Emilio Estefan and Christie Prades as Gloria Estefan in the Proctors production of ‘On Your Feet! The Emilio & Gloria Estefan Broadway Musical.’ Photo: Matthew Murphy

Her performance is something that brands this show. Director Jerry Mitchell and choreographer Sergio Trujillo have transformed this play into a non-stop high-stepping, emotionally split-screen nonstop dance festival that has to be exhausting to perform. It rarely pauses for a scene. It seems to be in perpetual motion. It is hard to imagine what it must be like to perform this show eight times a week or, worse, twice a day. The energy level is high from the moment the front curtain gives way to the onstage band and almost never stops until well after the curtain calls are done.

This energy exhaust is both capitalized and emphasized by the lighting design of Kenneth Posner, who uses more moving lights than I think I have ever seen before, as well as extraordinary projections of everything from show posters to street scenes to Fourth of July fireworks. The set designs by David Rockwell are superb and often in motion and the costumes—those fabric creations that define time, place and character—by Emilio Sosa are spectacular and a show all by themselves.

Everyone in the company moves, dances, sings and does acrobatics, it seems. A young boy, Carlos Carreras, playing a Jewish bar mitzvah boy—although I think this kid is nowhere near 13—who gets caught up in the “Conga” craze after the song is released, and he dances with so much fervor and emotional impact that he could stop the show if the music wasn’t so relentless. He is typical of the large cast whose members play small roles, perform as a chorus and create a curtain of reality of the Miami Cuban scene.

The stars of the show, Martinez and Prades as Emilio and Gloria Estefan, are without a doubt incredible singly and in duet. Late in the show, during one of the more emotional sequences, Martinez and Montalvo sing “If I Never Got to Tell You,” which evokes Gloria to such an extent that it is hard to hold back the tears. And when Prades performs a song with Martinez, it does exactly the same thing. For a show I expected to be just a collection of hit tunes I didn’t know, it was a delicious surprise to discover that the show is more than just its parts: It is the human sum of those bits and pieces of music and life that forged the legend of this couple’s achievements. I go to the theater because I love theater and what it can achieve. In this case, I am won over by Gloria Estefan and her work and her husband and the people who play them. 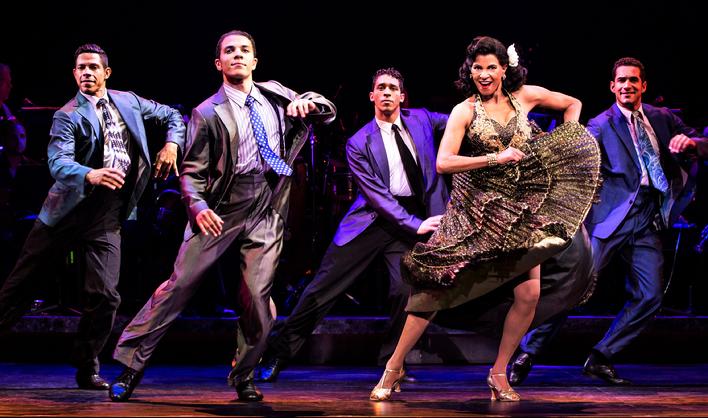 Doreen Montalvo and the boys in the Proctors production of ‘On Your Feet! The Emilio & Gloria Estefan Broadway Musical.’ Photo: Matthew Murphy

On Your Feet! continues its brief run at Proctors, 452 State Street, Schenectady, New York, through Sunday, June 3. For information and tickets, see the Berkshire Edge calendar, go to www.proctors.org, or call the box office at (518) 346-6204.