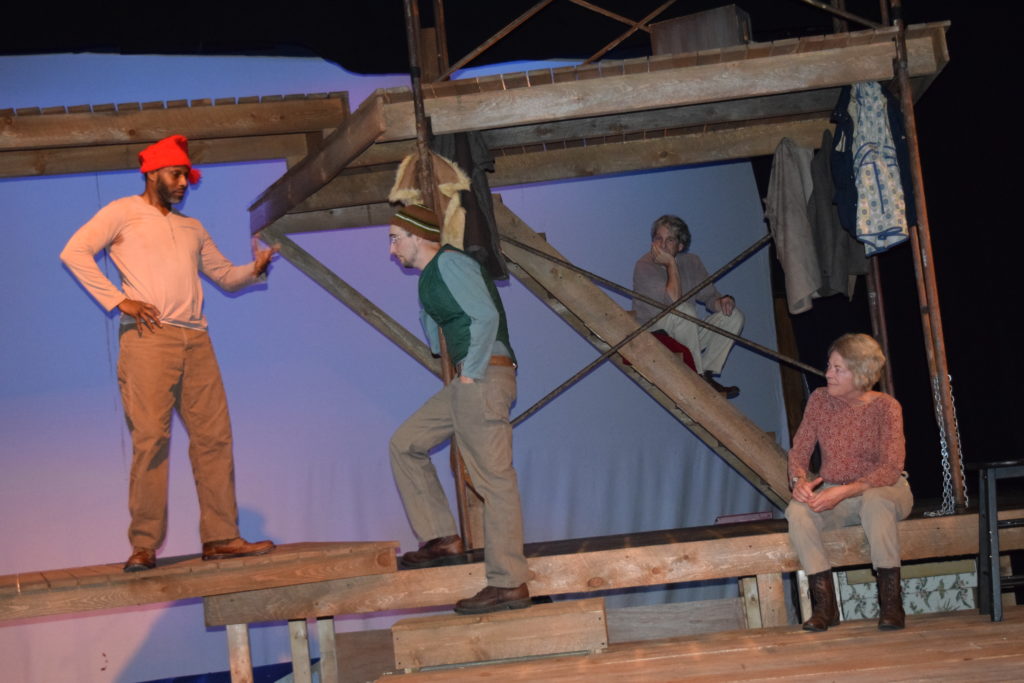 Set in a bucolic town or village somewhere in northern Vermont, “Judevine” is currently back onstage at Oldcastle Theatre in Bennington in southern Vermont. In the past, this theater has done five versions of this play: a one-act, one-actor version; the two-act (which this is); a four-act; and a three-act version. Artistic director Eric Peterson is devoted to it. Based on what is available this time around, it is a good work, grounded in plays like Dylan Thomas’ “Under Milk Wood,” Edgar Lee Masters’ “Spoon River Anthology” or even Thornton Wilder’s “Our Town,” all of which have made this form acceptable to audiences. This time around it is David Budbill’s poems and personality sketches that have created the theater piece. It’s a very worthwhile evening. 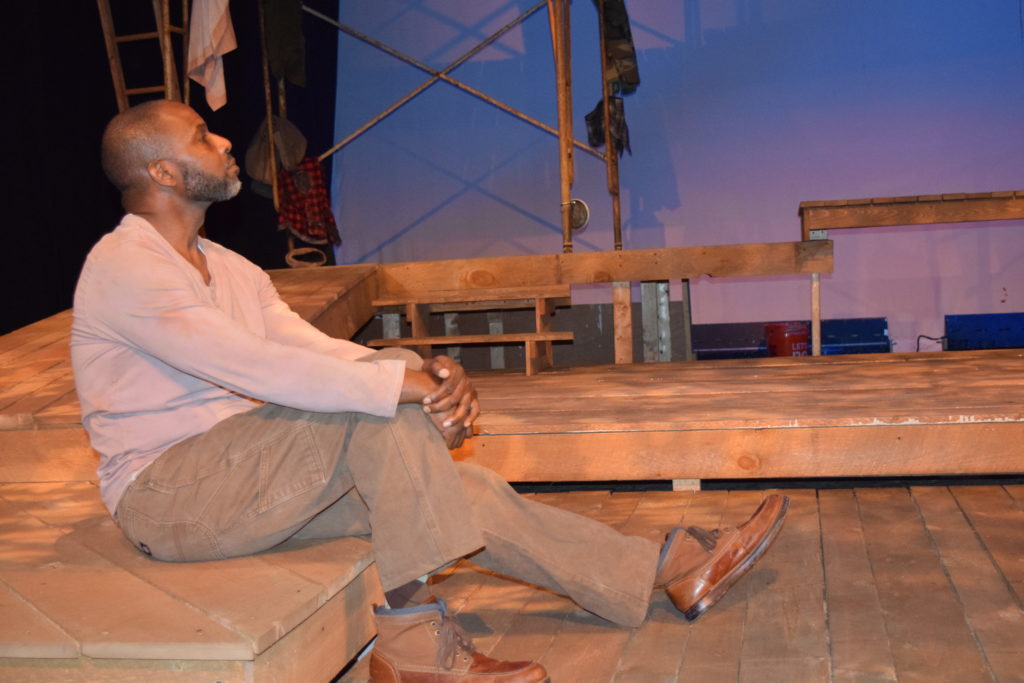 A cast of six actors play at least 16 characters and participate in the choral arrangements of Budbill’s poetic sequences. Each character’s story is played out in full and we learn that this upstate town is filled with the most interesting folks, including French-Black day-workers, prejudiced lumberjacks, auto mechanics with magic hands, happy couples, unhappy couples, romantics, cynics, crazy people and people whose prejudices run deep. The joy in watching these six actors comes from the wonderful differences they are able to bring to every character they portray. In the opening sequence as they bounce, line by line, from one character to another, the vocal and sometimes physical peculiarities of each person played can be confusing, but once you realize what’s going on, the chorale becomes a collection of small solos that blend or transition in a remarkable fashion. What could be confusing becomes fascinating. And it remains true to its original poetry, too.

Kevin Craig West plays the town Lothario, Antoine, whose accent occasionally makes his dialogue too difficult to hear and comprehend. But other than that, West is a wonderful identifier of his people with total voice, personality, appearance and physicality alterations. Of the six actors, he is one of the best, and he often dominates the stage. 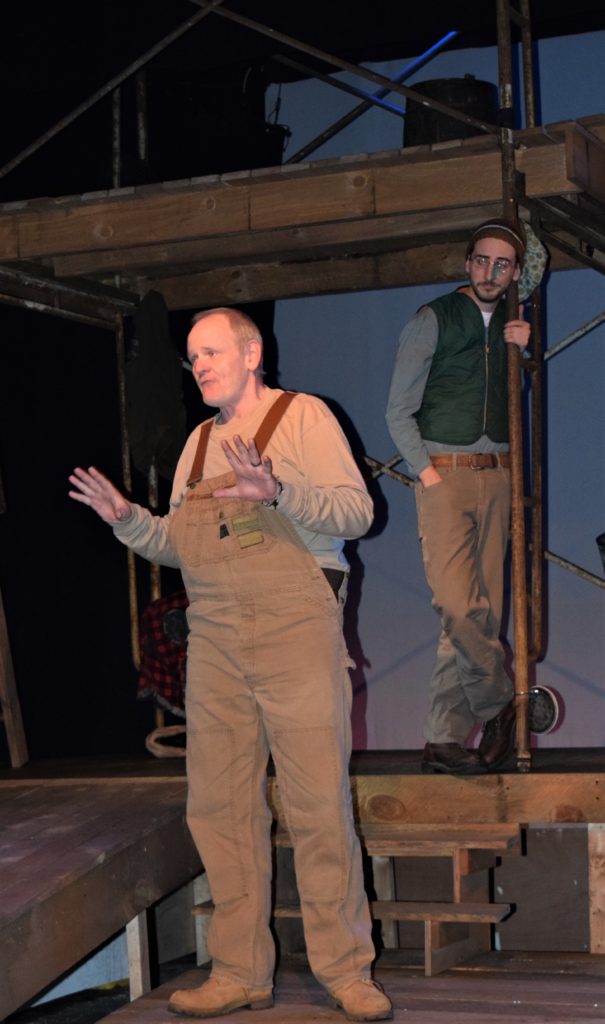 The stage is a collection of different, rough-hewn platforms, stairways and a ramp designed by David V. Groupe, who has also designed the lighting for the show. The lighting is most effective and the set provides performance spaces that come to mean very much. The simple costumes, which occasionally take additional pieces to define a new character, are designed by Ursula McCarty.

Justin Pietropaolo plays David, the narrator, among other characters. If I didn’t recognize the nomenclature parallel, it would be obvious from the words he speaks that he is author David Budbill. The actor even bears a strong resemblance to the poet himself. Pietropaolo plays a whole host of other residents of the small town, but this is his most explicit and recurring part, and he carries it beautifully.

Duncan M. Rogers, tall and imposing, is a wonderful counterpoint to “David,” and his roles often include some hard movement or rhythmic reinforcement, and when it comes to turning on the bigotry that sometimes a whole town can feel but not express, Rogers handles that masterfully, upsetting the audience more than the actor he addresses. It is a very impressive moment in the play when that happens. 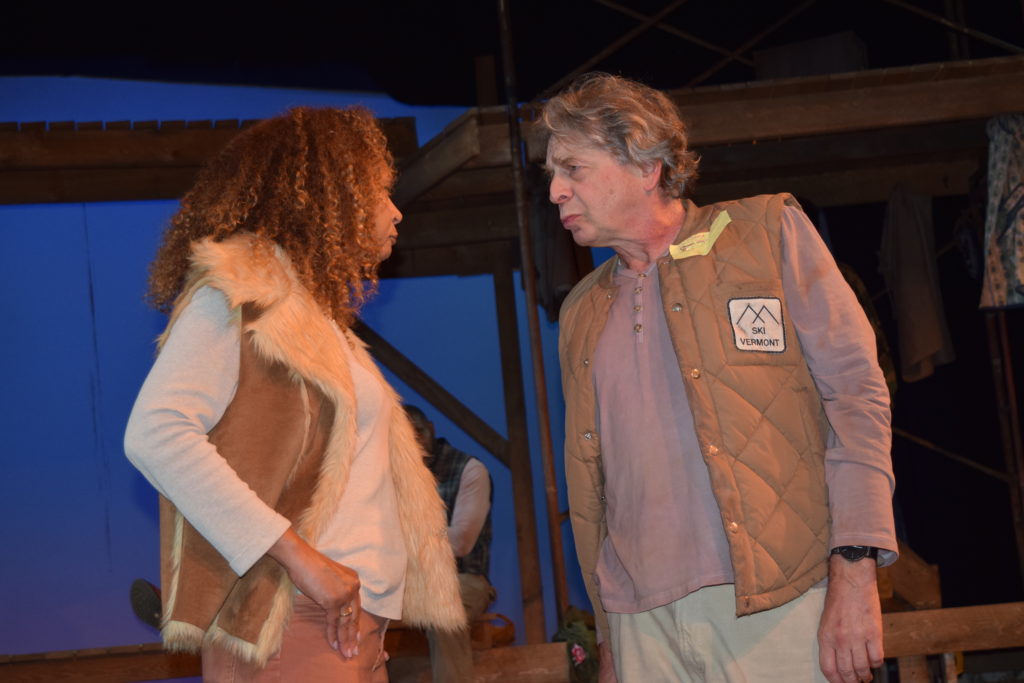 Richard Howe does a fine job with all of his characters, from reprobates to scholars. He brings his own set of skills to bear on the more unusual men he portrays and when he can fall into a nearly reverential tone about another character, his natural charm smiles through like the sun might do under similar circumstances.

Christine Decker runs the gamut of ages for townspeople in this play and she does what she always does: plays the hell out of them. Decker is a very honest actor and nuance is her best offensive on the field of diverse and wonderful people she portrays.

For whatever reason the content of the play isn’t as satisfying as it is in the three shows cited above. This is still an effective and affecting play about small-town life, post-Vietnam era in the outer reaches of America. It has received more than 63 productions in over 22 states and should most probably have been seen more and in a wider circle of theaters. Hopefully it will be.

In the meantime it can be seen and appreciated by regional theatergoers in our neck of the woods (where some scenes are played, actually). Oldcastle keeps bringing it back to its stage and the reason why is very clear: It shows off the variety of human experiences in Vermont in a most poetic way.

Judevine plays at Oldcastle Theatre, 331 Main St., Bennington, Vermont, through Sunday, Sept. 1. For information and tickets, see the Berkshire Edge calendar, call the box office at (802) 447-0564 or go to oldcastletheatre.org.