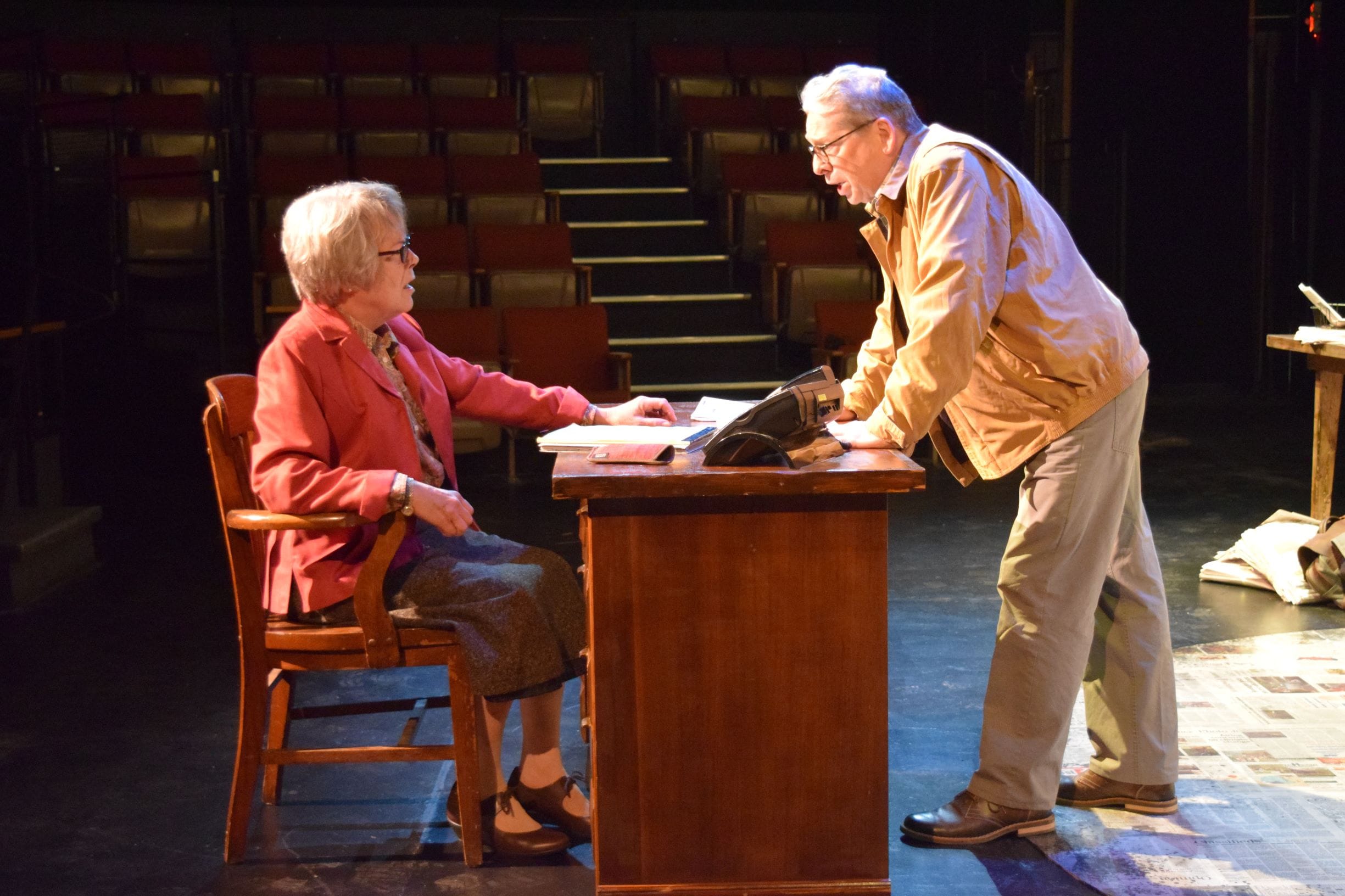 “The writing’s been on the wall for months.”

Nothing profits a failing newspaper better than a juicy local scandal that persists for months. That is what happens to a small hometown paper in Walloomsac, Vermont, when a young reporter discovers that his tap water is not just discolored, it’s toxic. In Eric Peterson’s new play “Water, Water, Everywhere,” now having its word premiere production at Oldcastle Theatre Company in Bennington, Vermont, the paper that is about to be shut down begins to lead a crusade to restore, refine and repair the water systems while exposing the people who have caused much of the problem. But the real problem is the play itself; while it is well-written and well-produced, it falls short in some areas and the show ends without giving the audience a satisfying conclusion. Questions abound and no answers are offered.

Two company regulars play key roles: Richard Howe as Ethan Corcoran, a businessman whose company is partially responsible for the poisoned water; and Christine Decker as retired journalist Katherine Dwyer, who comes out of retirement to edit the paper and spearhead the campaign for restitution. Howe is dynamic as the man who knows almost from the outset that he will be brought into the fray. Howe’s performance on opening night was somewhat lackluster and perhaps that is due to his character’s complacency about Decker’s character. He tells Chandler Tillsbury (played by David Snider) that in 50 years, he’s never won an argument with her and doesn’t expect any change this time. A line like that can set up an actor to play that lack of emotional achievement.

Decker is marvelous. She brings fire to her role. She is dealing with a small, young staff without expertise who want to succeed in what has become a professional mission. As she becomes more enthusiastic about her part in exposing the folks behind the disaster of expanding PFOA in the town’s water, she becomes a virtual virago, a woman with a mission for whom nothing less than perfect success and its rewards will do. When she triumphs over the man she has quietly loved for years, she is a modern Lysistrata, happy in her plan but saddened in her personal loss. Decker’s enthusiasm grows throughout the play, as does her strength, and she is certainly the ultimate heroine, the perfect general in a war against greed and evil.

As cub reporter Nick, Ed Rosini brings a heartfelt zip onto the stage. He has energy to burn and when he turns it into admiration for his fellow reporter, it is almost sensual. Playing one half of a colluding duo with an avid goal in mind, Rosini, backpack in hand, comes through the play with a youthful enthusiasm that never loses steam and never gives up the ultimate goal: righting wrongs. He is a do-gooder who never understands what he’s doing and when he fails at an assignment, he can only find a new goal to assuage his disappointment. Rosini is wonderful in this part. He gives youth a new look and feel as he roars with an uncommon roar, hoping to save the paper for Nora and replicate the success of his hero Willian Allen White, historic newpaperman, revolutionist and Pulitzer-Prize winner.

Halley Cianfarini plays Nora, a longtime employee who is in charge of the failing daily in lieu of a new editor. She loves her work and hates the concept of losing the newspaper. She finds Nick amusing but has no interest in him until well after he finds the scandal that ultimately absorbs her and her altering moods. Cianfarini, a Pittsfield, Massachusetts, native, delivers nicely on every element of her character. Nora is the sort of woman who takes blame much more easily than she takes credit. This gives her an air of indifference that made her part in the play almost too human and not enough a female Nick (yes, I know — Nick and Nora — they talk about it in the play). While Cianfarini’s Nora is at the heart of the play, she is not the actual center: That is reserved for Decker’s Mrs. Dwyer.

David Snider as the prime suspect in the water and land poisoning is great and powerful. Literally the man behind the screen, he plays his part in this new play with quiet and subdued power, and he is almost frightening in his scene with Nora.

Two other actors round out the company, playing 22 additional characters. Patrick Ellison Shea is, among other things, Walloomsac’s “Deep Throat,” a despicable police chief, a doctor and several townspeople. He does them well.

Natalie Wilder plays a bartender, the mayor, a governor’s spokesperson and many others nicely, though her voice never really changes, which keeps the actress apparent rather than the individual people she portrays.

It is the play itself that suffers the most with this exposure. The first act, 90 minutes or so, moves slowly and has dull patches in what are otherwise witty and warm scenes. It sets up the problem and the pursuit but ends on a whimper instead of a whisper of discovery. The second act — traditionally where the problems lie in a new, untried work — moves more swiftly and is much more engaging, but even it has a problem. The play ends without its third act denouement. While the ending seems inevitable and even predictable, the play just stops short of tying the knots in the shoelaces. While an intriguing place to pause, it is just not the place to end.

Peterson’s writing is professional with charm, wit and dramatic tension. His stage-direction work is exemplary with wonderful imagistic placements. Perhaps doing both simultaneously in this case was too much to ask. Possibly the production elements — nicely rendered by William John Auperlee (sets), Ursula McCarty (costumes), David M. Groupé (lighting) and sound (Cory Wheat) — were one thing too many in preparing this premiere.

Still, the elements of this piece jibe nicely, enhance the mystery elements of the story and promote a sense of local history as theater that may be much needed in this current political climate where self-satisfaction at the expense of others is becoming a way of life. I liked the play and the experience and hope that the next production may give the author time to change what needs to be better and strengthen what is already terrific.