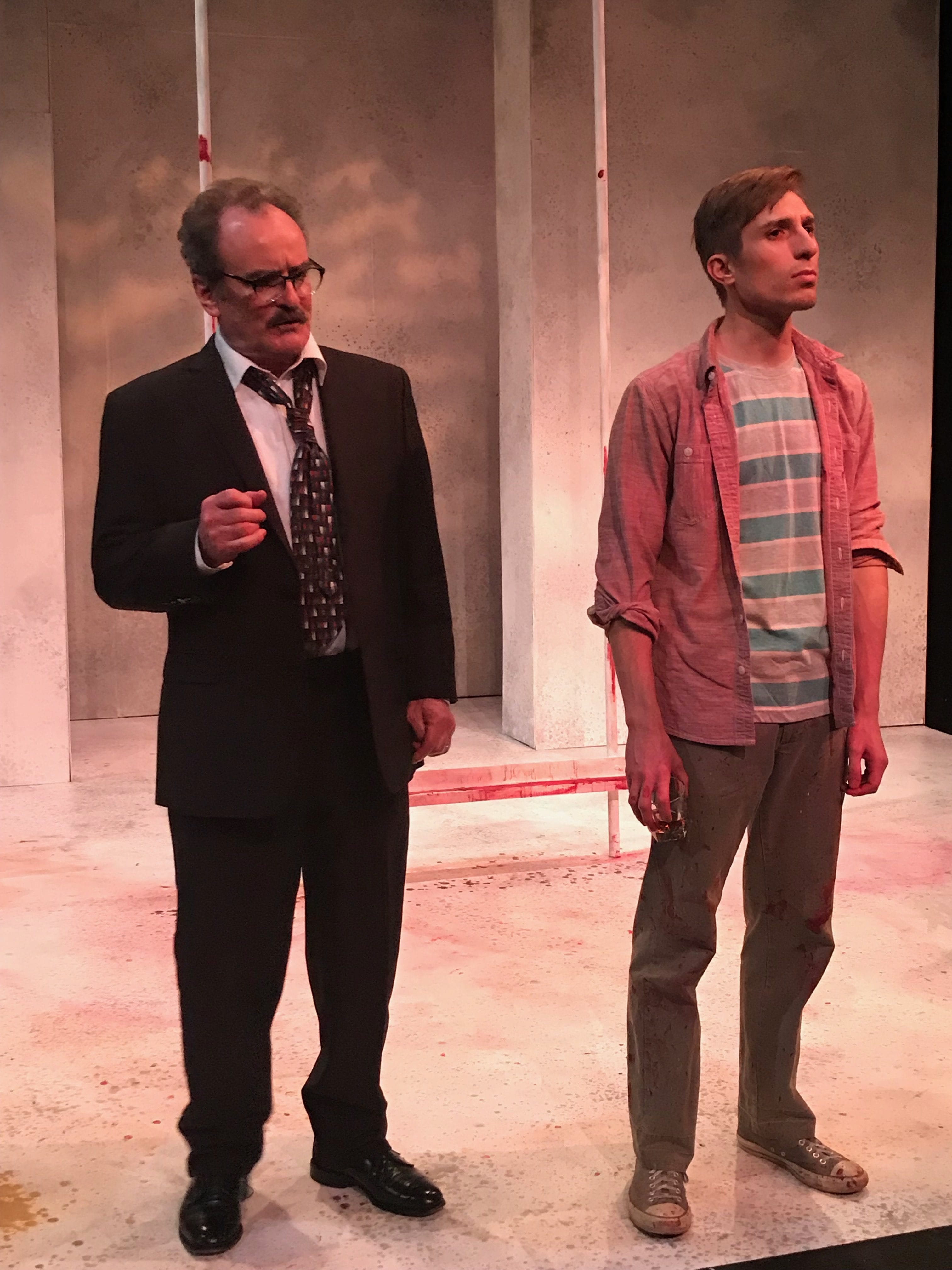 John Logan’s play about the artist Mark Rothko has been given a first-rate production at Oldcastle Theatre in Bennington, Vermont. This is a fine example of a very good play taken under the talented wing of a very good director, Eric Peterson, who has worked with an expert cast to showcase the unusual point of view, take it further than any other production I’ve seen and bring true humanity into one of the most textually difficult characters ever created.

Rothko has been commissioned to create a work to grace the walls of a new restaurant, the Four Seasons, and he has employed a young artist/assistant to work with him. The play deals with their awkward relationship as much as it deals with his unique artforms.

Marc Rothko is best known as one of the central figures of the abstract expressionist movement in American art in the 1950s and ’60s. Basically using two colors in any work, for his commission he took his closed boxes and opened the lower edge to create a semblance of doors instead. He completed three different sets of murals before returning the commission money and refusing to allow his work to be used in the restaurant. The play deals with the change of heart in the artist regarding the use and display of his work.

Brendan McGrady plays the artist’s assistant Ken, eager to fetch coffee, Chinese food and anything else the esteemed artist might need. His delight at this assignment is based on a reverence for the modernist movements in art, though his heart is set on more traditional forms. The 92-minute play in one act is divided into five scenes covering almost two years, and it isn’t until the middle of Scene 4 that the play catches fire when Ken finally speaks his honest opinions of Rothko and his vision. McGrady, who has been playing with small, finessed expressions up to this point, allows his opinions and his emotions to burst forth into actual fire. It is hard to believe that a man like Ken could contain himself for so long, but this moment in the play is certainly justified and the outcome of his outburst provides the much-needed drama of interaction.

It is Rothko, played by Peter Langstaff, that justifies this change in Ken. Instead of being an angry artist, Langstaff’s Rothko is a deeply self-centered man who cannot tolerate anyone else’s opinions, feelings or concepts. He is never interactive, just demanding. He never tolerant, only intimidating. If there is an opinion, it is his own. If there is a need for contemplation, it must be accepted and joined. Langstaff’s Rothko is a man who keeps all others at arm’s length and that satisfies his need for interaction.

There is no cruelty in this man, only the unshakeable knowledge that he holds everything, every card, every thought that is to be tolerated. Langstaff plays this attitude with a sharp, definitive look that varies now and then as Ken begins to exhibit Rothko-like tendencies. At one point they prepare a canvas together and it is clear they understand how to show compatibility.

Under Peterson’s careful direction, Langstaff uses facial expressions that provide a clear picture of his mental process as the character. The director’s work is remarkable but perhaps it is his familiarity with this actor that allows such communication to hold onto the character they have jointly created.

A lot of help comes from the superb design team, in particular the lighting design work of David V. Groupe, which alters subtly with every mood change in Rothko. Wm. John Aupperlee’s set has a defined space—Rothko’s studio—that Ken breaks from into a more special world of dark and undefined reality. Ursula McCarty’s costumes don’t confine the actors to a period of time but rather to a sense of personal choice and character definition.

Cory Wheat’s musical sound design work is wonderful, underscoring mood and mindset for Rothko and sometimes for Ken, as well. Perhaps no other design element does as much to keep the actors on track for their emotional needs.

Peterson’s take on the play and its characters has given the show a very keen realism that I haven’t seen before. I have enjoyed other Rothkos, particularly Tim Daly in a production at Dorset Theatre Festival, but Langstaff has shown me the pathways to the vulnerable human being inside the rigid artist—that alone makes this production a necessary one to see.