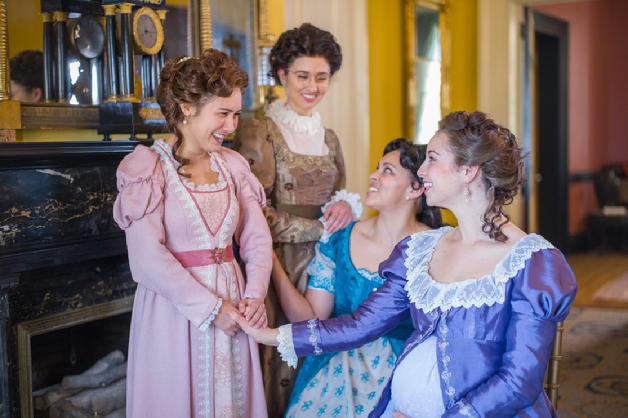 Three days in 1815 with the Bennet sisters

Has anyone not read, or seen a version of Jane Austen’s “Pride and Prejudice”? Well, if, by some chance, you have managed to avoid this classic, in the program for “Miss Bennet: Christmas at Pemberley” there is a snappy three-paragraph summary of the highlights of the book that ends about three years before the incidents of this play.

Elizabeth Bennet has married Fitzwilliam Darcy; Jane Bennet has married Charles Bingley; Lydia Bennet has married Mr. Wickham; Mary Bennet is still single in spite of her skill at the pianoforte; the fifth Bennet girl has stayed at home with her parents; and Lady Catherine de Bourgh has died, leaving her daughter, Anne, unmarried, desperate and bitter. The Darcys are hosting a family gathering just prior to Christmas and an unexpected guest arrives: Lady Catherine’s legal heir, Arthur de Bourgh, on whose heels the bereaved survivor, Anne, follows. The elder Bennets, along with the youngest sister, are due any moment. There you have the setup for this snappy play that plays with Austen’s memorable characters in its own memorable way.

Two servants, James and Alice, accompany much of the play’s action at the pianoforte and on the violin in the salon at Pemberley. The music they offer is by Beethoven, Corelli, Handel, Haydn, Schubert, Rameau, Pleyel and others. These roles are delightfully performed by Josh D. Smith and Lauren Wainwright, and the ease with which they move in and out of the scene is perfectly staged: They are never intrusive and always appreciated.

In a classic manner, the plot unfolds as two people fall in love and are threatened by the thought of expressing such an emotion. One character overwhelms this situation with a unique perspective on human relationships. Another decides that flirtation, her God-given right, must be employed to take charge of a situation she doesn’t appreciate. Two others flaunt their marital happiness and Elizabeth, always a feisty lass, works hard at impressing everyone that a German Christmas tradition should be translated into the British home at any cost. In just under two hours (with an intermission), these Austen creations play with wit, charm, hostility and more, covering a three-day house party with staggering accuracy until the happiest of Christmas Day presents wraps up the event with the inevitable ending.

I really liked this production, but there were few surprises in it. Perhaps loyalty to the original provided inherent clues to the progress of the romance, gave way to the saving of a soul, moved on to the family reality of mutual support. But in reality it is the performances and the physical production that gave me the most joy. A beautiful set by Brian Prather gave romance an opportunity to surprise us. Excellent costumes by Howard Tavi Kaplan lent a certain stylish romanticism to the period piece, with attractive and appropriate wigs created by Michael Dunn. Subtle lighting, appended with sconces, by Travis McHale continued the theatrical illusion of the year 1815.

As for the company, let me start with the men. The weekend’s host, Fitzwilliam Darcy, is played by Grayson Powell: tall, slender, striking and immediately appealing. Not quite the aristocrat played by Laurence Olivier, he is a much more genteel and gentle man in this play. His friend and now brother-in-law, Charles Bingley, is played here by Patrick Andrew Jones. Like Powell, he brings a different sense of the character to this play, more amusing and more involved than usual. He is quick to embrace, sweet and accommodating at all times. Arthur de Bourgh is wonderfully interpreted by Sean Mellott. He is the most unromantic of romantic heroes and his furtive movements, his ardent attempts at understanding the responsibilities of love, are a constant joy. Mellott brings us a man who has no understanding of human relationships, who has three days in which to grasp his possibilities and who must achieve a goal or lose himself entirely. We are with him all the way.

And now the women: Marielle Young gives the flighty Lydia Wickham an almost birdlike quality as she flits from one part of the set to another. She is pretty, graceful and most amusing. Caroline Whelehan is visibly pregnant as Jane Bingley and she cradles her unborn child with a sweetness that is almost emotionally overwhelming at times. Jane is a most cherishable character in her capable hands. Kelsey Rainwater brings a youthfulness to Elizabeth, whose enthusiasm for this holiday is her principal motive. Gone is the sharp wit and eagerly anticipated snap that Greer Garson gave the role. These are replaced by honesty and charm, and they are equally appreciated. The intellectual and musical sister, Mary Bennet, is played wonderfully by Connie Costanzo. Mary is not a heroine in the classic sense; she is too sharp and self-possessed for that. Watching her wax and wane in the romance that plays out is a perfect joy. Finally, the impressive Ellen Cribbs, looking and sounding like a young Mildred Natwick, brings Anne de Bourgh to the party as the perfect party pooper. I found her work most amusing, and loved each of her many entrances and flourishes and kept wanting more of them.

That sense of anticipation is due in part to the wonderful timing imparted to this company by its director, Maggie Mancinelli-Cahill. Even in those few moments when the play is still and motionless, there is a sense of time slipping away and urgency prompting action. The director has moved her “family” into and out of closeness without ever allowing a moment to be cloying or maudlin. What the play itself lacks in surprise, she has given it in the physical ways in which these characters interact. It is a lovely production, a Christmas gift much appreciated in the age of the usual elf or Scrooge productions. I urge you to see it.