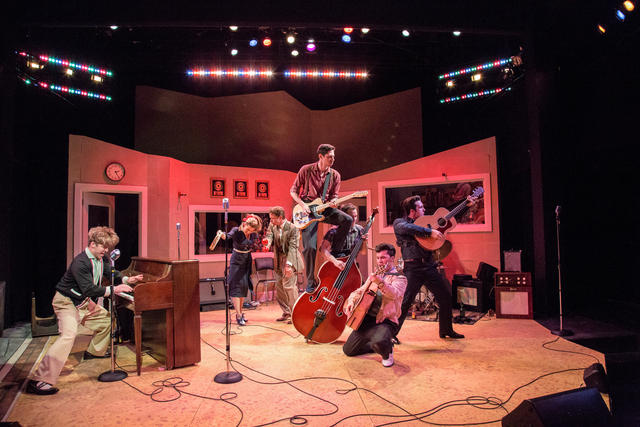 Right from the lightning opening number “Blue Suede Shoes,” Berkshire Theatre Group’s joyous production of “Million Dollar Quartet” is nothin’ short of a roof-raisin’, foot-stompin’, guitar-strummin’, bass-pluckin’, hand-clappin’ celebration of American-as-apple-pie rock ‘n’ roll. It’s a wonder how the Unicorn can hold all that energy and talent on its tiny stage and all the love for rock ‘n’ roll that overflows into its 122-seat theater.

The recording studio of Sam Phillips’ Sun Records in Memphis, Tennessee, was the place and Dec. 4, 1956, was the date where and when four rock n’ roll legends – Elvis Presley, Jerry Lee Lewis, Carl Perkins and Johnny Cash – played together in an impromptu jam session. “Million Dollar Qyartet,” which ran on Broadway in 2010, dramatizes, in a savvy book by Colin Escott and Floyd Mutrux, what might have happened on that historic day. This 100-minute fireball of a show, played without intermission, isn’t just a musical revue or cliché jukebox musical, although its 21 numbers include chart-toppers like “Sixteen Tons,” “Great Balls of Fire,” “See You Later, Alligator” and “Hound Dog.” All of the legends are fleshed out with down-home recollections of growing up Southern poor and with enough dirt-kickin’ personality to make real how new, bold strands of country and folk music mixed with Black rhythms and blues gave voice and how they hungered for money and success. What’s more, each actor – Gabriel Aronson, Brycen Katolinsky, Bill Sheets and Colin Summers as Lewis, Presley, Cash and Perkins – is a musician in top form. Just watch Aronson as Jerry Lee Lewis on the piano: wow! The performances aren’t paint-by-number impersonations; they’re jaw-dropping interpretations of vocals, style and movement. Check out what Katolinksy does with Elvis’ rubber legs and swivel hips.

Ben Nordstrom as entrepreneur and record producer Phillips carries the narrative weight, bearing the emotional and financial costs of losing the talent he discovered to the big record companies like RCA and Columbia. Through him, “Million Dollar Quartet” peeks presciently at the billion-dollar business rock ‘n’ roll became, and how it forever changed American pop culture. The quartet and Phillips are joined by Elvis’ girlfriend, played by Christy Coco who delivers a knockout “Fever” and “I Hear You Knockin’,” and David W. Lincoln as Fluke the studio drummer and Nathan Yates Douglass as Perkins’ brother, the bass player.

Actor James Barry, making his directorial debut, orchestrates stage and music direction seamlessly, having played Perkins on national tour. He optimizes action on Jessica Ford’s fixed, trim, recording-studio set, above which are projections, inventively designed by Nicholas Hussong, of news clippings and photos of actual events. Ingeniously Berry creates a whole new prologue for “Million Dollar Quartet,” projecting a quote from Bob Dylan: “Rock and roll was a dangerous weapon… it exploded like the atomic bomb… people feared the end of time…Rock and Roll made you oblivious to the fear.” (It ties-in to a reference to “atomic bomb” from a throwaway comment Johnny Cash makes to Jerry Lee Lewis in a sidebar convo late in the play).

The prologue provides context, but Barry doesn’t bang us over the head with it; he just lets it sink in, anticipating wistful reminders in Escott and Mutrux’s script that rock ‘n’ roll wasn’t apple-pie American in the beginning. It’s now mostly forgotten that most Americans saw rock ‘n’ roll as politically subversive (“Communist!”), morally corrupt (“the devil’s work”) or unacceptably non-white (“race music”).

All of which is not to intellectualize “Million Dollar Quartet,” but to emphasize how smart BTG’s production is at being so informed, so passionate, so much fun and so damn entertaining about the music it celebrates. I mean, when have you seen a musical that has not one but four final numbers? Get over to the Unicorn in Stockbridge: There’s a “Whole Lotta Shakin’” goin’ on.

Million Dollar Quartet plays at the Unicorn Theatre, 6 East St., Stockbridge, through Sunday, July 15. For tickets and information, see the Berkshire Edge calendar, call the box office at (413) 997-4444 or go online to www.BerkshireTheatreGroup.org.