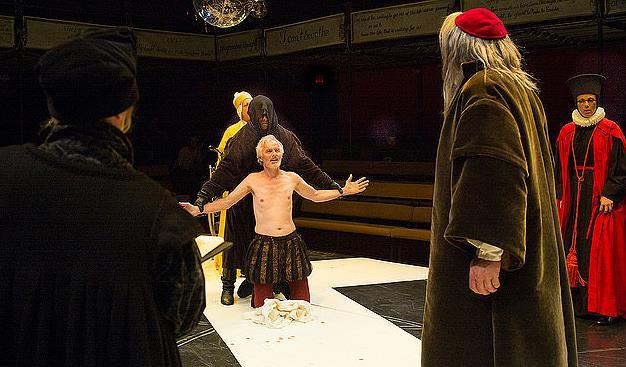 The Merchant of Venice
By William Shakespeare
Directed by Tina Packer

“Yes, Shylock, I will seal unto this bond.”

William Shakespeare was a master at the mismatched lovers plot. He proved it again and again in his comedies and his tragedies. In the light-hearted “A Midsummer Night’s Dream,” all of the characters end up in romantic interludes with the wrong people. In the dramatic play that preceded it, “Romeo and Juliet,” there can be no more unfortunate couple. “The Taming of the Shrew” is all about mismatched romantics and their outrageous behavior. And, two plays later, in 1596, he wrote a comedy about multiple romances that are troubled from beginning to end. This was “The Merchant of Venice,” currently onstage at Shakespeare and Company in Lenox, Massachusetts.

A perfectly wonderful cast is playing the men and women who should probably never have met. Bassanio loves Portia, a woman from another town, who also loves him but is forced by laws of inheritance to marry a man who can discover her true value in one of three caskets packed by her deceased father. Antonio, the merchant of the title, loves Bassanio, which is a difficulty of its own. Jessica, the Jewess, loves Lorenzo the Christian (you can figure out the difficulty here). Graziano and Nerissa fall in love, which complicates his relationship with just about everyone else in the play. Shylock loves his daughter with a passion beyond true understanding. Shylock also loves Antonio and the concept of that love turns into a passionate hatred and resentment that leads to revenge for his not being loved in return, but rather being reviled for his Jewish heritage. Sometimes keeping all this straight is very difficult, especially the motives of Bassanio and Shylock.

When Antonio’s ships are at sea, he lends money to Bassanio to go off and woo Portia. Antonio borrows the money from Shylock who demands a pledge for the return of the money or a forfeit – a pound of Antonio’s flesh. Antonio pledges willingly and gladly to help his beloved Bassanio, never fearing the safe return of his armada. Jessica, meanwhile, flees her father’s control and runs off with Lorenzo who seeks refuge in Portia’s house. Angered by his treatment at the hands of “noble” Venetians (Jews were limited in Venice to a region called the Ghetto and were considered third-class citizens) and the loss of his daughter, Shylock seeks his revenge by demanding the forfeit when Antonio cannot pay on time. Portia and Bassanio are bound by a pledge that he doesn’t honor and she treats him as terribly as Nerissa, her maid, treats Graziano. But guess what? Happy endings are all around and, to complete the 16th century picture of happiness, Shylock is compelled to deny his God and turn Catholic.

Shakespeare made many mistakes with his Shylock. The laws of Kashruth would not permit him to take a pound of Antonio’s flesh without first purging the man of his blood, for the meat removed would not be of any value in his community. I always think he should approach the Merchant in the trial scene not with a knife, but with a pail of leeches. Of course, this would make Portia’s big moment impossible, but so it goes.

The cast in Lenox is superb. The production is extraordinary. The theater has been redesigned to a full round, which limits some of their more usual physical trappings but works very well for this play about life in a city of islands. The costumes by Tyler Kinney are pure magic and Matthew Miller’s lighting is almost a shimmer off the waters of the lagoon. Daniel Levy’s music is evocative–modern when it needs to be, somewhat period when it ought to be. Kristin Wold’s choreography is fun and Jonathan Croy’s fight choreography is perfection. Tina Packer has directed her Company for the comic rather than the tragic imagery in the play and this works well; though there are some confusing moments where Shakespeare might have us worried, Packer sets us at ease.

John Hadden returns to this Company in the role of Antonio, the title character who appears only occasionally and whose romantic sensibilities set off the plot. He is a romance novel dream of a hero without a traditional heroine to torture, a Rochester whose Jane Eyre is a young man who never really gets what this friendship is all about. Hadden is right on top of everything and his playing sets a tone for the show which cannot be ignored just because Shakespeare doesn’t allot him as much stage time as he does the younger people.

Jonathan Epstein’s Shylock is sweet and sentimental and, when his outrage and anger come to dominate his choices, he is thrillingly aggressive and manages to justify the hatred that has been directed his way. As his daughter, Kate Abbruzzese brings a dark finesse to Jessica, her moods never easy to read and her motivations as uncertain as her love for Lorenzo. Bella Martin plays Nerissa with a nasty glint in her eye and she is delightful. Jason Asprey as her wicked lover Graziano is an amazingly peculiar man who finds a sort of salvation in his newfound positive affections.

Michael Fuchs and Thomas Brazzle are delicious clowns as the Gobbos. Erick Avari plays the Doge brilliantly and is also most enjoyable as Portia’s suitors. The rest of the Company transform themselves and disport through the streets of Venice at carnival time with humor and elegance.

Tamara Hickey brings a fabulous collection of emotional expressions to her Portia. In the third casket scene, hoping for the success of Bassanio, she wanders the stage in an ecstasy that is so sexual she inspires wild emotions from him and from us as well. In the court scene she is so rigidly manly that our reactions to her are as negative as they are to Shylock; in fact, her negativity here brings out the worst in him inspiring his final punishment.

Shahar Isaac is a beautifully nuanced Bassanio, the beloved of Portia and Antonio, and he holds center stage throughout the play. He plays as handsomely as anyone can in this role, a young man whose tendencies are always toward love and redemption through love. He is one of the great bisexual characters in all theater and Isaac allows himself to play both sides of his nature with a simple grace that is constantly charming.

Not your usual rendition of the play, this edition allows for imagination and nuanced creations and provides for the romantic nature of the play over the concept of prejudice and hatred that so often colors the work. Packer returns the play to its comedy status without sacrificing anything of the other elements and she leaves you wondering about its checkered past: that alone makes it worth a visit.

The Merchant of Venice plays on the Tina Packer Playhouse stage at Shakespeare and Company, 70 Kemble Street, Lenox, Mass., through Sunday, August 21. For tickets and information, see the Berkshire Edge calendar, call the box office at (413) 637-3353, or go online to www.shakespeare.org.