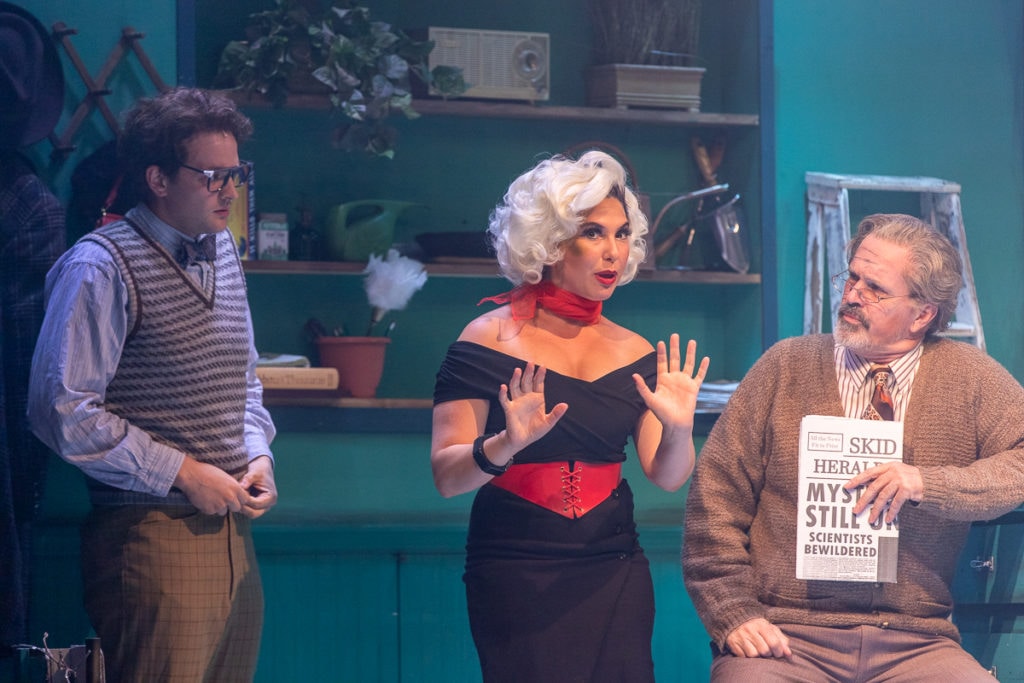 THEATRE REVIEW: Mac-Haydn’s ‘Little Shop of Horrors’ one of the best-cast shows of the season

“’Do you feed it anything special?’”

Loaded questions abound in this now-classic musical that almost every theater in the Berkshire region has staged over the past few years. The answer to the question above is simple: You feed it talent and it grows by leaps and bounds, even if the plant referred to is pot-bound. “Little Shop of Horrors” is being given a great big boost at the Mac-Haydn Theatre in Chatham, New York, and like its forebears, it is definitely on the upswing with its swinging tunes and the Mac’s talented company. 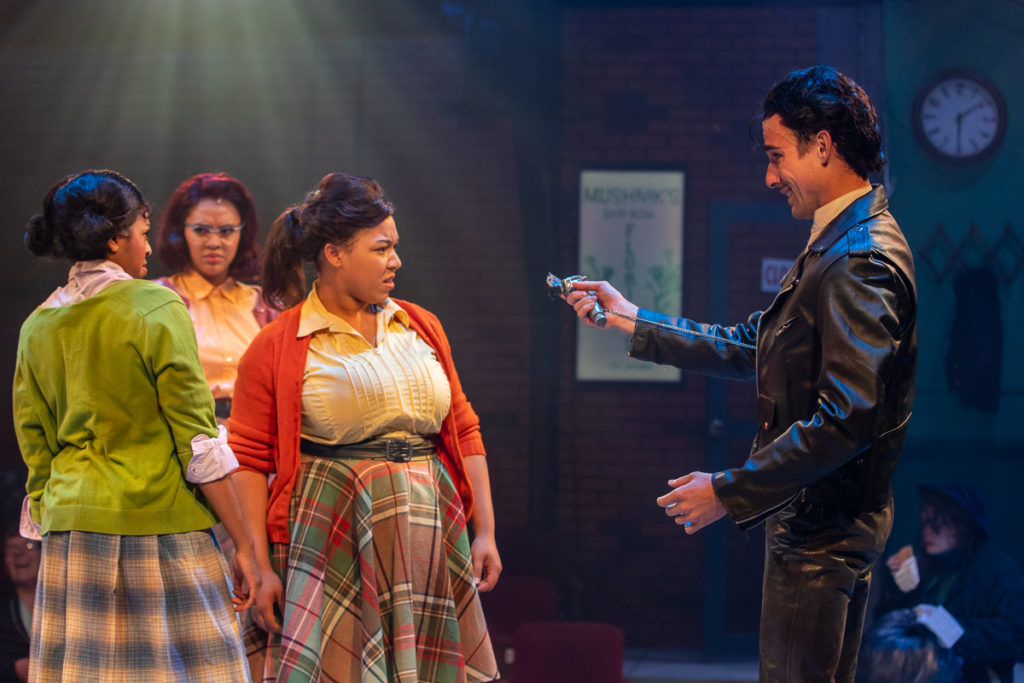 From their first moment on the stage, the trio of Ronnette (Maya Cuevas), Chiffon (Madi Cupp-Enyard) and Crystal (Angel Harrison) rule the stage. They set the mood, hold the rhythm and tell the tale right to the comic bitter end. Their story is a late-1950s urban legend about the mysterious plant from a foreign planet that takes over the earth by simply eating all the people. They sing about the origins of this conquest, and the awkward story of a young man who loves a young woman and who sacrifices everything for her sake, including her and ultimately himself. Based on a Grade-C flick that gave Jack Nicholson his start, this odd musical has conquered the world just as easily as Nicholson himself did, creating an image you cannot resist, and director Erin Spears Ledford brings it new life in Chatham, New York. She has taken it apart and put it back together again using one of the best-cast shows of the season.

Alecsys Proctor-Turner is a seductive-voiced and stunningly extended plant figure as Audrey II. Like the original bass-voice actor and the most recent drag-queen version, her Audrey II, co-played by puppeteer Atsushi Eda, will live to conquer new worlds with ease and accomplishment. 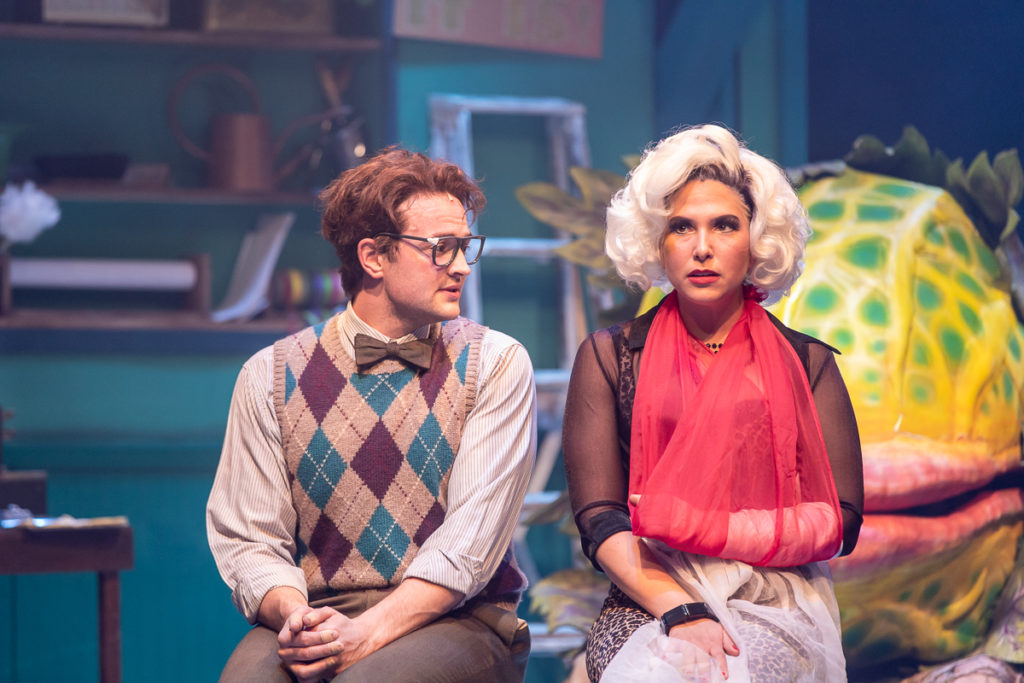 Andrew Burton Kelley as Seymour and Emily Kron as Audrey in the Mac-Haydn Theatre production of ‘Little Shop of Horrors.’ Photo: Ann Kielbasa

The sweet-voiced, sweet-faced Andrew Burton Kelley plays Seymour Krelborn, the young plant enthusiast who discovers the plant that he names after the girl he loves: Audrey. Much less nerdy than the usual Seymour, Kelley brings a vivacious charm to the character. He is endowed with a fine voice and disposition that allow him to be gentle one moment and invigorating the next. As a result his Seymour is available to his audience, bringing them to cheers with his song “Suddenly Seymour.”

He is aided at that moment by the wonderful Emily Kron (first winner of Outstanding Actress in a Musical from the Berkshire Theatre Critics Association in 2017) who makes Audrey the most sympathetic character in the show. Giving a perfect performance from her first “late” entrance to her final scene of loving sacrifice, she helps Ledford mold a show that is slightly less funny than usual, but certainly more honestly dramatic and romantic. It is the best of both worlds: not a Leonard Bernstein “West Side Story,” and not an Olson and Johnson “Hellzapoppin’,” but still a New York story set on Skid Row.

Audrey’s first love, at least in the two hours of the show, Orin Scrivello, is a dark, melodramatic, sadistic and laughing gas-loving dentist played by Pat Moran, who is also less funny than usual, but is still frighteningly real. Moran’s portrayal almost asks for his ultimate ending and watching him work his way into the food chain is beautifully played by this young actor. His song “Dentist” is certainly a highlight of the first act. 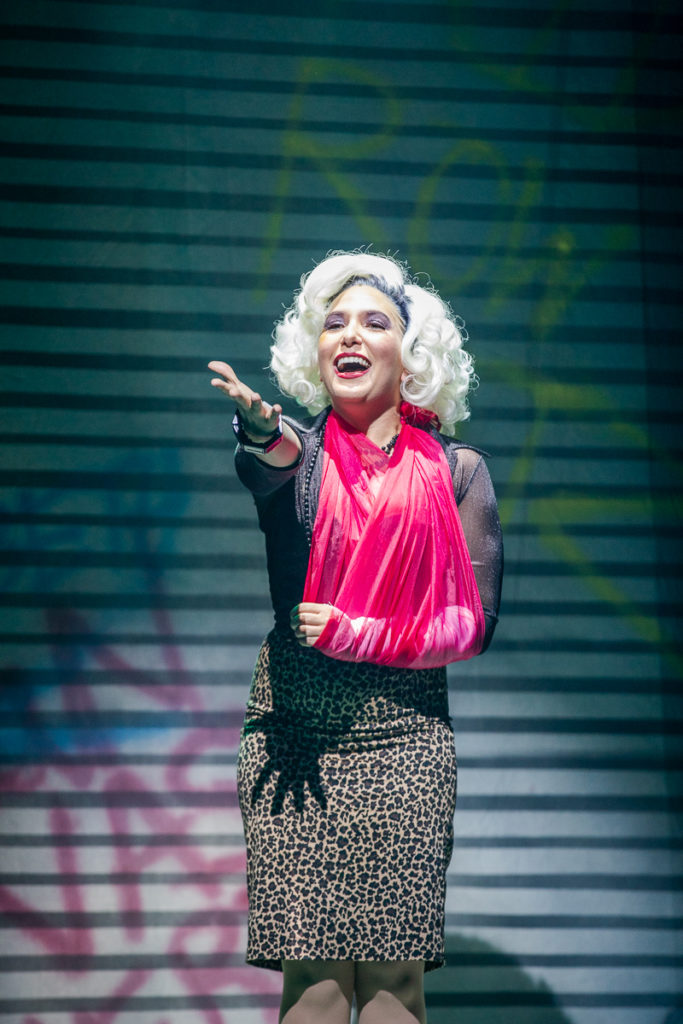 Seymour and Audrey work for Mr. Mushnik in his Skid Row flower shop. A man of few pleasant words, he is captured by Seymour’s plant and enchanted by the riches Audrey II brings to his business. Played here by George Dvorsky (last year’s winner for Outstanding Actor in a Musical at the Berkshire Theatre Critics Awards) with depth and strength, he brings yet another new take on a classic character who emerges much less a character than a fallible human being. For the first time in all these years of seeing this musical, his obsession with truth touched me viscerally, not with a laugh but with a sudden sense of apprehension about what may await him for his curiosity.

One of the nicest things about seeing this company work is the emergence from the corps of players of new, young stars. This has certainly been true for Kron from “Cabaret” to “Sweeney Todd” to “Horrors.” The same may be true for Kelley and Moran while Dvorsky remains a star in his own right. Having all four on the same stage turns a typical evening into one that smacks of miracles.

The same can be said for the show’s director, Erin Spears Ledford, who had managed to bring so much unbounded reality into a comic-strip musical. She is aided by the genius of choreographer Lauren Monteleone, whose period dances and movement make even the most tenuous musical numbers into integral parts of the stage picture.

The costumes designed by Alison Zador also give us the period perfectly, and the hair and makeup designed by Matthew Oliver aid and abet her work. David Maglione’s musical ensemble plays the score beautifully, and the entire production staff and the ensemble players (chorus and small parts) do their best work in this silly, amusing and emotionally fraught production. BRAVI!

Little Shop of Horrors plays at the Mac-Haydn Theatre, 1925 Route 203, Chatham, New York, through Sunday, Aug. 18. For information and tickets, see the Berkshire Edge calendar, call the box office at (518) 392-9292 or go to www.machaydntheatre.org.

— Emma Goldman
Read next: Reflections while participating in Yo-Yo Ma’s Day of Action