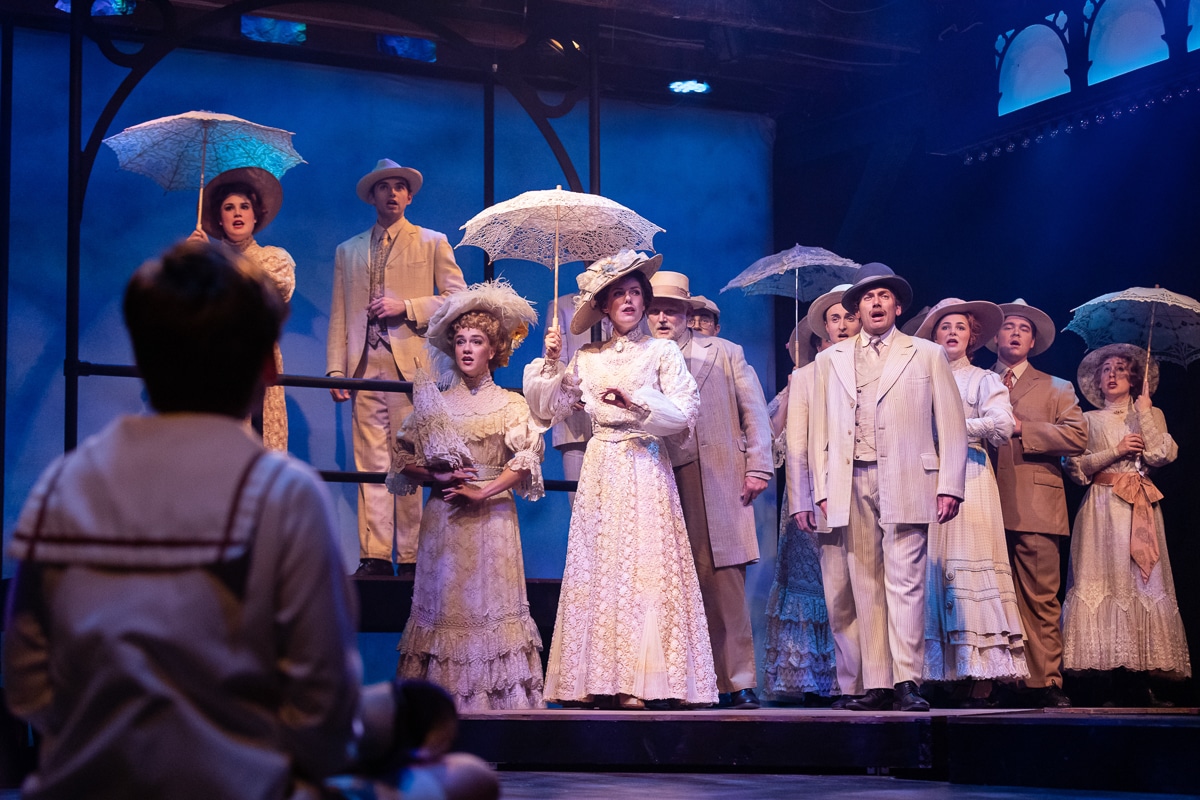 The company of the Mac-Haydn Theatre production of 'Ragtime.' Photo: Ann Kielbasa

Ragtime
Book by Terrence McNally, based on the novel by E.L. Doctorow
Lyrics by Lynn Ahrens
Music by Stephen Flaherty
Choreography by Sebastiani Romagnolo
Directed by John Saunders

Every few years someone has to mount a production of this musical, so every few years, I have to go see it. I don’t mind. It’s a wonderful show. I saw it twice on Broadway, first in 1998 and then in 2010 when it was revived. Production styles were very different and the show had changed, but the impact was the same. It floored me with its combination of American history, emotional writing and leitmotif music. Once each musical theme was established, its recurrent use ushered in feelings and thoughts that were inescapable—it was Richard Wagner-lite. Since then I’ve seen it twice more, always in productions that were concept-heavy and very well-done. This time I saw it in the round in a relatively small theater with the show and its audience in view and this time, for the first time, it was different: It was better, and it was absolutely right.

This is the story of three women and their effects on five men. It is also the story of New York City and New Rochelle at a time of major changes to our culture. The music of the nation was being altered by the contributions of the “Negro” race and by the newly emerging Jewish immigrants from Eastern Europe. In both cases minority groups were bringing new sounds and new concepts to the everyday lives of WASP whites. Irving Berlin and Scott Joplin were altering the rhythms of Americans and those rhythms were extending into politics through people like Emma Goldman, into entertainment through people like Harry Houdini and Evelyn Nesbit, as well as into education through the moving pictures from people like Max Linder and Erich von Stroheim. Blacks and whites living cheek by jowl was still a new concept and not one that sat well with everyone. The E. L. Doctorow novel “Ragtime” documented all of this, as did the film version and later this musical. It’s all here with lyrics that specifically point to the differences (“. . . and there were no Negroes . . “).

The friendship that sparks the plot between a young, poor black woman who abandons her baby in New Rochelle and the well-off white woman who finds the child hidden in her suburban garden is ultimately rich and rewarding, but it takes a long while to grow into such a relationship. Mother, whose story of growth and tolerant understanding is beautifully played by Rachel Rhodes-Devey, becomes the central figure in the show. Her beauty and her singing are top-notch and she gives emotional clarity to her every utterance, spoken or sung. Matching her note for note is Maya Cuevas as Sarah, whose death lights the flame of the plot for this show.

The third woman who causes things to happen is Evelyn Nesbit, (the wife of Harry K. Thaw), a Vaudeville personality whose beauty, allure and history inspires Younger Brother, played by Kylan Ross, to rebellion and misery. She is played by Sarah Kawalek who sings about Nesbit’s personal history in the song “The Crime of the Century,” and later about the early history of films in “Atlantic City.” Like Nesbit, known as the girl in the red velvet swing, Kawalek displays onstage charm and offstage diffidence. It’s a lovely performance of a historic figure.

Three people who should never have known one another in the normal course of things find their lives inexorably intertwined when Mother goes to bat for Coalhouse, a musician, reuniting him with Sarah, who is under her care. She is, later, underwhelmed at meeting Tateh, a Jewish immigrant, and it isn’t until their children become friends in Atlantic City that he moves fully into her orbit. The outcome, as opposites attract, is beautifully played by Rhodes-Devey and Gabe Belyeu, who seems to get better and better with every show he does at the Mac-Haydn. In this show his singing voice is almost ethereal and his character is among the most appealing he has ever undertaken. Belyeu also goes through physical changes as Tateh becomes more and more American, an example of assimilation like few I’ve ever seen. A major part of the success of this show is due to his fine work in this role.

Tyrell Reggins is a remarkable Coalhouse, bringing a gentleness into the gentleman he portrays here. In “The Gettin’ Ready Rag,” “New Music,” “Justice” and more, he expresses with musical finesse all of the emotions that tie Coalhouse Walker Jr. into our hearts and minds.

The children in this production are excellent. Paxton Brownell as the Little Boy, Clementine Kline as the Little Girl and Moriah Edmunds as Coalhouse III each have their effective moments and add to the tapestry of humanity this musical deals with from top to bottom.

There are so many characters in this large cast musical (36 players on the postage-stamp stage) that it is hard to single out just a few, but as Booker T. Washington is the excellent William Taitel, who also plays Matthew Henson, the contribution of Pittsfield, Massachusetts, to the Admiral Peary expedition to the North Pole. As Harry Houdini is the splendid Andrew Burton Kelley; Julie Galorenzo is a perfect Emma Goldman. Father is played to a tee by Steve Hassmer and the impulsive Younger Brother is wonderfully realized by Kylan Ross.

The first act finale was led by Alecsys Proctor-Turner as Sarah’s Friend and it was a rousing anthem indeed. In fact there was not one wrong performance or interpretation of a historic character in this show.

Production values for “Ragtime” are superb. Jimm Halliday’s costumes and costume coordination (there are over 300 costumes for this show) were fabulous. The set and lighting design, both by Andrew Gmoser, created a reality in the round that I wouldn’t have believed possible if I hadn’t see them for myself. Matthew Oliver’s wigs and makeup design was lush and professional and never delivered a moment of disbelief. David Maglione’s music direction for an ensemble of six musicians delivered beautiful music perfectly performed.

Of course the credit for all this perfection falls to two men who have been moving the Mac-Haydn out of the local and into the major regional theaters of this country: artistic and stage director John Saunders, and choreographer Sebastiani Romagnolo. There can be no doubt in anyone’s mind, once they see this production, that Saunders is a theatrical master, a genius of casting and a major force in musical theater direction, especially the theater-in-the-round tradition. His work on this show is precise, specific, emotionally rendered and theatrically telling. He is a master of both storytelling and musical staging and with the superb dances designed by Romagnolo to flow out of and into the dialogue without disturbing the story, not even the word “triumph” seems to be enough. If anyone reading this has any interest in theater at all, as a profession or as an avocation, this is what they should see. This is what all people in this industry should aspire to achieve. The final 10 minutes had me in tears: of relief, of joy, of anxiety and of despair. Someone out there name for me one other experience that delivers so much at one time. If I had the availability, I would attend every performance of this show, a show I’ve seen four times before and liked. This time I loved it.