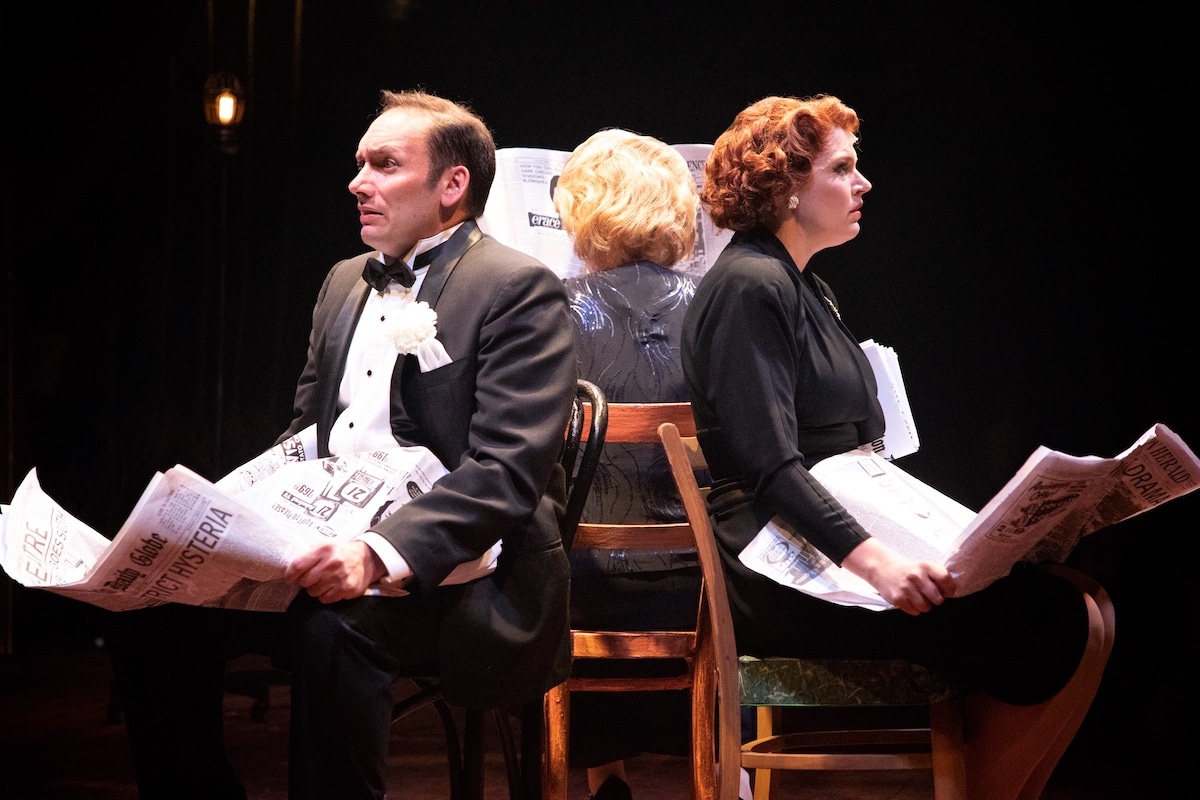 Curtains
Book by Rupert Holmes, based on an original concept and book by Peter Stone
Music by John Kander
Lyrics by Fred Ebb, John Kander and Rupert Holmes
Directed and choreographed by Courtney Laine Self

There aren’t as many musicals as funny as this one about a theater troupe confined to the theater for almost three days, although it helps if you know the right jokes. The story here is very theatrical, its characters almost exclusively theater folk involved in the Boston tryout of a new musical that is trying to outdo “Oklahoma!” Setting the classic tale of Robin Hood in the state of Kansas (“K.A.N.S.A.S. U.S.A.,” they all sing, mocking the final strain of the Rodgers and Hammerstein classic), this show combines three of my favorite theater elements—musical comedy, murder mystery and parody—into one outrageous jest that always leaves me laughing and crying at the same time.

As plots go this one is ridiculously simple with a series of complications that are mind-blowing. Opening night in Boston at the Colonial Theatre, the leading lady is murdered during the curtain call. A stage-struck detective handles the case and, along the way, falls in love and saves the show—it’s just like those Mickey Rooney/Judy Garland movies, and it works just like they all did. The songs by John Kander are delicious musically and the lyrics are among the most satirical and sexy as any Fred Ebb ever wrote—they include major takes on the roles of theater critics, the nature of show-business folk, the ways in which songs get written, and what the “business” in show business actually means. There are also lush ballads, silly production numbers and absolutely nutty chorus songs.

This is the first time the show has been performed at the Mac-Haydn Theatre in Chatham, New York, and they have done a splendid job putting it on their theater-in-the-round stage. Staged by Courtney Laine Self making her debut here, the show has a complicated look with wonderful dances and an impossible-to-ignore book as relationships come and go and romance fills the bloody, dusty air.

The show has three major stories to tell. One is the very important romance between the composer and lyricist, played here by Steve Hassmer and Leigh Martha Klinger. Hassmer is just perfect for his composer role, moving us with his ballad “I Miss the Music.” Klinger is a delight as the lyricist who also becomes the leading lady of the play within the play. Both sing beautifully and act their roles to perfection.

Monica Wemitt is the lady producer (set in 1959, this could have been real, but Carmen Bernstein is a unique character). Wemitt is singing so lyrically and beautifully in this show that she is a perfect example of a musical comedy star like the one her character would like to have in her show. Carmen’s push for a hit is the second story that concerns us.

The third story is the romance between Lt. Cioffi (played by Colin Pritchard) and the show’s ingenue, Niki Harris (enlivened by Rachel Pantazis). This romance is never straighforward as Niki becomes a suspect in the three murders that happen during the show. Pritchard is an excellent Cioffi, stiff but melting in this atmosphere he adores—one of his best roles, I think, and certainly an audience-pleaser. Pantazis is lovely, tall and graceful with a marvelous voice. Even her “innocence” strikes a fine chord with the audience. She is a new discovery for me and a welcome one in every way.

The show requires a large cast and so there are many characters to note in this production. Chorus girl Bambi is played remarkably by Chelsea Lynne Myers. Dakota Dutcher is just fine as stage manager Johnny. Movie star Jessica Cranshaw is delivered to the stage with humor and finesse by Erin Spears Ledford. Music director Bruce DeLaCruz plays the show’s conductor, Sasha Iljinsky; and Bobby Pepper, leading man, is played with humor and panache by Jonah Hale. Good work is brought to the stage by George Phelps, Nick Miller and Todd Fenstermaker. In fact every performer in every role in this show was just about as good and as right as could be.

Once again at this theater, Gabe Belyeu’s character, Christopher Belling, is a standout. As the quasi-British stage director, Belyeu pulls out all the stops and delivers a unique performance that will not be easily forgotten. From his bouffant hair to his high-booted walk, the actor commands the stage with satire, parody, light humor and serious work as the man in control who cannot control anything. Every time he speaks, the show rests on him as the central figure, but as soon as he finishes his line, the center of attention reverts to whatever character Belyeu is playing opposite.

It would seem that every element of this show was held together by the clear-eyed and very talented Ms. Self. If I had the time to do it, I’d see this all over again, from the very beginning to the inevitable end—I liked it that much.

Curtains plays at the Mac-Haydn Theatre, 1925 Route 203, Chatham, New York, through Sunday, June 16. For information and tickets, see the Berkshire Edge calendar, call the box office at (518) 392-9292 or go online to www.machaydntheatre.org.