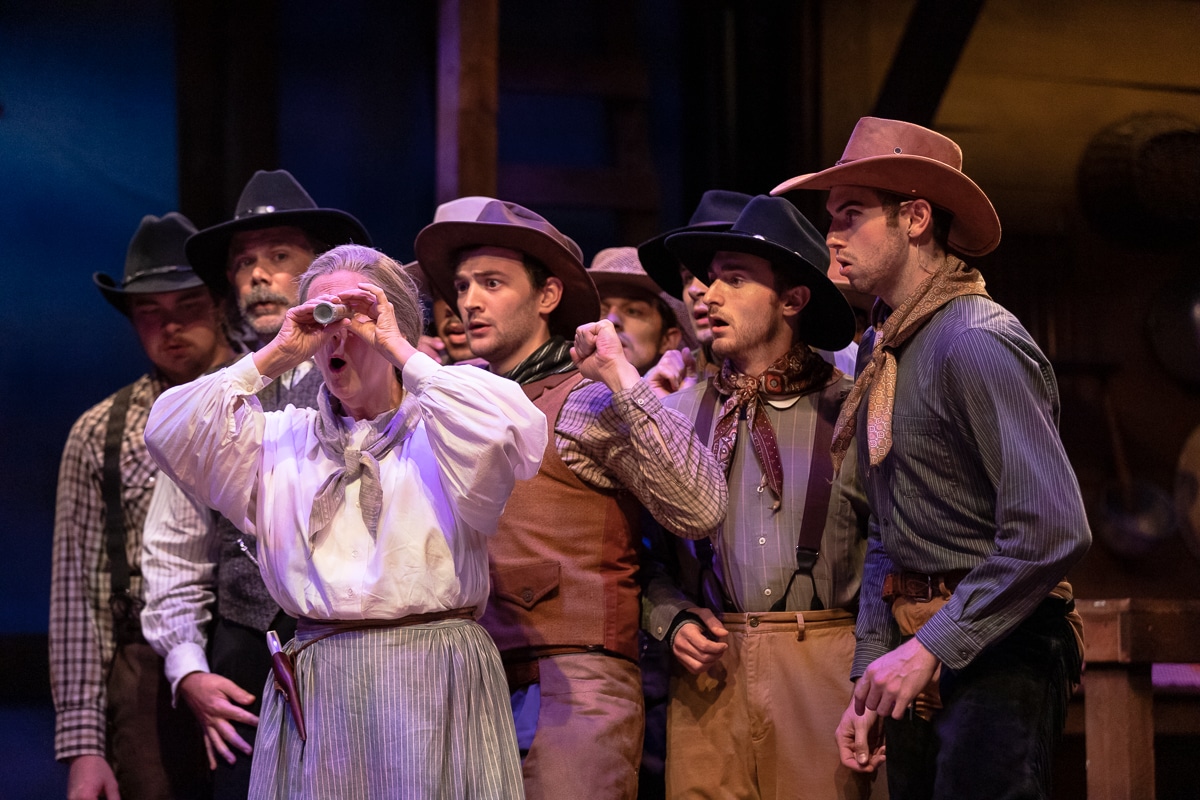 People think of Rodgers and Hammerstein as the authors of lovely, lyrical musicals, and they are. However, generally speaking, they are a whole lot more that just that. In “Carousel,” for example, the heroine marries a low-life abuser who mistreats her from the beginning, costing her both her income and her reputation. In “Flower Drum Song,” the American heroine lives with a man who could easily pimp her out and the Chinese heroine is ready to enter into an uncomfortable marriage with a man who does not love her. In “Allegro,” a woman with unbridled ambition cripples her husband for her own social gain. And so it goes. “Oklahoma!”, their first show, is about more than a cowboy who loves a farmer’s daughter, and another farmer’s daughter who loves anyone who comes her way. It is about sexual violence; it is about gender dominance issues; it is about how lust and passion control a man with few options and how a woman’s charity can be mistaken for acquiescence to a killer. The show marks the end of musical comedy and the true beginning of musical reality, a movement often seen as starting with “West Side Story.” Nope, it was “Oklahoma!”, hence the exclamation point.

Based on the folk play “Green Grow the Lilacs,” this musical was created during the darkest days of World War II and was meant to bring some lightweight joy into the lives of American soldiers overseas as well as to their families, particularly their mothers, who dreaded their untimely deaths due to battle. The authors set out to write a forthright show with romance at the helm and no unfortunate death threats or major upsets. Therefore, Ado Annie was to be a flirt who baked great pies and who kissed everyone around who made a movement in the direction of a bed or a hayloft. “The Farmers and the Cowmen” should be friends. Home-churned butter was to be anticipated and shared. The cornstalks, “high as a elephant’s eye,” were to be enjoyed as much as the corn that populates the lyrics to the songs. Maybe it was in the writing, perhaps it was in the producing, but the final result was a harbinger of the darkness in men’s souls that produces big wars and small personal battles that, speaking of both aspects, cannot be won. It was wartime and we were now in it. The show’s final moments left audiences high enough to sing the songs and forget the plot in the light of the darker international events taking place every day. That optimistic view of the show has persisted to this day, but this production, concluding the Mac-Haydn Theatre’s current season, has brought back the darkness that makes the show so distinctive.

“Oklahoma!” will leave you singing, but even its brightest tunes may take on some of their original sense of intimidation as you sing them in the car going home. “People Will Say We’re In Love” is a pessimistic view of a relationship that skids along in interpersonal spurts. “I Cain’t Say No” becomes a song about compulsive behavior that would keep a psychiatrist busy for years. “The Surrey with the Fringe on Top” grabs its hearer by the psychological throat and inflicts damage, demanding a choice that the girl in the picture cannot make due to an earlier promise. Without the context they are all lovely songs, but the play, happily on stage in Chatham, New York, provides real reasons to wonder about their popularity. This is the best edition I’ve seen of this early example of musical realism, and its style and delivery is a wonder after all this time. Why haven’t more companies given us the model of the modern musical? Because they haven’t had John Saunders at the helm.

The heroine, Laurey, is an innocent who has taken charge of the family farm with the gentle overview of her Aunt Ella. Aunt “Eller” is played in this production by Cathy Lee-Visscher. It is probably the finest performance I have ever seen from this actress. She is strong, specific, musical and dramatic; sweetly comic when necessary; and direct with her advice or admonition when needed. When she disapproves of something her niece does or says, you know it, but family is family and that tie is indisputable, so when Laurey needs her, “Eller” is on her side, at her side, instantly.

Laurey is the sensible girl she believes herself to be, but she still has heart and she can be swayed and dismayed and even obeyed when she makes the right call or decision. Meredith Lustig gets into those mood changes perfectly and her performance is as dramatically correct as the notes she sings in her songs. She is lovely to look at, delicious to hear and when she starts to resolve her own issues about love, Lustig’s Laurey is divine, her teasing is sensible and her fears are palpable. She is the best Laurey I’ve seen since Barbara Cook years ago at the City Center revival in New York.

Her light comedy counterpart, Ado Annie, is played by Rachel Pantazis, who kicks up a sandstorm of love on condition. She is humorous and odd at the same time. Her affair with the peddler Ali Hakim (an all-too-young William Taitel) is a mutual tease and when he winds up with Gertie (Jesse Lynn Harte), a very wrong woman, in his be, Pantazis’ reactions are as funny as her spoken lines.

As Annie’s real boyfriend, up-and-coming young star at the Mac-Haydn Andrew Burton Kelley proves himself again to be a fine dancer and acrobat, a convincing actor and singer, and a charmer to boot. This combination of players is a truly excellent pairing.

James Benjamin Rodgers is a superb Curly: dynamic in the dramatic scenes, chilling in the fight scenes, romantic in the love scenes and the not-quite love scenes, and sweet in the charming scenes with Aunt Eller. His voice doesn’t carry the weight of an Alfred Drake (who originated the role in 1943), but it is lyrical and strong with clear diction and makes a strong impression with every song he sings. He opens the show with the basic theme song “Oh, What a Beautiful Mornin’” and he closes it with a reprise of “People Will Say We’re in Love” that can break your heart. He has a brilliant physicality that is a human expression of strength coupled with a sudden tenderness that cannot fail to charm someone.

The principal smaller roles are all well-cast and played with Gabe Belyeu as sensible Ike Skidmore, Dan Wyatt as Ado Annie’s father Andrew Carnes, and Nick Miller as Jess Chalmers.

The ensemble is perfection, singing well and dancing to the excellent choreography of Katie Johannigman. In addition to the dances in the show, she has replicated — to the plot points — the exciting choreography of Laurey’s Dream Ballet by Agnes de Mille. (de Mille’s work here was surpassed in the same year by her two ballets in Kurt Weill’s “One Touch of Venus.”) Johannigman handles the large company on the round stage at the Mac-Haydn with a touch of expertise and though there were a few moments when the principals disappeared in the crowd from where I was seated, for the most part, each performer got their due and the work was wonderful as the players came and went throughout the work. This was especially true in the second act opener at the box social, “The Farmer and the Cowman.”

The villain of the play is Jud Fry, played by Rob Brinkmann, who is almost as attractive as James Benjamin Rodgers, making him the most desirable Jud I have ever seen. I like it when actors can do the confusing thing. We can hear and see in Brinkmann’s performance the disagreeable character of Jud, but when that is contrasted with his outright sexiness and his attractive, if shabby, appearance, it is clear the Laurey is not just using him to make Curly jealous; there is a genuine threat to the man she taunts with her charms. Ultimately these techniques of hers have a worse effect on Jud. Brinkmann plays to that objective admirably and though we cannot like Jud, this actor shows us his possibilities while showing us his impossibilities. When he is taunted into considering suicide to gain respect, it is an emotional turning point in the show. His solo, “Lonely Room,” was beautifully performed, making it possible to almost admire Jud. That’s an achievement.

John Saunders has done wonders with this near chestnut of a show. He has restored the drama and killed the imposed lightness. He has taken a fresh look at a revered classic and given it back the class that made it the biggest hit of the 1940s (it’s not just the solo offstage opening number as is often stated). His design team has done some stunning work: fine costumes by Bethany Marx, a complex set design by Kevin Gleason, superb lighting by Andrew Gmoser, and the best sound design of the year by Nathan Schilz.

If you love “Oklahoma!”, go warned. If, like me, you’ve had enough of this show, go prepared to be stunned into applause by this stellar production. There is true genius, outside of and beyond the team of Rodgers and Hammerstein, on the theater-in-the round stage in Chatham, New York.

Oklahoma! plays at the Mac-Haydn Theatre, 1925 Route 203, Chatham, New York, through Sunday, Sept. 1. For information and tickets, see the Berkshire Edge calendar, call the box office at (518) 392-9292 or go to machaydntheatre.org.