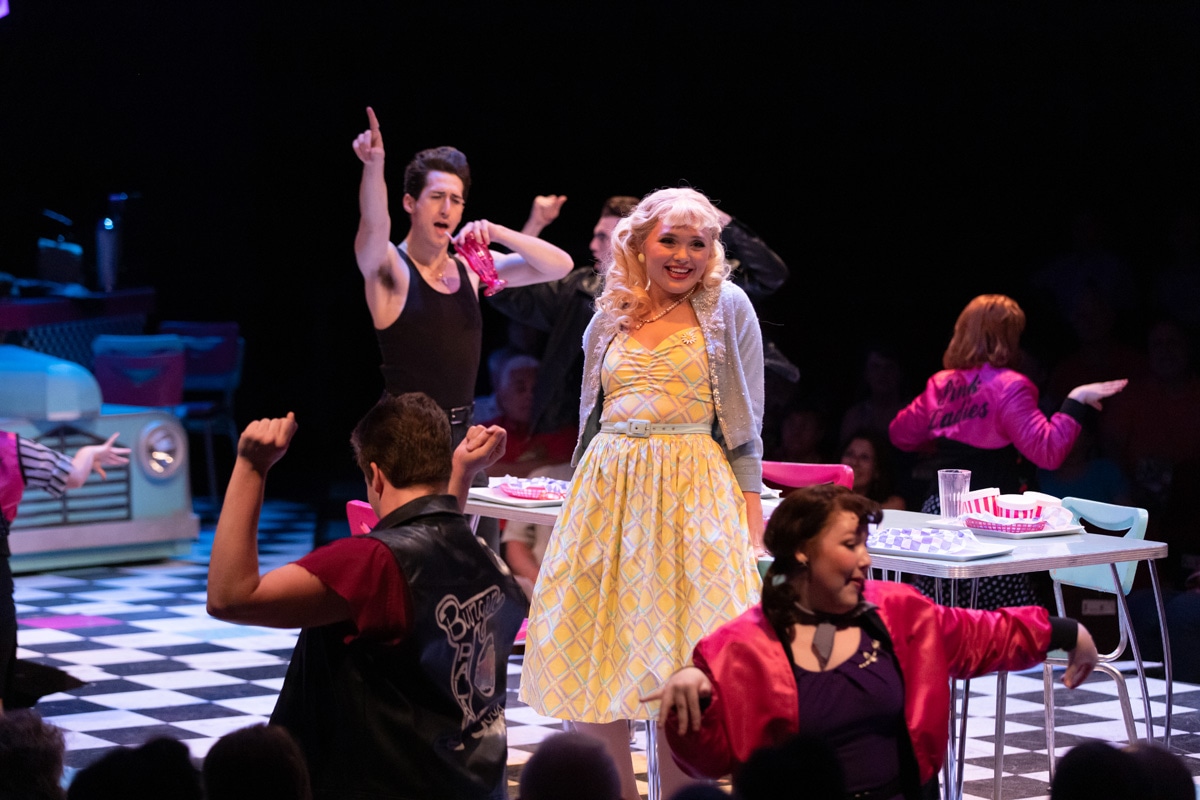 Anthony DaSilva as Danny, Emma Flynn as Sandy, and ensemble in the Mac-Haydn Theatre production of 'Grease.' Photo: Ann Kielbasa

When the Pink Ladies come your way, either duck, make way or seduce them. Those are your only choices, especially right now at the Mac-Haydn Theatre, where they are out to rule the day—and the nights—especially when its boyfriend time. Those tough girls dominate the world of “Grease” both on and off the stage. And everyone else is just putty in their hot hands. This is the toughest “gang” musical since “West Side Story” and a lot more fun, especially under the direction of Sebastiani Romagnolo, who has the girls and almost everyone else in the company dancing 83 percent of the time. By the end of the first act, you wonder how they can possibly go on—but they do.

Another “Romeo and Juliet” retake, “Grease” is a classic American showpiece about the all-American topic of teenage lust. It is a funny show with a heart-tug or two: one major character thinks she’s pregnant, one believes in virginity first, one lives with the conflict of personal identity and yet another is obsessed with his jalopy. They are the quintessential American teens of the late 1950s, their genes and their feet ruled by rock ‘n’ roll, their minds centered on sex (drugs were still to come in this world, just a few years later), and their hearts dangled on strings or kept buried in leather jackets. It is pre-Beatles, post-Glenn Miller, though the basic dance step is still the box and the Lindy is at the base of even the most rigorous hand jive. “Grease” takes us back to a time when even innocence had an edge to it, and the show of that name explores it all in just over two hours, including the bows.

The cast on the Chatham, New York, stage looks just about right age-, type- and size-wise. The 18 or so players could not have been better-chosen for this production and it is their youth and—God knows—their energy that keeps the show so vivaciously vital. The show does not have a Rodgers-and-Hammerstein-type score; it is grounded in the pop music of its target period. The songs deliver as they need and even the heavier plot pieces—”Summer Nights” “Beauty School Dropout” and “There are Worse Things I Could Do”—are standouts as delivered by these young company members. But it is the big dance numbers that hit the high spots as a dozen or more kids dance as though the world might be coming to an end at any moment.

The man at the center of the play is Danny Zuko, played here by Anthony DaSilva. This slender, muscular male is not quite the animal we’ve seen in past productions, but he delivers in the sensuality department, and in the singing and the dancing, as well. It is easy in his performance to see why so many young women find him attractive and would “give out” just to hold him close. It’s an excellent performance. As his former girlfriend, the leader of the Pink Ladies, Betty Rizzo, Angie Colonna delivers on every level. When she mocks the heroine, it is with honest disdain. When she communicates her odd personal fears, it is with genuine angst. In the course of the show, it becomes clear why the tougher guys want to get close to her and why Danny has moved on. The third corner of this romance-triangle is Sandy Dumbrowski, played with delicacy and sweetness by Emma Flynn, a pretty blonde lass with avoirdupois to boot. This girl has a voice and a way of communicating Sandy’s inner feelings with a look or a gesture that marks her as a definite winner in the character sweepstakes in this show. Flynn gave a whirlwind performance even though her character is one I actually despise.

She’s the odds-on winner in the competition for Danny, but still, in order to get him and hold him, Sandy must sacrifice her beliefs, her morals and her judgment just to get the boy and hold his interest. She is certainly not a role model for today’s youth: She’s no Nellie Forbush from “South Pacific,” who unlearns her racial prejudices; no Anna Leonowens in “King and I,” who resolves to understand a different culture in order to educate others on the subject. Sandy turns out to be just another horny teenager who changes her attitudes to get a boy to like her. What a pity. This show could have gone in other directions and made a much more positive statement about young women taking command in a cleaner way. Oh, well: It’s the ‘50s—who knew what was coming?

Equally memorable were Justin Forward as Teen Angel, Madi Cupp-Enyard as Cha-Cha DiGregorio, Maya Cuevas as Frenchy, Chelsea Lynne Myers as Patty Simcox, Joe Hornberger as Roger, Jonah Hale as Kenickie and Liz Garland as Miss Lynch. In fact, there wasn’t a missed character in this large company—everyone was at his or her best.

Production values ran high and the band was terrific. Even so, it is the work done by the director/choreographer that stands out and ranks high. Romagnolo has surpassed himself with this show and the result is so entertaining that if the show had no story, no plot and no songs, it would still be devastating to watch. The phrase “more talent in his little finger” takes on new meaning with this staging of this show. Bravo, Bravo, Bravo!

Grease plays at the Mac-Haydn Theatre, 1925 Route 203, Chatham, New York, through Sunday, July 21. Catch it! For tickets or more information, see the Berkshire Edge calendar, call the box office at (518) 392-9292 or go to machaydntheatre.org.