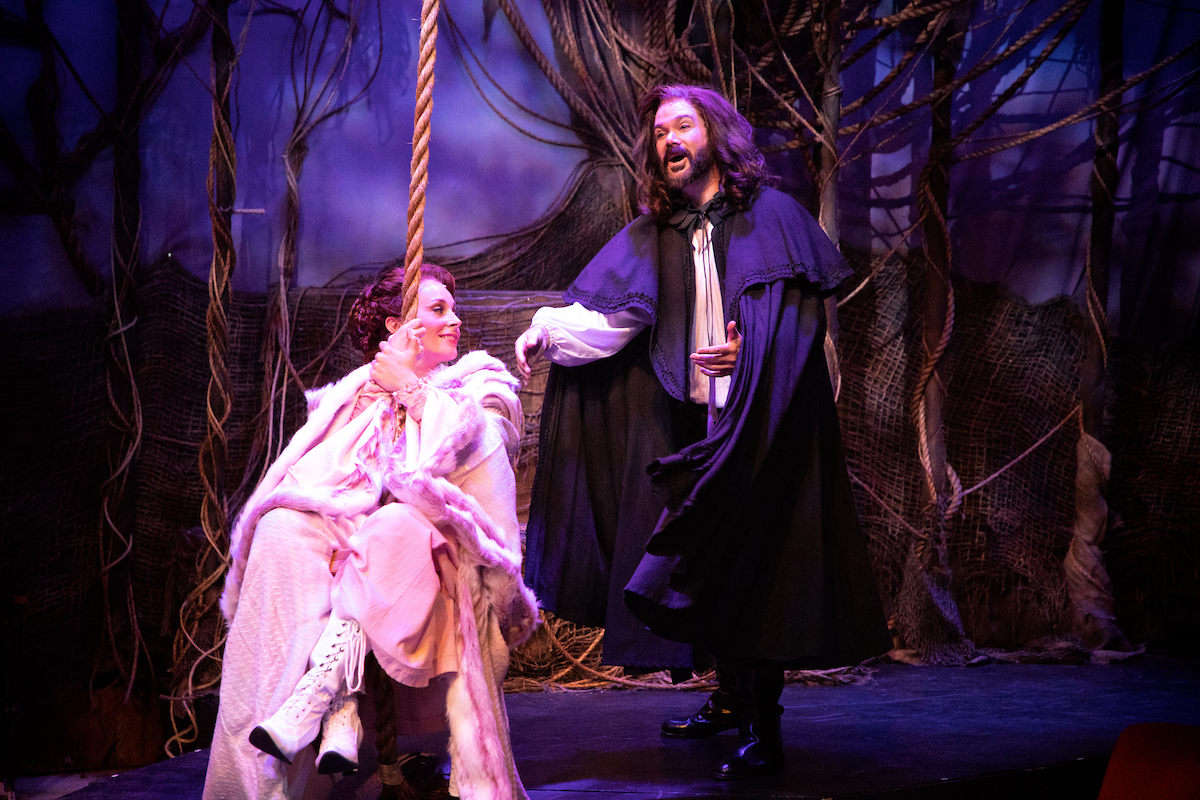 Madison Stratton as Guenevere and Gabe Belyeu as King Arthur in the Mac-Haydn Theatre production of 'Camelot.' Photo: Sarah Kozma

“Oh, the insensitivity of sensitive men.”

Are you missing “Game of Thrones?” There is a solution for that. Go to Chatham, New York, buy a ticket at the Mac-Haydn Theatre for “Camelot” and indulge those long-haired, armor-driven fantasies with one of the great musical theater scores thrown in for the heck of it. The theater company’s opening show for the 2019 season is a thriller—just seeing 29 people in large costumes on the postage-stamp circular stage might take your breath away. Then, when they dance and sing and throw one another around, its as though 50 people were up there in front of you doing remarkable things, all at the same time.

The story of King Arthur, his wife, Guenevere, and their mutual love, Lancelot du Lac, is a classic. At the Mac, it takes on more mythic tones and magical ones, as well. Gabe Belyeu may not have been born to play Arthur, but this excellent actor—a favorite of mine, actually—steps into this king’s shoes and inhabits the role so successfully that it could become difficult to think of him in any other role.

Stratton is a beautiful woman, a gorgeous singer and a splendid actor. She brings a genuine warmth to the role and as she hesitates in her affections toward both of the men in her life, we witness her emotional turmoil in her face. In her final scene in the show, she is obviously torn among her fates and she chooses the least likely ending for her life; it is heartbreaking. This role was originally created for Julie Andrews, who was magnificent opposite Richard Burton and newcomer Robert Goulet. Stratton brings out things Andrews never divulged.

As her pent-up would-be lover, Lancelot, this company has an interesting choice, one not thoroughly engaging for me—Nick Miller. While his French accent works well, his charm was elusive and his charisma almost nonexistent. Goulet in the original production had more charisma than talent and, as Andrews told me the story, after six months in the run, he came to her dressing room to ask her why none of the company ever socialized with him after the performance. Smiling sweetly, she told him, “No one likes you,” and that was because when he was on stage, no one paid any attention to her or Burton or anyone else. The role of Lancelot almost demands that kind of performance and Miller doesn’t have that.

Others in the company whose work shines mightily are Dakota Dutcher as King Pellinore, Gino Cardoni as Arthur’s illegitimate and mean-spirited son Mordred, Elizabeth D’Aiuto as the seductive Nimue, and Sam Seleznow as Horrid the Sheepdog. Spencer Petro as Tom of Warwick also impressed.

James Benjamin Rodgers has created a world of his own imagination out of the elements provided by the authors. His work is stylized and precise and leaves glorious room for the choreography of Lizzie McGuire. The extraordinary environmental set by Kevin Gleason is enhanced by Alison Zador’s wonderful costumes. Andrew Gmoser lights the show with subtle changes and ideal moods. Matthew Oliver’s hair and makeup provide all of those fantastical television images. Put all of this together and you have a two-hour-and-48-minute show that is truly worth every minute.

Camelot plays at the Mac-Haydn Theatre, 1925 Route 203, Chatham, New York, through Sunday, June 2. For information and tickets, see the Berkshire Edge calendar, go to www.machaydntheatre.org or call the box office at (518) 392-9292.