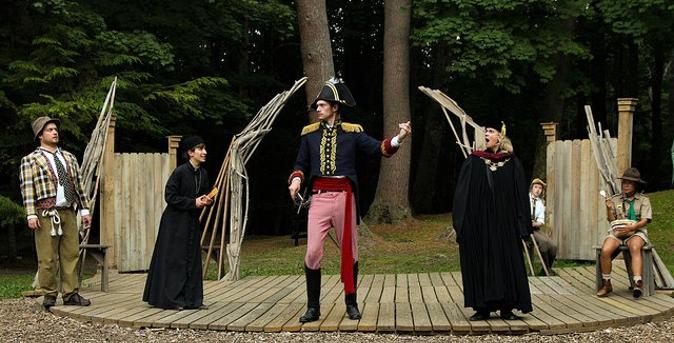 “Thou being a goddess, I have not foreswore!”

Four men swear to leave all worldly affairs out of their lives for a period of three years; to study in seclusion; see no women; enjoy no pleasures; and to become better, wiser men in the process. Then women appear on the scene and the men fall all over one another in an attempt to get close to the ones that touch their hearts and … other body parts. One solution to the problem: Declare the women to be goddesses; after all, they have not sworn to give up goddesses.

Basically this is the premise of Shakespeare’s only comedy with a sad ending. Therein lies a lesson to be learned, all men who read this: Never swear to what you cannot live up to. You may only have a few days to celebrate the possibilities that may, I say “may,” come to you in a year’s time if you’re lucky.

Shakespeare & Company is presenting this outrageous, hilarious play in the Dell at the Mount in Lenox this summer and the company of players is literally cutting the grass with this one. It is a howler, a hoot, a fun-filled romp. Directed for every comic possibility by Kelly Galvin, the young company takes immense pleasure out of teasing the audience, testing one another’s mettle, using slapstick techniques with ardor, and rollicking, roistering, rebounding and resorting to every comic trick in the book.

Ferdinand, the King of Navarre, is played with boisterous charm by Rylan Morsbach, Longaville, one of his Lords, is played with gender-bending wit by Madeleine Maggio; another Lord, Dumaine, is tackled by Devante Owens; and the romantic Berowne is portrayed by David Bertoldi. Singly, they are each one fabulous, but, together, they jump from simply fab to absolutely amazing. They are agile, athletic, and romantic lads who seem to have more energy than any collection of energy bars. When they don’t make you laugh, they touch your heart. If the Marx Brothers were alive, they could take lessons here in close-quarter mania and being masterful Muscovites.

They are rivaled by Rory Hammond as the Princess of France and her ladies Maria, played by Emily Eldridge-Ingram; Rosaline, assayed by the divine Caroline Calkins; and Katharine, brought to life by Dara Silverman. Calkins gives to Rosaline all the femininity that Shakespeare’s lads could portray in their youth. She is seductive and serene. Silverman and Eldridge-Ingram are ideal baiters, their hooks prepared to snag the men they pursue. The regal force of Hammond’s princess is filled with self-deprecating humor until fate turns her into a sympathetic woman whose life is changed by a sudden death in the family.

The foursome deal mightily with all vicissitudes. They not only fish for men, they hunt, they dance, they play masquerades to entrap their men. They alter the cerebral aspects of their characters into the more physical stylings of burlesque. And they play it all with great tongue-in-cheek attitudes that are generously humorous.

As in most Shakespeare & Company productions, actors double in other roles, often playing cross-gender parts. In this play, Maggio also plays a woman, the country lass Jaquenetta, loved by many men including the visiting Spanish Duke Don Adriano de Armado, a role taken to new comic heights by Thomas Reynolds. Silverman plays Sir Nathaniel, a curate and aide to Holofernes, a schoolmaster played by Lori Evans. Eldridge-Ingram doubles as a constable named Dull.

A comic figure of a man, one who is forced to do others’ bidding more than he can do his own, is Costard, played by Luke Haskell in his third outing in these Dell performances. Haskell features heavily in the sword fights, the chases, the more manic moments of the play. He and Reynolds fight the funniest of duels, in part over his own love for Jaquenetta.

As in so many of Shakespeare’s plays, there is a secondary play within this play, a presentation of heroes of old. Evans shines in this aspect of the play, as do many of the others. In short, this is a fun 90-minute romp through semi-obscure Shakespeare (my first time seeing this play, actually).

The eclectic costumes by Elizabeth Magas work wonderfully for these characters, some of whom seem to come from the 1950s while others are clearly from the 1650s. The two songs that end the play were composed by Deborah Morris, and the settings are delightful ones. In short, this is a great way to spend the hours before sunset on a lovely summer afternoon.

Love’s Labor’s Lost plays in the Dell at the Mount, 2 Plunkett St., in Lenox, Massachusetts, through Saturday, Aug. 18. For information and tickets, see the Berkshire Edge calendar, go to shakespeare.org or call the box office at (413) 637-3353.