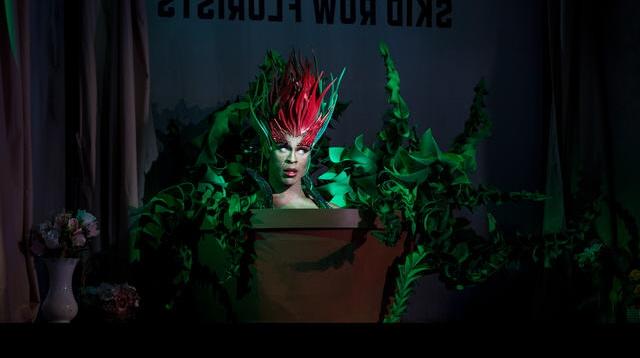 “I get off on the pain I inflict.”

Mothers, beware: after seeing this show, you may never get your kids to the dentist again. Audrey, the floral assistant, is dating a dentist, Orin Scrivello, D.D.S., and he mistreats her terribly, abuses her, and makes her furious with herself for accepting all he can make her do. But, like the best of heroines in the best of musicals, she loves him, can’t live without him: “Why was I born?” Audrey, in turn, is loved and idealized by Seymour Krelbourn, the nebbish who sleeps under the counter in the floral shop and who wouldn’t hurt even a tiny fly, or a tinier flea. They both work for Mr. Mushnik in his Skid Row shop where customers are never an issue.

Being on Skid Row leaves a lot of room for wastrels, bums, druggies, and urchins. Instead of a traditional chorus, this show has a trio of those urchins who sing songs, sing commentary, sing illusions. Add in a small rock band and a mythic plant (it takes two people to create the plant; hell, it took two people to create you and me, also) and you have the people in this production “Little Shop of Horrors.”

This is probably the 13th production of this show I’ve seen, including the original version produced off-Broadway in 1982. Not the usual number 13, this one is a lucky numbered-piece as the show has been revitalized and reconceived in ways I’d never imagined. The end result is a fresh and refreshing look at this small charmer. Berkshire Theatre Group has placed it inside the beautiful and elegant Colonial Theatre on South Street in Pittsfield and treated it like a production of “Carousel” with its band in the orchestra pit and an expensive production designed by top talent: David Murin doing costumes, Reid Thompson doing sets, Oliver Wason doing lights, Mio Guberinic designing Audrey II, and Rick Bertone conducting the band.

The cast is wonderful. Seymour is played with compassion and humor by Stanley Bahorek. Lindsay Nicole Chambers plays a beautifully sensitive Audrey. Stephen DeRosa makes a much misled Mushnik and James Ludwig brings to Orin a serious gentleness which is put aside instantly in the privacy of his dentistry office. He also plays a city full of other people, as well, including Clare Boothe Luce. Alia Hodge, Kay Trinidad, and Jalise Wilson are the Urchins Chiffon, Ronnette, and Crystal and they are just about the best girl group to ever grace this stage.

This company of players pushes, pulls, and procreates the story, birthing it anew on the Pittsfield stage. Even with two fine productions behind me in the past year, this felt new and immediate and important in its odd way. Part of that is due to the Audrey II, the plant.

Thanks to the inventive and talented work of director Ethan Heard and his choreographer Parker Esse, the principal alteration in this show is the plant, Audrey II. Traditionally a puppet voiced by a black bass-baritone, in this current edition, the voice is provided by a black alto named Bryonha Parham who gives a grandly sinister sound to the ever-growing and somewhat massive green plant from outer space. Physically Audrey is played by Taurean Everett and this Audrey is a sight to behold. In fact, she’s a bizarrely attractive creature whose undulations and visual transformations are truly mesmerizing. It is a wonder indeed that Seymour can do anything but obey the willful demands of his beautiful baby.

It is this one element, so very altered from the ordinary, which gives this production an importance that I never imagined possible. This production, like Audrey II herself, demands to be seen and enjoyed and, if you find yourself falling into its spell-binding clutches and needing to spend more time, you had better buy another ticket during intermission or you might not be able to repeat your experience, something I wouldn’t mind doing myself.

Little Shop of Horrors plays at the Colonial Theatre, 111 South St., Pittsfield, MA through Saturday, July 23. For information and tickets, see the Berkshire Edge calendar, call the box office at (413) 997-4444, or go online to www.berkshiretheatregroup.org.