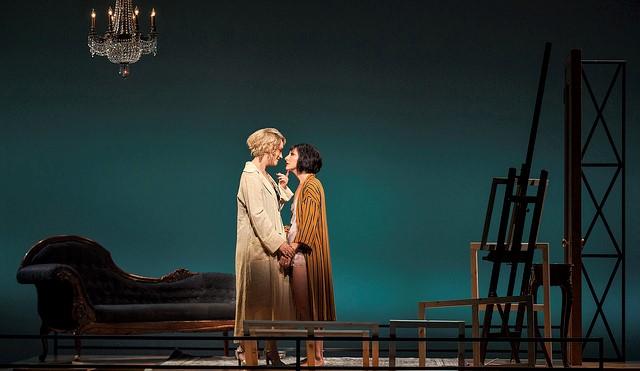 I must confess that I have been waiting a long time for this world premiere musical. I had seen several paintings by Tamara de Lempicka many years ago and the Art Deco style attracted me very much. Art Deco is a classical, symmetrical, rectilinear style that reached its high point between 1925 and 1938. Drawn from Cubism, Futurism and Bauhaus styles was, in Paris, the dominant art form of the period. She herself was fascinating and, a few years ago, a novel about Lemipicka attracted my attention with the use of one of her finest paintings on the cover. Ellis Avery’s novel explored the artist’s relationship with one of her models, La Bella Rafaela, about whom little is known except that she posed for several of Lempicka’s finest works, including the definitive nude portrait of a woman in that period of time, and that she married a neighbor of Lempicka’s who used to watch the two women through his apartment window.

So I was very curious about this new musical being presented by the Williamstown Theatre Festival, written by Carson Kreitzer and Matt Gould. They have pursued the lesbian relationship between Tamara and Rafaela as the center of their play and have been explicit in that exploration. Considering Tamara’s three marriages and her famous friendships with Nancy Cunard, Violet Trefusis, Vita Sackville-West, Colette and the infamous nightclub performer Suzy Solidor, Tamara de Lempicka’s bisexuality seems pretty much a closed concept. She loved men and women alike.

The musical takes her from her first marriage in 1916 through the war years and beyond in America. The periods through which she made her mark are indicated in the lush and exquisite costumes designed by Montana Levi Blanco. With very limited exceptions, however, Lempicka’s own costumes tend to remain the same, her hemline varying very little, her look enhanced primarily by coats. It is the surround that gives us her place in time, not her own look. Her hair never seems to vary, either, remaining the style of her wedding day. It is odd that she never changes, and perhaps it is a directorial statement by Rachel Chavkin, that nothing could alter the basic woman. I don’t know.

With the exception of one song performed by a representation of Josephine Baker, another notorious bisexual woman of the time (not identified in the cast list, but sung, I believe, by Grace Porter), the score is principally a constant thrumming, thrusting, beat-driven, unmemorable collection of musical moments in which the same lyrics are repeated and repeated rather than developed. There is a sexual excitement in the score, but not much relevance and nothing much that delineates any connection or representation of the World War I years, the Roaring 20s, the heartsick 1930s or the big-band 40s. There are no ballads in Act One, and a few more acceptable songs in that vein in the second act. While the score has excitement, it has no true melodic connection with the ear, mind or heart of the listener.

The singing, however, is robust and strong and representative of so much talent assembled on the Williamstown stage. The young Lempicka (we meet her on her wedding day to Count Tadeusz Lempicki, a Polish nobleman) and her husband-to-be sing with gusto about the “Happily Ever After” they foresee for themselves, and this is one of the best tunes in the show. It is also where we like Lempicka best, for she is hopeful, youthful, exuberant, dynamic and certain of how things should be. As a character, we slowly begin to dislike her — at least that was how it was for me. Played by Eden Espinosa, a marvelous actress and singer, Tamara (born Maria in Poland) is portrayed as one of the most single-minded women in history, a 20th-century virago whose will cannot be overwhelmed by anyone else’s needs or interests. I truly enjoyed Espinosa’s work in this role. It was very focused and very smart. She possesses a charm that is both disarming and disquieting at the same time. She made the personal aspects of Lempicka very believable.

As her husband, Andrew Samonsky sang beautifully, dressed beautifully, deteriorated psychologically with beauty and moved on as he came into our presence, with grace and beauty. He is a definite asset to this musical and I hope, if the show moves on, that he will stay with it. He was at least someone with whom the audience could identify and sympathize, which is a good thing to have in a musical.

Carmen Cusack plays Rafaela. She is absolutely stunning, worth seeing the show for. Her songs and duets with Espinosa are brilliantly performed and her costumes, particularly a modified female zoot suit, give her a strong bisexual allure. Though seemingly stretched beyond the boundaries of actual time, her looks help move us through the period of their relationship.

One remarkable performance that also brings us the evolution of the drama is delivered by Alexandra Templer as Tamara’s daughter, Kizette. She goes from awkward child to emerging woman with wonderful shifts in her posture, her looks, her deportment. Once again a character in this show gets our sympathy, our empathy. I cannot recall another abused child in a musical (perhaps Oliver Twist) who grows into someone with lovely potential without ever giving up her individuality.

Suzi Solidor is wonderfully played by Natalie Joy Johnson. The Italian artist and revolutionary Marinetti (Filippo Tomasso Marinetti, who wrote the Futurist Manifesto) was delightfully portrayed by Steven Rattazzi. Baron Raoul Kuffner, Lempicka’s patron who later married her, was well played by Nathaniel Stampley and his mistress (misrepresented in the program as The Baroness), the Spanish dancer Nana de Herrera, is deliciously acted and sung by Rachel Tucker.

A young couple not identified specifically in the program — which also does not include a list of the musical numbers — dance erotically as a nude Adam and Eve (based on a Lempicka painting). They are probably Tim Creavin and Grace Porter, but I’m not really sure.

There is so much wonderful material in the life of Lempicka from which to draw a fabulous musical. Unfortunately in this case, this is a loud, brash, fascinating piece that doesn’t truly satisfy. Riccardo Hernandez’ sets work very well on the large open stage in Williamstown. Bradley King’s outrageous lighting design is a show unto itself, and worth the price of a ticket. Charity Wick’s conducting of the nonstop score is perfection for the thrumpty-thrum orchestrations by Cian McCarthy, especially as underscore to the fine choreography by Raja Feather Kelly.

There is a lot of “show” in this production, but I don’t think the score will stand the test of time. It is hard to understand how this could be possible with this subject matter; the talent amassed to perform; and the several years of workshops at Yale Repertory Theatre, the Virginia Repertory Theatre and the NAMT presentation in New York in 2016. The show looks as though millions have been channeled into it and I hope that they can finally pull a great show out of this; it deserves greatness, just as Lempicka’s art deserved greatness.

Lempicka plays on the main stage at the ’62 Center for Theatre and Dance at Williams College, 1000 Main St., Williamstown, Massachusetts, through Wednesday, Aug. 1. For information and tickets, see theBerkshire Edge calendar, go towtfestival.orgor call the box office at (413) 458-3253.