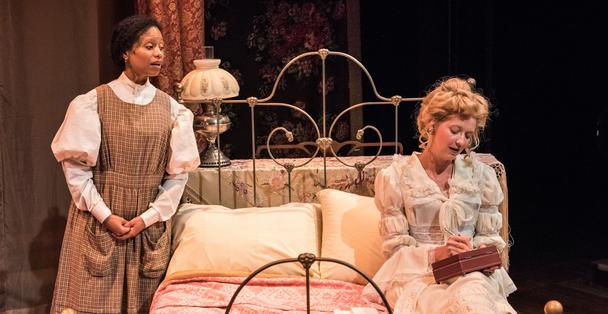 THEATRE REVIEW: ‘Intimate Apparel’ at Shakespeare & Company, a play not to be missed. Two performances added

“What makes us friends. . .I never even came in by the front door.” 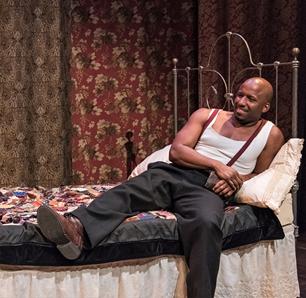 Esther, a young southern woman living in a New York City boarding house in Harlem in 1905, is the creator of intimate apparel for ladies: society ladies and ladies of the night. At 35 she is still a virgin, though she admits to kissing a few men. She is an innocent in a world gone sensual, a lady of a different sort, a pure soul who believes in the inherent goodness of people and, when she herself feels a bit of jealousy, she absents herself from human contact in order to conceal it. She is a woman who does not know herself well, for, though she believes in the beauty of her soul, she cannot see the beauty in her face, her body, her personality. She is not modest nor is she pretending in order to receive compliments; she is an innocent.

When she begins to correspond with a man named George (played by Lee Edward Colston II) working on the Panama Canal, she opens the floodgates of romance. When she marries him on his arrival in New York, she does so believing in his goodness as much as she does her own. What she learns through marriage she cannot translate into the rest of her life, try though she will. In short order her friendships with her clients begin to turn in unexpected ways and, for the first time, she must confront what is actually real and true, not merely what she believes.

Author Lynn Nottage takes Esther on a true journey of the soul in her 2003 play. Nottage is one of those authors whose works win awards all the time and yet we don’t see them often. Therefore, it is surprising to have two opportunities in two years to see this play. It is too strong and specific a play to receive very different interpretations and yet this latest outing at Shakespeare & Company in Lenox, Massachusetts, gives just such an opportunity. Actress Nehassaiu deGannes has the face of a true innocent and her reactions throughout the play are as strong and dramatic as any could be. She brings to Nottage’s character pure humanity in an impure world. It makes for a most amazing character, rendered anonymous in 1905 photographs yet presented in the fullness of creation onstage. 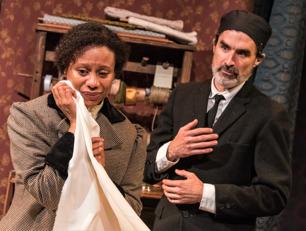 Esther has a second man in her life, an Orthodox Jew, a seller of fine cloth, from whom she purchases materials for her designs. Mr. Marks find himself fascinated, nearly transfixed by Esther and her tranquil, inner beauty. He presents her with rare samples of laces and silks and she accepts the gifts as a tribute to her work, never seeing how she has affected this man as a man. Tommy Schrider is beautifully aware and emotionally fulfilling in this role. His sensitivity matches deGannes’ and their scenes together are curiously moving even when there is nothing transparent going on between them.

Her New York society matron, Mrs. Van Buren, is played by Christianna Nelson, who gives the role more sensuality than anyone else onstage brings to their roles. In peignoir and undergarments, she is a subtle seductress without a man to seduce–the wife of a disinterested man, we eventually learn, a woman with curious propensities. Nelson is lovely in this role, beautiful to behold and to listen to as she rambles through her personal stories. The role suits her talents wonderfully.

At the other end of the spectrum is Esther’s charming landlady who only houses girls and who marries them off rapidly. Esther is her only failure, a 17-year tenant without a man to claim as her own. MaConnia Chesser plays Mrs. Dickson and her scenes with Esther are lovely and show a charming side to a woman who could be mistaken for a brothel madam on the one hand and a den mother on the other. It is a triumphant performance by an actress whose talents allow us to see both sides at the same time. 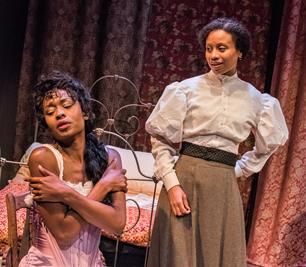 And then there is Esther’s best friend, Mayme the prostitute. Played by Medina Senghore, Mayme is a winner whose love of music actually surpasses her love of her profession. She is excellent at both and she adores her seamstress friend. When circumstances set them against one another, it is most painful to watch Senghore try to maneuver her way through the complications at hand. It is painful indeed to see Esther’s world, already in crisis, crumble away with the loss of Mayme.

So much alters because of George. Colston plays a man whose motives are never clear and yet are indicated in the sidelong glances he permits us. He manages to string us along the way he does Esther. It is excellent work by this actor that we can watch George and not dislike him.

Director Daniela Varon has created a remarkable and fluid production of this play in the open, three-quarter thrust stage at the Bernstein Theatre. A sewing machine and a bed are the central objects in this play and, certainly, it can be said that the play is about these things, centered on them. Utilizing Sandra Goldmark’s set and James W. Bilnoski’s lighting to keep things moving, Varon has turned her actors into landmarks we seek for the next turn in the play. Molly Trainer’s costumes are perfect pieces; in them, the actors are truly in their time and place and our image of all ends of society from the innocent to the rakish are clearly indicated.

I have heard that this production is almost completely sold out in advance, but find a ticket somewhere and see one of the great American playwright’s finest works acted by a company of players who are defining her work for us.

Editor’s note: Due to the popularity of this show, two extra matinee performances have been added on Tuesday, Aug. 8, and Wednesday, Aug. 9. The role of Mayme is now being played by Rachel Christopher.