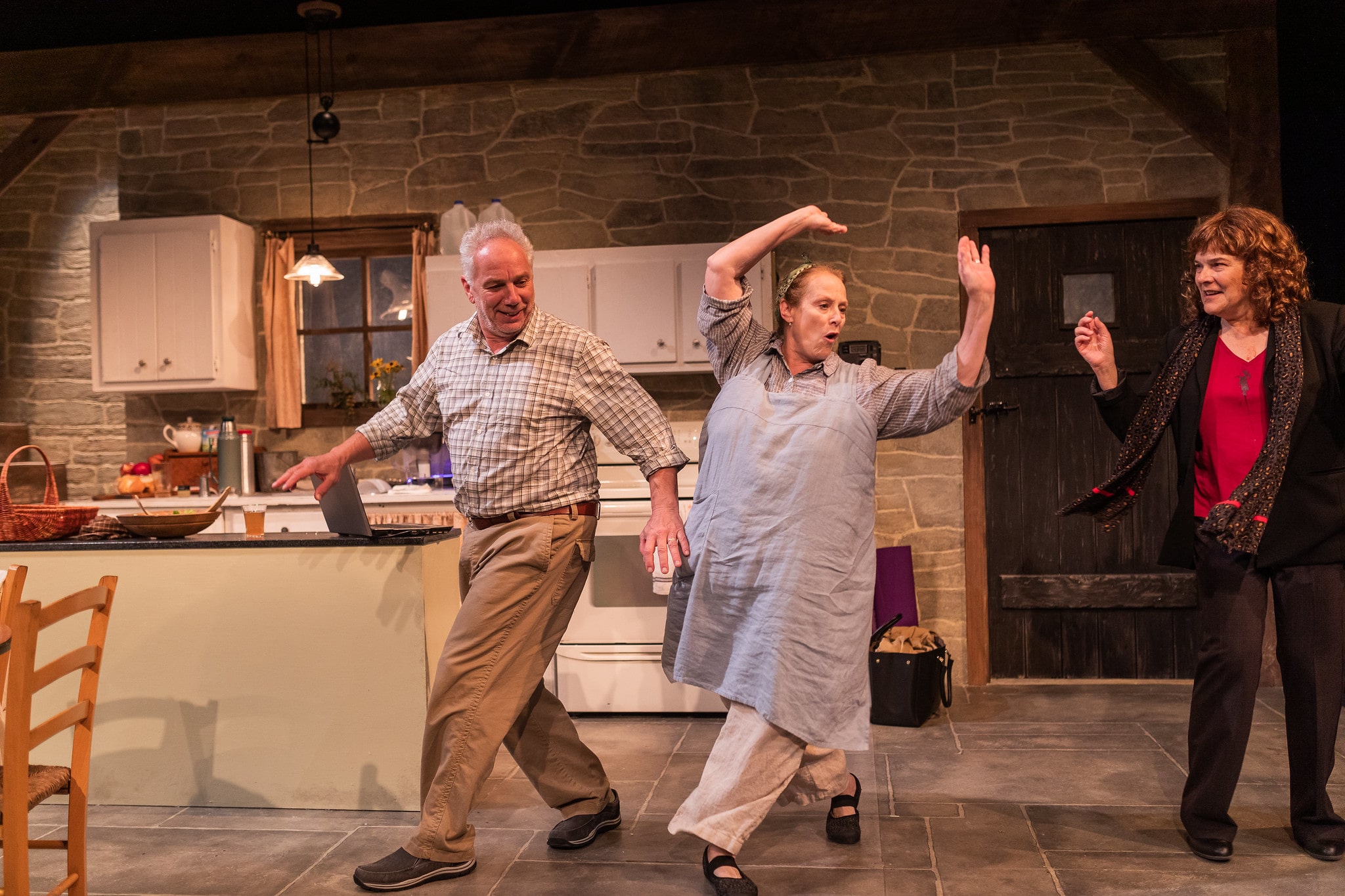 Jonathan Epstein as Robin, Diane Prusha as Hazel and Ariel Bock as Rose in the Shakespeare & Company production of 'The Children.' Photo: Nile Scott Studios

The Children
By Lucy Kirkwood
Directed by James Warwick

“You are past your sell-by date.”

Diane Prusha, Ariel Bock, Jonathan Epstein: three major ingredients for a successful concoction. Add in one terrific play and stir with a director who is incisive and intuitive, and you cannot help but produce a great piece of theater. That, in a nutshell, describes the production of “The Children” by Lucy Kirkwood currently playing in the Elayne P. Bernstein Theatre at Shakespeare & Company. It doesn’t get much better than this.

The play concerns three old friends, two of them married to each other, who come together after long years and play out a guilt trip that none of them is ever comfortable discussing. It is the unanticipated visitor, a typical mystery gambit, who shows up all of a sudden and sparks the play and the dilettante chatter that follows her entrance. Rose (played by Bock), a former scientist/colleague of Hazel (Prusha) and Robin (Epstein), has come for a visit and has a secret purpose. She is after something sinister and secret and it may not be what seems obvious. The play’s comedy emerges from secrets withheld and the ways in which they are hidden from the others. And yes, this is a comedy, a bright spot that conceals a more tragic future for them all. However, it is a play that brings you enough laughs to justify being called a comedy.

Ariel Bock is a delicious element here, one of her best performances in a while. She owns secrets that she will slowly share with the others, but her ultimate secret is one that is never anticipated by anyone. Bock is very convincing in her role as a sort of emissary from their past who can drive them into the uncertainty of a future that will save future generations from being literally burned up before their time. She is strong and even when having fun with her visit, she is clearly holding back, gauging her moment.

Bock appears without regularity in this Lenox company’s offerings, so one forgets how talented she really is in roles such as these. She is wonderful with exaggerated language; she is brilliant with her tasteful looks and glances at her stage partners. Her forte, though, is playing against type.

Rose is a seductress who doesn’t seduce any longer, but that cannot stop her once she gets going. Bock plays this with a knowing look that is devastating. It’s her biggest, longest, sexiest side-glance that literally saves the day here.

Epstein, on the other hand, is an actor who can deceive without half-trying. As Robin, he has been a man with long-kept secrets, mostly from his wife, Hazel. Epstein plays this well even immediately after confiding his secrets to Rose. The cottage he lives in with Hazel, is a cozy little stone hut, but he treats it with a palatial sensibility. Robin is the one who has kept his family intact and content, or so he believes. It is fun to watch Epstein manipulate his wife when it isn’t necessary, though he honestly believes this is true. For all his years with Hazel, he finds he hasn’t really known her at all.

When he and Prusha get going, it is instantly clear that their rhythms do not allow them to relate honestly. Therein lies the amazing truths that Rose brings up in this awkward reunion. Robin takes seriously everything his former mistress brings with her. Epstein knows just how to bring in the tragic elements for his character without ever missing a planned or written laugh line. The nice thing about his work in this play is the comedy/tragedy masks on the unseen fourth wall. They remain unseen but we can feel them leaving post-it notes everywhere, saying “keep it real.” Comedy needs that. Epstein knows it and he uses it perfectly.

Hazel is an old woman with a less-than-subtle lust for life. She feels it and she shows it. In her quirky voice, Prusha manages to give Hazel a sweetness that is tinged with aspects of tragedy. For this role Prusha has chosen a softness that cannot be duplicated in words, but its theatrical effect is the tenderness that clutches us so specifically. In this sort of choice, the actress is perfectly brilliant. She is an ideal retired physicist unable to make a mistake, but suffering secretly from the one she may have made many years before. I loved her work in this role, in this play, and would gladly see it again over and over.

James Warwick has done a splendid job directing this play. It is deceptively simple, but there are so many layers of truth, humor, history and relationships that to dig through the surrounding fields of emotion to find the right spot for each and every one of them must have been a remarkable experience.

His work is echoed in the perfect coastal cottage set by Patrick Brennan, oddly correct costumes designed by Deborah A. Brothers and subtle lighting by James W. Bilnoski that changes as the emotions change. Together with the amazing sound design by Amy Altadonna (wait for the ending), Warwick manages to pull his actors through a world-class disaster—or is it? “If you’re not going to change, don’t live,” says one of the characters, and I say, “echo, echo.” So get ready for a drama leading to tragedy that is as funny as can be and hold on to your seat when the world around your friends (you grow to like these three character and to find a closeness to them all) begins to alter and could move even further toward a nonlistener’s cruel errors.

The Children plays at the Elayne P. Bernstein Theatre on the Shakespeare & Company campus, 70 Kemble St., Lenox, Massachusetts, through Sunday, Aug. 18. For information and tickets, see the Berkshire Edge calendar, call the box office at (413) 637-3353 or go to shakespeare.org.