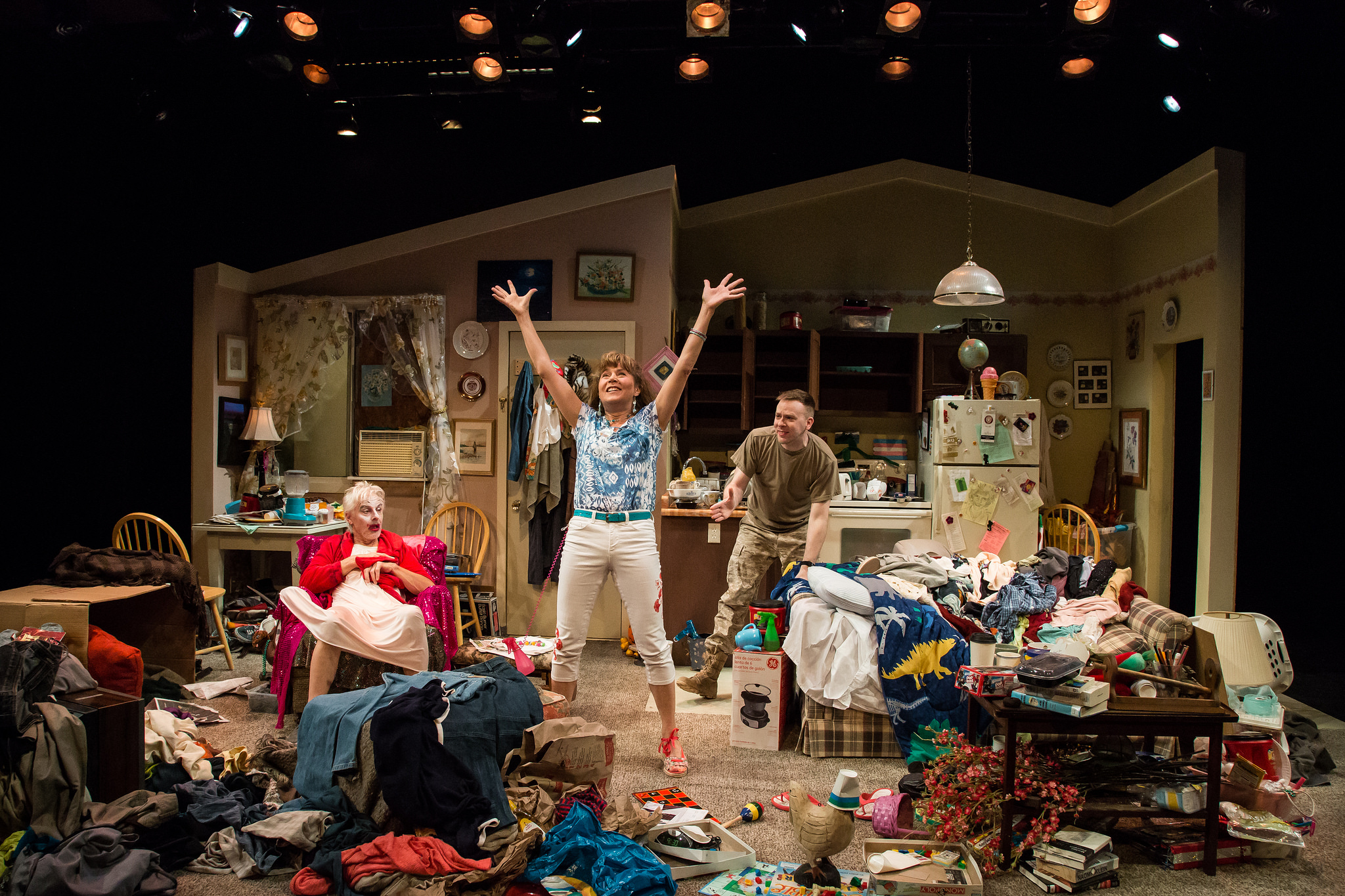 John Hadden as Arnold, Elizabeth Aspenlieder as Paige and Adam Huff as Isaac in the Shakespeare & Company production of 'HIR.' Photo: Emma Rothenberg-Ware

“Everyone is a little bit of everything.”

“HIR” is a play about the ultimate dysfunctional family — a family like mine, or like yours, or like everyone’s — except with a difference: Instead of “father knows best,” this group is better described as “winner takes all,” except there really is no winner — only losers — and not because they all don’t try to win. They all do. It’s just that they share a fate that is inescapable. Max was a girl who wanted to be a boy, but the boy he (or ze, actually) has become wants to be with boys and hasn’t learned yet to be comfortable with hir identity. Paige wants to be the best, most helpful mother possible, but she hasn’t the talent for mothering, only smothering, and she cannot even do that with any real success. Arnold wants to be in control, but he can’t control anything, including his bladder, his temper, his lusts or his leanings. Isaac longs for a family unit to shelter within, but he doesn’t understand when his family isn’t the family he has longed for, even after leaving them because they were just not what he wanted when he had them. The audience is left, at the end of the play’s second act, wanting a third act that rights some of these issues, but there is no third act and so we — the audience — are left as bereft as everyone else in the family. We have joined the incomplete and are, ourselves, not included.

There’s a lesson in all of this: Don’t expect life to be generous. It’s a hard lesson to learn as even the controlling Paige, played by Elizabeth Aspenlieder, discovers. An abused wife, she has revenged herself on her post-stroke husband, her younger “son,” and her discharged-Marine elder son. If revenge has been her goal, she has missed the mark and should put away her bow and arrow. If she has a different goal, she should let it have a shot. But Paige has no goal of her own, really; she has only an inclination to have a goal. Her best bet at getting something back is her transgendered daughter, almost a boy, almost a man. Max and hir decisions are at the center of the drama. Ze is still being led by the nose here, hir mother holding the other end of the leash and the challenge for Jack Doyle, playing Max, is to be very clear about whose goals he lets trend from moment to moment, Max’s or Paige’s.

The give and take on this issue is the driver in the play, but who is in the driver’s seat is very much the crux of the issue. Doyle is dynamic. This Max holds a lot of the cards in this unwinnable game. The difficulty comes when Max has to be Max and not Paige’s Max; then this character becomes frightening for a moment, becomes punishable or pitiable or sympathetic. Doyle’s performance is a wonder as Max shifts before our eyes and ears, taking on all these alterations and more. Max in Doyle’s talented hands is a true trans, not just in gender but in attitude and all that goes with it.

If you come to this play understanding the import and impact of the title, “HIR,” you might think, at the outset, that John Hadden’s Arnold is the transgendered person in the play. Bedecked in a pink nightgown, a wild wig and drag-queen makeup, he is presented as a freakish nightmare of a transgendered person. But that image is quickly lost when his seemingly drugged character is manipulated by the angry wife pretending to care, pretending to care for, or look after, the sick man that Arnold has become. As we learn the true nature of his sickness, of the man himself, Hadden’s “husband” transforms into the bad son who must be punished. It is hard not to keep your eyes riveted to Hadden throughout the first act even when so much more is happening elsewhere on the stage. He inspires disgust, pity, an almost heart-stopping loyalty as he staggers through much of the first half of the play.

When Arnold is finally given an opportunity to return to his best (or actually worst) self, Hadden makes the leap and drops us down the chasm between his real persona and his presented self. It is a long, harsh fall we take as he lets his own truth be seen and not just heard about in his wife’s harangue. Hadden’s brilliance in the part is staggering. Not for an instant does the actor appear on stage. Only the character emerges in his performance, and maintaining the altered state that is Arnold has to be one of this fine actor’s finest achievements.

Adam Huff as Isaac, the failed son, the failed soldier, the failed human who requires the home he left behind, is the most challenged of all. Isaac’s presence destroys Paige’s skilled destruction of her family. It awakens the worst traits of Arnold when prompted. It kills the enthusiasm of Max, who wants to be appreciated but can’t conform to Isaac’s remembered image of the “her” hir once was. Huff does well with the military bluster of the Marine. He handles the emotional struggle of the returning prodigal son with much needed humanity hidden under Isaac’s anger. That humanity peeks through the military buff now and then, and is so very welcome when it appears. Huff’s final moments in the play are among the great strengths of the piece; never has an emotional breakthrough had so much resonance in so short a time.

Complexity of complexes, Paige brings every human emotion alive on the stage she has created as her framework. The home is a total wreck, symbolically expressing the world she inhabits inside her own head and heart. The house, a “starter” home, is nearly finished through the violence that surrounds her and her family. Half disguised as realistic and half trashed through the combination of accident and incident, the place where Paige styles herself as new normal is anything but.

Aspenlieder echoes some of her finest performances on this same stage: Her Joellen in “Paradise Drag” and her Haley Walker in “Bad Dates” vie with her Natasha in “Rough Crossing” and Suzanne in “The Ladies Man” for preeminence. Paige is perhaps the quintessence of Aspenlieder’s interpretive skill for this nonstop talker, this woman of violent action veiled as concern possesses traits of other women we’ve seen before, though is ultimately never quite their equal, never quite their better. Paige is the monster mother brought to that point through personal adversity. She has refashioned herself as the loving mother of a disabled husband although that disability, it is discovered, is mostly her own invention and creation.

Aspenlieder plays the many sides of this woman, contrasting and controlling and coalescing as multiple personalities can do. She delivers her quick lines and her long ones with equal impact. She devastates with an enthusiastic smile and, when she turns strong and dynamic at the point where she is most needed by the neediest of her “sons,” she once again devastates, this time with finality and without finesse. It is quite a performance in a play about performance.

Director Alice Reagan has met the challenges of this script beautifully and she has the right company with whom to tackle the multitude of crises, times of intense difficulty, trouble, or danger, that abound. Her work here outshines her earlier accomplishment with the fine play “Or,” seen on the main stage two years ago. Carolyn Mraz has created the ultimate state of chaos with her excellent set design and Charlotte Palmer-Lane does a wonderful job with the costumes for this show. Deb Sullivan’s lighting design subtly suggests both the atmosphere of the place and the mental atmosphere of the people in it.

This intriguing dramedy will make you laugh, make you shudder, make you tear up a bit. It will open your mind to the intrigues of the day and our socially revolting era. Like me, I think, you will want to know more about this family and what the future holds in store for them. There are so many questions left unanswered and that elusive third act doesn’t exist, I believe. While there are kudos for the company producing, presenting and being presented in it, and a cheer for the author, who uses the gender pronoun “judy,” the play at the end of the day is only there, at the end of a day, and there is so much more to discover. I suppose that’s why God endowed us with imagination: We can take this any way we like.

HIR plays at the Elayne P. Bernstein Theatre on the campus of Shakespeare & Company, 70 Kemble St., Lenox, Massachusetts, through Sunday, Oct. 7. For information and tickets, see the Berkshire Edge calendar, go towww.shakespeare.org or call the box office at (413) 637-3353.