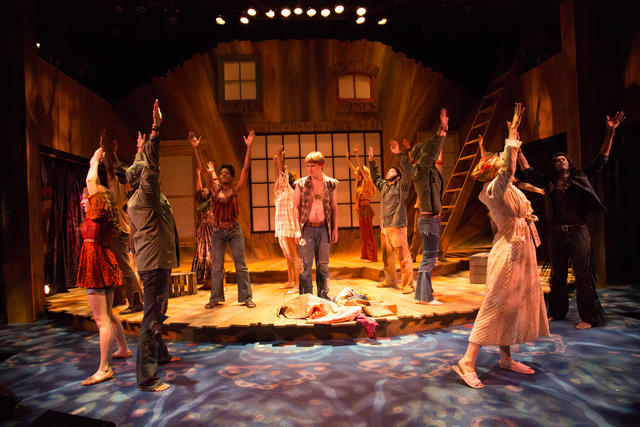 “Hair,” the seminal 1967 musical, has an important subtitle, which Berkshire Theatre Group has chosen not to use: “The American Tribal Love-Rock Musical.” It best describes the atmosphere and physical experience of the show and, without it, there is something missing. It was the first major breakthrough of contemporary rock music on the American stage; the company worked like a “tribe,” keeping to themselves and staying with one another most of the time, a family of performers with similar convictions as their characters; it was a show about the movement of love that surrounded this country and its war-bound politics at the time. Seeing the show today is an experience that will vary with the viewer’s experience of the time in which it was originally performed, 51 years ago. It is as much a “period piece” as “South Pacific” is for the second world war, as “West Side Story” is for the gang-infested streets of Manhattan in the 1950s, as “Hairspray” is for the integration of television in the 1960s. These shows are revivable as long as you don’t try to update them in any way. “Hair” is the same sort of show. Updating it in any way removes some of its importance and relevance and charm.

I have seen other productions of “Hair” that have severely damaged the piece by trying to make it relevant to today. At the Unicorn Theatre on the Berkshire Theatre Group’s Stockbridge campus, the show has been modestly tampered with but it has not been altered to add new concepts or to bring it into the 21st century. This is a good thing. But certain elements have been, shall we say, re-ordered and that hurts the final product. The songs ought to be sung in a completely period, as-written fashion and, instead, there are modern singer alterations, scatting and improvising, adding grace notes and scoops where clean singing should be the style. The delivery of this material requires taking it as written and not bringing it into today’s world of singing. This only harms a wonderful score. I am not saying that the actors in this production are not good singers; they all have wonderful voices. It is just that 2018 renditions do not do justice to the writing and do change our perception of the period of the play, and that works against the piece as a whole.

Unlike other musicals presented on this stage, the company is largely made-up of Actor’s Equity professionals, so the production cost must be higher than normal and it is a large company of 15 players. This is probably why, at least in part, the band has been reduced to only four players and that is why the sound of the show is unlike the original off-Broadway, nightclub or Broadway originals from 1967 and 1968. The sound of music in a show like this one makes a world of difference in how we receive it. I wish the band was larger, that there was no artificial sound in the mix and that the songs — which really define the characters — were left intact as written and scored.

That said, the cast is wonderful. Andrew Cekala is a sweet-faced and sweet-voiced Claude, the draft dodger who finally faces his responsibility and suffers for it. He plays the most sympathetic male character, a hard-nosed romantic who wants to believe the hippy creed but stumbles a bit on his way to full membership in the Tribe. Cekala has a great stage presence, his looks and his body language expressive and consistently wholesome. His final scenes are heart-rending.

His guide, mentor and rival for Sheila’s affection is Berger, played with snap and drive and sexual excitement by Brandon Contreras. Contreras has the knack of holding center stage no matter where he actually is on the platforms that make up the playing areas in the Unicorn. He is a fine Berger and this production shines whenever he is singing, dancing or moving. Sheila, the girl he lives with who ultimately loves Claude who comes to live with them, is played beautifully by Kayla Foster. She is, however, one of the singers in this production who cannot sing the song as written but adds that modern touch of scat and grace notes all the time. Her scenes are touching, as are her many touches of hand to hand or hand to hip in passing. The physical relationships her Sheila maintains are varied and exquisitely portrayed by Foster.

Katie Birenboim’s Crissy sings my favorite song, “Frank Mills,” and does it perfectly, the lack of inflection showing the girl’s odd removal from reality that so neatly defines Crissy. Latoya Edwards’ Dionne opens the show with “Aquarius,” one of the all-time great opening numbers, and blows the audience away with it. As Woof, Will Porter sings the song “Sodomy” and then, much later, proceeds to entangle Mick Jagger in a most remarkable and funny way. He is funny throughout the show. Livvy Marcus and Kristopher Saint Louis are delicious in the number “What a Piece of Work is Man.”

Sarah Sun Park has an exquisite descant soprano part, which elevates the music beautifully in the ensembles. She, and everyone else, move and dance with joy and their depiction of the late 1960s, as choreographed by Lisa Shriver, is perfection.

Daisy Walker has directed the production with fluidity and a remarkable eye for scenic relationships. As many important moments are played upstage as downstage and the use of the auditorium brings the show very close to an interactive experience. Every social element of the era of the show is exposed in this production and that is wonderful.

One element of this show’s history is its famous nude scene at the end of Act One. It is not generally obligatory, although it has become expected. It didn’t exist in the original off-Broadway production at the new Public Theater and it didn’t exist in its next stop either at the Cheetah discotheque on Broadway. Its final move to the Biltmore with a new director, Tom O’Horgan, brought it to the stage — this production played for four years, by the way. A nude scene can have an impact and, in the case of the production in Stockbridge, that impact is severely negative. Not even seen in half-light (on Broadway it was full-frontal, hot-lit) this edition provides only sketchy profile looks and outlines of dark bodies against a backlit scrim. It is true that this is not what the play is about, but the expression of complete freedom and lack of inhibition became the show’s cry of freedom. It would have been better not to include it at all than to turn it into a teaser that never satisfies in any way and leaves an audience pouting and unsure about the strength of the play itself.

The set is anything but natural and, designed by Jason Simms, it is its own expression of flower power. Patricia M. Nichols’ lighting design is generally fine and the costumes by Shane E. Ballard must take credit for the view of the 1960s, from the average middle-class parents to the dropout hippy to the fantasy dream-sequence romantics.

The show certainly did not take me back to my 20s, although it reminded me definitively of all I’d lived through back then. I loved hearing the score again sung so (generally) well. It was an interesting reminder of the political tensions we lived with and a worthwhile look at how my generation was dealing with the daily threats of violence and military matters. I’ve always had a soft spot in my heart for “Hair,” and it was gently and warmly rubbed in the Unicorn Theatre. It left me a mostly happy puppy, hungry for more affection and an old-fashioned bowl of theatrical mush.