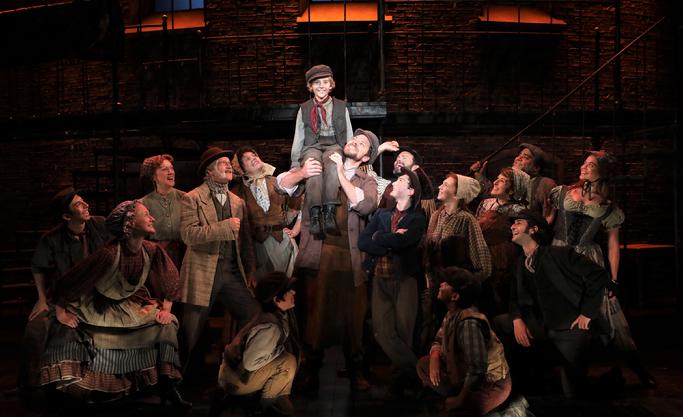 Elijah Rayman as Oliver Twist, center, in 'Consider Yourself' in the Goodspeed Musicals production of 'Oliver!' Photo: Diane Sobolewski

Oliver!
Book, lyrics and music by Lionel Bart
Based on the novel “Oliver Twist” by Charles Dickens
Directed by Rob Ruggiero

“Never before has a boy wanted ‘more.'”

“Oliver!” is based on Charles Dickens’ novel “Oliver Twist” and, without that certain twist, it falls short of the author’s intent. He was more interested in social reform than in social celebration, and the 1963 Lionel Bart musical, now playing at Goodspeed Musicals, certainly spends more time on the latter than on the former. Musicals should be entertaining and there is a lot of good entertainment in this show. However, if you look at it with one eye closed, you are left with a lot of social issues that are hard to enjoy: child abuse in its many variant forms, prostitution, thievery, abduction, spousal abuse, criminal behavior, and sadism and masochism, just to name a few. Racial stereotyping also plays a major role in this show, exacerbated in this production by a sly reference to the hero of another musical from this period, “Fiddler on the Roof.”

Just as Tevye, in that other show, is followed on his journey by a Jewish spirit, a man with a violin who plays the milkman off the stage, so Fagin the Jew is pursued by a fiddler onstage clearly identifying him in that racial, theatrical manner. It is, frankly, unnecessary and almost insulting. Fagin, the man who harbors criminals, fosters prostitution and trains children to steal all for his own enrichment is a Jew, but, in this edition of the show, he is marked over and over by this specific visual; that comes on top of the worst criminal in the show referring to Fagin as Fagin the Jew. I don’t think I was the only person offended—in fact, I know I wasn’t.

“Oliver!” has some famous and popular songs, which is not surprising as Lionel Bart was a composer of popular songs before he wrote this stage show. He wrote many songs for Tommy Steele and the Top 10 song “Living Doll.” For this show, he offered “Food, Glorious Food,” “Consider Yourself,” “Where is Love,” “Who Will Buy,” “I’d Do Anything” and the biggest hit of his career: “As Long As He Needs Me.” That final song, a major ballad, is the single most celebratory endorsement of masochistic behavior ever to make the hit parade, especially as sung by its originator, Georgia Brown. It never mentions love in any respectable form and it expresses the singer’s willingness to take all abuse as long as the abuser needs her around to take it from him.

All of that said, I do like this show; I always have. Maybe it’s my British heritage, but it has a sense of autobiography for me. The one thing the musical really needs is a title character actor who is adorable, charming, and a good singer with a smile that melts the meanest heart. That is something that this production doesn’t quite possess. The boy playing Oliver Twist, Elijah Rayman, seems to be very sweet, but he doesn’t get much beyond that one asset across the footlights. His counterpart, the Artful Dodger, is played by a very tall young boy, Gavin Swartz, whose high-pitched voice felt very wrong for this character. He also has little charisma onstage, which is a pity because he is doing a very good job of playing with others. However, you should never be able to lose track of the Dodger and, in this production, he disappears all too easily.

As the villainous Bill Sikes, Brandon Andrus does a nice job with his song “My Name,” a sinister tune and lyric celebrating the existence of a total blackguard who ultimately turns into a vicious murderer right before our eyes. Andrus is an imposing figure and he plays Bill very well indeed.

Among the many character actors in this musical, a few were absolutely superb. Richard R. Henry as the Beadle was delightful. Joy Hermalyn as Widow Corney made a perfect foil for the Beadle in the romance department. Andrew Mayer was a perfect horror of a lad as the undertaker’s assistant. James Young was a fine and noble Mr. Brownlow, although the musical never really tells us why he turned out his pregnant daughter, leaving her to fate and the elements.

As Fagin (the Jew), Donald Corren gets to sing some of the most delightful ditties in the show. “Reviewing the Situation” with its delicious comic lyrics; “Be Back Soon,” which is a lyrical expression of child abuse that works nicely in Corren’s rendition; and, of course, his participation in other numbers help to give this character a pleasant aspect. Corren is wonderful in the role. He does as much as anyone could to make this villainous creature into a shining feature of the play.

What he cannot do alone is done in conjunction with the other lowlifes in the company, most especially Bill Sikes and his prostitute/lover, Nancy. Director Rob Ruggiero is at his best exploring the physical dynamics among this trio of characters. His work throughout the show is surprising, sometimes pleasing to the eye and sometimes confusing. He has little help from a set that looks like a turntable with a front-crossover scaffolding, but the set never turns and it impinges on the playing space so that the large ensemble always seems to be squeezed forward. This is one reason it’s hard to keep track of the Artful Dodger. We do get the sense of a crowded section of the city, but we also never lose that sense on this stage.

The set was designed by Michael Schweikardt. The costumes, which certainly speak of the time and the place, were designed by Alejo Vietti, who has done a fine job here. John Lasiter’s lighting was highly atmospheric and sometimes didn’t do enough to keep us focused on the people at the center of the action. Dialect coach Robert Davis did such a fine job with the accents that sometimes no one could be understood.

It is certainly the actress playing Nancy who holds the success of the show in her hands. EJ Zimmerman plays Nancy, who claims to have “A Fine Life” “As Long As He Needs Me.” She has a strong, lush voice; moves like a well-trained dancer; and dances with the best on this stage. She also plays her scenes with heart and warmth and charm when she needs to. She comes the closest to Dickens in this show of anyone in any role. Her ballad, mentioned above, was moving and her second-act opener, “Oom Pah Pah,” had all the glory of the improvised pub songs one can still occasionally hear in London if one is lucky. This actress is a find and I hope Goodspeed keeps her around for other shows in the coming seasons.

“Oliver!” has been an old favorite show for me for many years, but it has clearly lost some of its pull, some of its charm. I often sing the songs and, if you don’t know the show and see it, I can almost guarantee that you’ll be singing them, as well. In fact, many people in the audience were singing along throughout the night—it’s that kind of show. You almost feel you were invited out for the night to the local where you got caught up in the spirit of the place. But remember not to get too caught up in this musical about crime, lust, vice, abuse and so on. Oliver asks for a little bit more in the opening scene, and I would ask the same of this production: a little bit more, please, of the pleasing aspects of the show and a little bit less of the darkest side—it’s inescapable, so it doesn’t need the extra pushes and shoves it gets in this production.

Oliver! plays at Goodspeed Musicals in East Haddam, CT through Thursday, Sept. 13. For information and tickets, see the Berkshire Edge calendar, go to goodspeed.org or call the box office at (860) 873-8668.