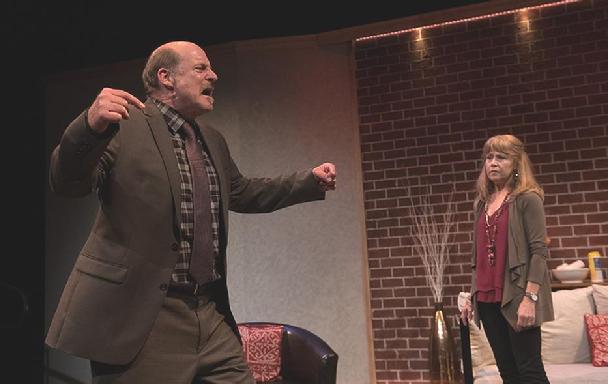 “You finish up humiliated”

Four sensible people cannot contain their anger, wrath, hatred and scorn in Yasmina Reza’s ostensible comedy “God of Carnage,” currently playing at Shakespeare and Company in Lenox, Massachusetts. I say “ostensible” because a comedy is supposed to be funny and, while this production is very funny at times, it is also, as in previous productions I’ve seen, not really funny at all. The two couples in this play are at odds over an incident involving their children and, no matter how they come to it, from the first lines of the play to the last ones, every attempt to be civil, pleasant and charming ends up literally in the toilet. The first time I saw this play, better forgotten, I laughed perhaps once and was disgusted with myself for having wasted my evening. The second time, only two years ago, I was amused but still hated the play itself. I watched the Roman Polanski film last year and found the piece deadly dull and about as funny as his foray into Nazi-occupied Poland in “The Player.”

This time, under the deft direction of Regge Life, I laughed a great deal and found the humor in the dark situations that emerge one after the other. Life’s vision of the play sparkles in the hands of a quartet of seasoned players who have been involved with one another for years, know one another’s quirks of interpretation and complement one another. This combination of circumstances has given the play its natural comedy and allowed the darkness to dissolve into silliness and the black humor to shine through as though it was always meant to delight rather than to chill the blood.

Allyn Burrows and Kristin Wold play Alan and Annette Raleigh, parents of the boy whose anger sparked an attack with a heavy stick that has broken the teeth of the other child. She is a professional whose business suit and subdued demeanor mask a passionate, emotional woman whose husband and his shady business practices physically disgust her. Burrows is a lawyer engaged in the cover-up of a drug gone rogue who puts his clients ahead of his family and his work ahead of the problem-solving that has brought the quartet together. As visitors to the other family’s home, these two violate every rule of company and they do so without a moment’s regret at their actions and their attitudes.

The hosts, Michael and Veronica Novak, are people whose societal level is discreetly lower than their guests’ social positions, though she is an art scholar and he a successful business man working with hardware. They make themselves as unpleasant to their visitors as any two people could. So from the outset, Jonathan Croy has to be condescending as Michael and Elizabeth Aspenlieder takes an officious position as the protectoress of her domain and her family. There are no two actors funnier than Aspenlieder and Croy, as they have proven over the years. But in this play, they must be as serious as possible for the humor to emerge and they perform that task superbly.

Burrows, on the other hand, needs to betray his professional and his social status to become a companionable and humorous individual, which is something that Michael, in Croy’s perfect manner, pulls out of the man. Their interchanges move from awkward to more awkward and from curious to laugh-out-loud remarkable. They are aided by the sidelong glances from Aspenlieder that punctuate the men’s dialogue.

It could be said, in fact, that the men are at the center of the play. Their differences and their mutualities provide a great deal of laughter, especially once Michael blows up and drops all pretense. Croy is a master of such moments as he proves, once again stripping off his clothes to present the Neanderthal aspects of his manhood.

As the play swerves away from its initial topic and becomes gradually a play about the double twain of adults intruding on adults and their life choices, it takes on the patina of social perceptions. The humor of differences overtakes the humor of humility and humiliation. Kristin Wold’s physical reactions to the situation are glorious and almost as upsetting to the audience as to her own character. If there is a way to smash through the traditional fourth wall (the invisible curtain between players and audience), it takes place in Wold’s manipulation of a couch pillow and a coffee table. She manages to use her stage presence to thrust us back into our seats and allow her to continue on her annoyingly destructive way.

Even so, with all of this talent at work, no one takes center stage better than Elizabeth Aspenlieder. She doesn’t need to be physically in that position to grab attention. All she has to do is look at the person holding forth and react to his or her words or actions. What she sees and feels from inside her character we also see and feel. When she is disgusted by something her husband does, Veronica imparts that disgust to us and we feel it, too. When she rises in triumph over a word choice or an admission of guilt, that triumph is echoed by her audience. This actress has a way of immersing herself into her role and giving us the sense that Veronica is real and Elizabeth is somewhere else for the time being and, even four minutes into the play, the actress is forgotten and the woman exists. This provides the play with an immediacy that captivates us and we react with her, as she practically commands. What she finds funny, we find funny. What she is appalled by chills us. Croy brings out her rage. Wold brings out her complex and conflicted reactions to “superior” women, and we get exactly what she feels. This is an extraordinary performance, both funny and frightening.

No set can be totally realistic on the Elayne P. Bernstein stage, and this almost one-dimensional place designed by Devon Drohan is the ideal set for this play. Charlotte Palmer-Lane’s costumes define their wearers’ characters from first view. James W. Bilnoski’s lighting has an atmospheric appearance that triggers a sense of the artificial lighting in a New York apartment on a busy and noisy street with appropriate traffic sounds provided by Amy Altadonna. Life, the director, has brought the life of absent children into the picture without us ever seeing them. He has used the troubled and difficult script as a means to showcase wonderful talents and allow them the opportunities to make stage reality into photo opportunities that often feel real and just as often make us want to laugh just to relieve the pressure.

So now, finally, I can say I enjoyed Reza’s play. I can admit that the play is one where the subtleties are grand gestures and the laughter comes from the dichotomy of imposed reality on a situation that has no outcome. If I’ve confused you, then you’ve gotten the show right and you only need to see it to understand how complexity commands simplicity.

God of Carnage plays at the Elayne P. Bernstein Theatre on the Shakespeare & Company property at 70 Kemble St., Lenox, Massachusetts, through Sunday, Oct. 8. For information and tickets, see the Berkshire Edge calendar, contact the box office at (413) 637-3353 or go online to shakespeare.org.