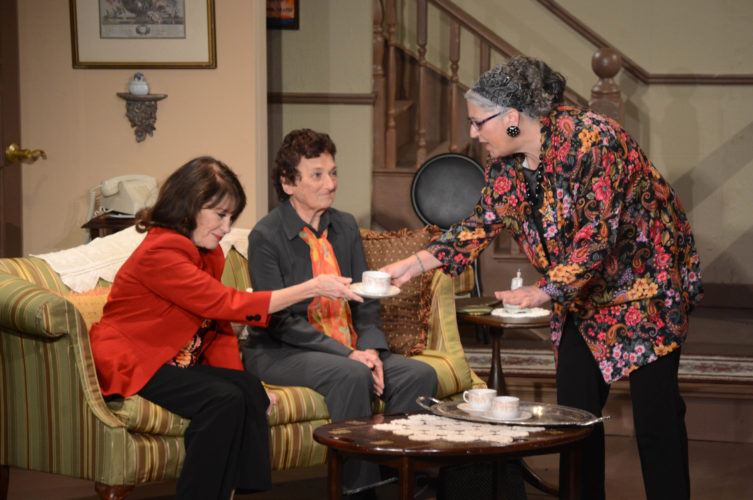 Judith Wyatt as Lucille, Lael Locke as Doris and Jackie DeGiorgis as Ida in the Ghent Playhouse's 2019 production of 'The Cemetery Club.' Photo: Cindy Smith

The Cemetery Club
By Ivan Menchell
Directed by John Trainor

“I thought you were going to rest in peace.”

Three Jewish widows accompany one another every month to the local cemetery where their husbands are buried. Like their canasta and mahjong, groups they are an informal club. But there are rules, just not ones written down or often spoken. One of them has to do with their futures: Lucille is a floozy; she is kept at bay by Ida who hasn’t dated anyone; Doris prefers to stay aloof and just judge the other two when it’s appropriate (which it never is, but she doesn’t know that). A widowed butcher named Sam comes into their lives and begins to alter their routine, and then he brings a fourth widow into the picture as they all go off to witness the fifth marriage of yet another widowed friend. That’s the story of this play set in the present, though it does feel more like the 1980s. On a terrific set either designed by Cathy Lee-Visscher or Sam Reilly — depending on which part of the program you believe — this story plays out under the guidance of director John Trainor.

The women are seemingly ideally cast. Lael Locke just IS Doris. She sets herself a standard and never varies from it, though, now and then, she can say something that just slaps across your heart. She is adept at being the nicest mean girl in a group. She endears herself to those whose behavior she obsesses over. Locke does very well as this particular woman, someone who can sting you with a sentimental smack and then pour you tea you’d never question if your life depended on it.

Lucille, the obviously slutty one, is played with gusto and pizzazz by Judith Wyatt. Lucille’s blatant flirtatious nature tells its own story, and one that might not be real after all. Wyatt has some very funny lines to use to build this character’s moral sense and she used them well. Ida, the heroine of this story, is played by Jackie DeGiorgis, who gives a most effective performance. She is sensitive and just a bit moody as she flutters from charming to nearly charming with a pause for the maudlin moments now and then. All three handle their characters perfectly, never losing sight of who they are and what they represent.

Costume designer Joanne Maurer has done some silly if wonderful things for this play. The three friends are bridesmaids for their never-seen eternal-bride friend. Peach satin with a delicate neckline is a bit much for the three, but Lucille reformats the design of her gown, emphasizing her real potential of sluttiness, and the laughs ring out. Like Lucille’s accumulation of mink, the dresses emphasize the time-sensitive nature of the script, which has aged since I last saw this play. It isn’t so far out of date that it makes a big difference, but it is a slightly awkward moment when you understand that the time is mid-autumn but not a recent one.

The humor in this play relies on the timing as much as it does on the writing. On opening night, the cast’s second with an audience, there were some difficulties with timing the lines for maximum effect. There were times when an immediate reaction would have gotten a laugh where a pause only got a sigh from the audience. We know that this comes from the experience with an audience, so I have no fear about some of the best lines getting lost in the future because an actor took a moment to breathe.

One actor here is particularly sensitive to the less-than-necessary pause. Peter Podol as Sam has a sweet personality onstage, making him almost ideal for Sam. He is a slow speaker, though, and that intrudes a bit, making even the romantic scenes a bit awkward at times. His scenes with DeGiorgis have great potential, but those ideals weren’t quite in view as yet. Ida needs to see a hopeful future if this play is to succeed, and I think she could only manage a sedentary next step with this particular Sam. A better one is in the vicinity, and I hope that Podol can find it for so much of the play’s anticipated triumphs lie in his butchers’ hands.

The unexpected wedding party date, Mildred, is played by Ellen Lieberman. She plays with a genuinely intrusive style, out of rhythm with the other three widows and with Sam as well. Mildred knows she doesn’t belong with the others, but she is the “date” and she plays that advantage with every motion, every word, every gesture. Lieberman does a very nice job with this one scene role and she leaves a strong impression behind. She is an excellent contrast to the other three women, particularly to Ida, who remains the person we see and admire the most.

Director John Trainor has done very well with this script although I am certain he could do better. So often it is the tweaks and the actors’ ability to adjust that makes all the difference. Mildred, for example, has all the aspects of a chatterbox and a gossip, and Ida is restrained in her presence. Giving Mildred a better punch would inspire the audience to see and enjoy the differences here that make some friendships more of a chore than a delight.

“The Cemetery Club” is enjoyable enough and with a few more performances, should jell into the sort of appetizer that makes a season into a delectable dinner party. This show has that potential. What will help everyone adjust well is an audience willing to look, listen and laugh. You could be that audience.

The Cemetery Club plays at the Ghent Playhouse, 6 Town Hall Place on Route 66 in Ghent, New York, through Sunday, Oct. 27. For information and tickets, see the Berkshire Edge calendar, call (800) 838-3006 or go to www.ghentplayhouse.org.