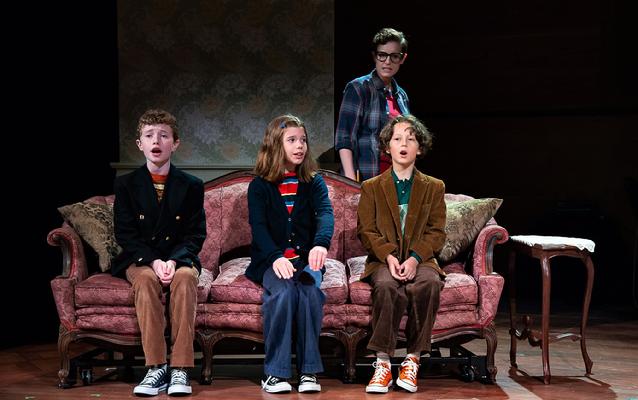 “Fun Home” is the lovestory of a girl and her father. He is a complex, troubled and giving man whose daughter has a complex, troubled and giving life of her own. This musical gives us three ages of the girl, played by three different actresses, while the father is in the hands of a single individual whose principal difficulty is the unwavering sense of the man through the years. The father of three, the husband of one woman, the creator of three careers teaching, restoring old homes and running a funeral parlor is the possessor of a secret — he is a gay man with a certain passion for older boys. He sees himself out on the “Edges of the World” and he finds himself soaring there, taking the sky with his daughter. What becomes of this man is at the center of this show and at the center of the life his daughter has led and will continue to lead.

This all sounds dark, I know, but it isn’t. In its current production in the Weston Playhouse’s new second stage space at Walker Farm, it is a charming, almost pretty little musical for nine actors, five musicians and a talented team of creative artists. The three-quarter thrust stage allows for much flexibility as Alison Bechdel draws her book about growing up in this family. Her workstation floats through her memories, taking things in at different angles and from different perspectives. Her connection with the subject of her own life is sometimes tenuous, sometimes so integral to her work that, without the point of view she chooses, she could not do her work. Her father’s story is tied with hers the way shoelaces are tied: tight, with large loops, tassels and the freedom of separation. There is an integrity to the integration of their personal stories and she, at least, becomes the person they both want to be.

Alison is beautifully played by Andrea Prestinario. Her small-child version of herself is equally well played by Ava Lynn Vercellone and the teenage Alison is superbly portrayed by Caitlin Kinnunen. It is excellent casting, for all three bear a resemblance to the actor playing her father, David Bonnano. Ostensibly the story of Alison, it is really the story of Bruce Bechdel. His choices and his behavior are the most influential on his daughter, whose talent for commenting on life at home is hers from her earliest days. Small Alison sings about her home life with honesty and that is wonderful. This isn’t an Oliver Twist life experience; it is Midwest Americana with parents fighting, family togetherness, friendly helpers and creative inspiration. Vercellone sings with gusto and her happiness is clear from the start. She is a demanding child in this role, and even those demands ultimately sit well with the audience because they clearly come from someone in need of connection. This young actress plays it all with that particular honesty that children can bring to the stage.

David Bonnano is at his best in the role of Bruce. He spreads warmth with each appearance on the stage, even when he and his wife, Helen, wonderfully portrayed by Susan Haefner, argue. Haefner has a dramatic moment late in the play when she confesses to her daughter how difficult her marriage to Bruce has been and, as usual, sings with clear, fine tones and an interpretive skill that lets her performance shine. But Bonnano almost seems to be living Bruce rather than playing him. His every gesture, musical expression and speech reeks with reality. There is a quality to his work here that is hard to define or explain. His masculinity is never in question, neither is his obvious affection for Helen. When he and his college-aged daughter sit down in his car to discuss her life as a reflection of his life, he becomes the man that she has already spoken of and the change is chilling. Their duet, “Telephone Wire,” is one of the best moments in this show and one that will be hard to forget. Its result, probably, is the tragedy of the show’s story.

The Alison of the moment is brilliant in this sequence and, in Middle Alison’s solo song “Changing My Major” as well, there is a life force shared by the three Alisons that sparks feelings from the audience. Caitlin Kinnunen has a strong future as a performer based on her work in this show. She sings with strength, taking on a lovely beauty as she relates her feelings through the music, feelings inspired by a girl named Joan played here with a curious pansexuality by Holly Gould. As Gould’s character grows, Joan becomes the sort of friend everyone wants, not just a typical college activist. The two young women work very well together and so their characters’ friendship works very well.

Alison’s brothers are nicely played by Ryder Scott and Emmett Smyth, and the various men in Bruce’s life, four in all, are played to individual perfection by Adam Shonkwiler. However, it is the total integration of the three Alisons and the space that is the stage, directed so beautifully by Malcolm Ewen, that makes this show a magical reality experience. We all believe we can see ourselves as we were but Ewen’s staging of the play allows Alison to go one better, to actually live among her earlier selves without it ever seeming “theatrical.” He has given the show a quality of honesty — there’s that word again — which keeps it a living document and not just another musical.

He is aided immensely by the lighting design of Stuart Duke, who points us in the right directions and allows us to feel the shifts in reality that Ewen has directed. Mara Blumenfeld’s costumes are straightforward and right for these people, and Howard C. Jones and his props master or mistress have done the physical properties of this production in excellent fashion.

This is the second production of this show that I have seen and I must say it is the better of the two. In the Walker Farm space, I felt the show’s impact the way I would a first-person narrative rather than a distant retelling of a personal tale. It may be the closeness of the actors, or perhaps it is their ironic renditions of real people, but the show felt immediate and positive and even rather relaxed instead of staged. This company has made the show mine to take away and not something to be talked about later. Prestinario’s performance is at the heart of that. Her pain at reliving something her character takes on herself is so tenderly played that I felt it, too; perhaps we all did, for the audience literally leapt to its feet to give her the accolades she richly deserved.

Fun Home plays at the theater at Walker Farm, 705 Main St., Weston, Vermont, through Saturday, July 28. For information and tickets, see the Berkshire Edge calendar, go online to www.westonplayhouse.org or call the box office at (802) 824-5288.