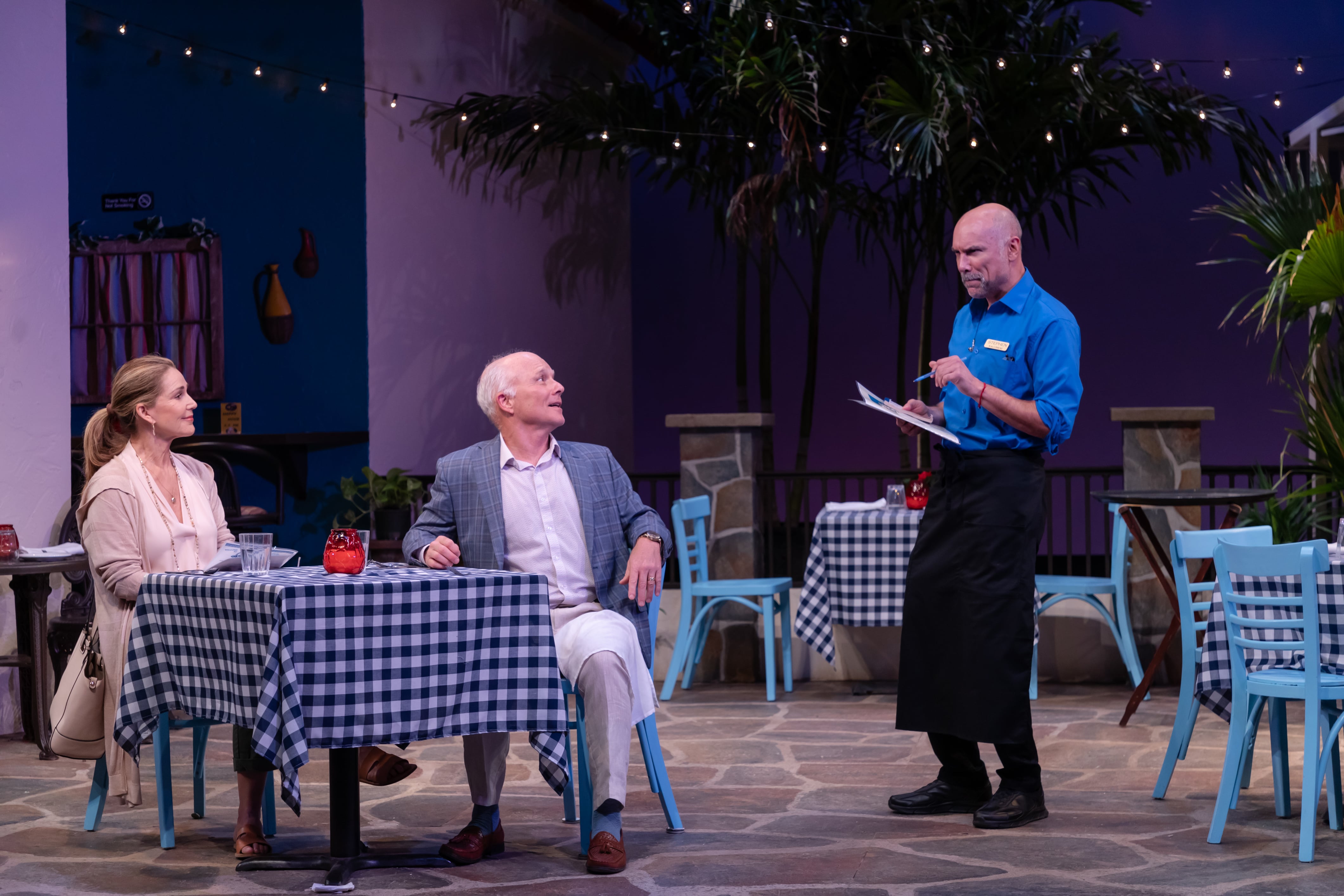 “I’d even eat a braised kitten at this point.”

At this point in the season, a good comedy is what is needed. So much drama this season! Even the musicals are more dramatic. It’s time to sit back and roar with laughter. That is exactly what the good people at the Dorset Theatre Festival in Vermont have done: They’ve given us 90 minutes of belly-roar laughter with their final play of the season, “Slow Food” by Wendy MacLeod. An East Coast couple celebrating 23 years of marriage on a trip to Palm Springs, California, find themselves trapped in a restaurant at the mercy of a mercurial waiter. Alone at a table on a terrace with this terrorizingly Teutonic seneschal, they suffer his moods, his habits, his quirks and his adoration. It’s a comedy, the sort of comedy we all dread encountering in real life on a Sunday night in March in a strange place that claims to be a Greek restaurant, though there is no spanakopita. We fear it for real, but we laugh ourselves silly at it in a play. We do.

The play is in one long act: 84 minutes from start to finish (it would run closer to 90 minutes if actress Peri Gilpin would hold for laughs instead of rapidly continuing on with her next line). Imagine being caught in a restaurant where you cannot get served for that long, not even a beer in a bottle, at the whim of a waiter with issues. Imagine knowing that the only other place open for food is a McDonalds or a Burger King. Imagine flying 3,000 miles, not having a rental car available and learning that your hotel cannot provide the promised accommodations. Then add to it this waiter and his weird sense of service. Imagine that, and you have the plight that Irene and Peter confront in this play. Then imagine it is funny, and you have this production.

Gilpin is really very good. She is expressive and gets her laughs by not playing to them. For Irene, while the situation is difficult and odd, it is something she can handle if only her husband would not be rude, and not misbehave or bait the waiter. She is self-inspiring until pushed into hypoglycemia, at which point she defers to her baser instincts. I heard someone in the audience afterward refer to this play as “just a basic sitcom,” but he must not have been watching Gilpin, for this play is not that kind of thing at all. There is no second episode here. The play completes its own cycle very well and most of the work of that is Gilpin’s sensible contribution.

Irene encourages her husband, Peter, beautifully played by Dan Butler, to pretend he might be bisexual and flirt with the waiter, who clearly has marked him as a target for his abusive ways. Peter is at first uncomfortable with this, but when he turns from a belligerent diner into a flirtatious philanderer, the tone of the play alters hilariously.

It is the oddest of possible choices, but like so much in this play, it is almost inevitable. Butler is brilliant making the shift from one type of man to another, all for the cause of good service and some food. He turns Peter from a maddened clown into an almost Chaplinesque figure. And funnily enough, it almost works to Peter’s advantage.

But this waiter, Stephen, is no fool. Middle-aged, gay and lonely, he has dealt with bisexual husbands before, obviously. Greg Stuhr is absolutely wonderful in this role. He brings an absolute sense of purpose and concentration to the stage and he is almost completely unshakable. All Stephen demands from his customers is complete fealty. His purpose, his only purpose, is to bring them an unforgettable culinary experience and nothing can shake him from this goal. Stuhr has remarkable looks and glances; he has posture and poses and intentions that can bring anyone to wish they’d never left home. It’s a glorious interpretation of such a man.

This is more than a simple comedy. It is about the interpersonal skills that keep a marriage alive and well. It’s about the need to adjust relationships that bring you contentment. MacLeod has written a witty and wonderful play that lets you laugh a lot while the subliminal message penetrates your brain. It is a comedy about more than just comedy. Jackson Gay has allowed the message to seep past the lines into the visuals and she has done it with a small square table that provides intimacy as well as subtle distance. She has used the fine set design by Antje Ellerman to make all of this happen. Michael Giannitti’s very subtle lighting adds to the growing insecurity of Irene and Peter. The costumes by Fabian Fidel Aguilar do what they need to do in establishing the characters — Peter’s gentle formality, Irene’s easy psychological state.

At the end of August, a play that can do all that this one does and keep you laughing is a joy to discover. Just one word of warning: Don’t go to the theater hungry; you could turn into a ravaging beast by the end of it.

Slow Food plays at the Dorset Theatre Festival. 104 Cheney Road, Dorset, Vermont, through Saturday, Aug. 31. For information and tickets, see the Berkshire Edge calendar, call the box office at (802) 867-2223 or go to dorsettheatrefestival.org.