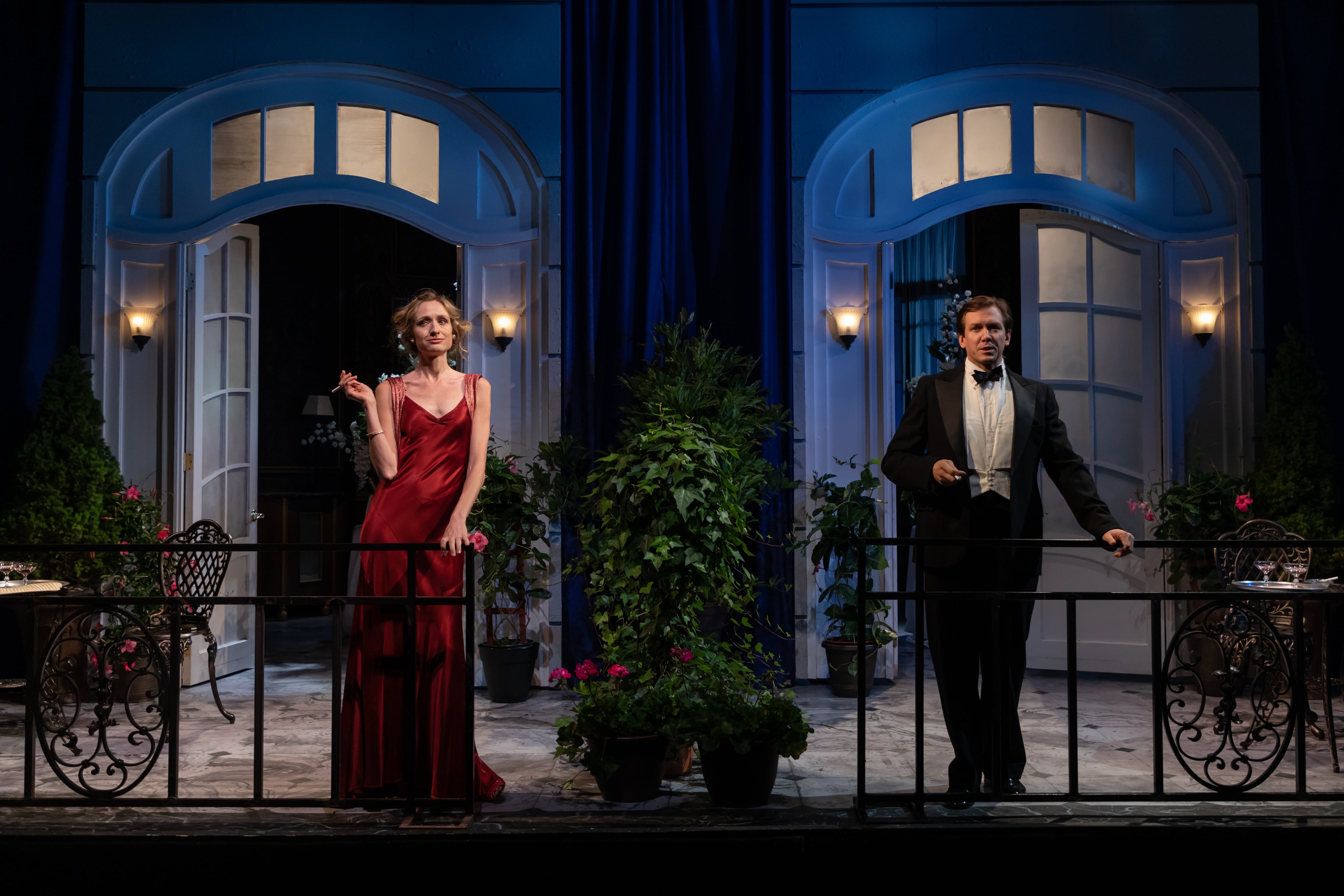 When a man confronts his young wife with such a statement about his first wife on the first night of their honeymoon, you can bet there’s trouble ahead. Elyot Chase tells his bride, Sybil, this and so much more, on their hotel balcony overlooking the sea, overlooking an orchestra in the garden that plays “cheap music” as they prepare for dinner. Minutes later, the female half of another honeymoon couple appears and has a confrontation with her fledgling husband about her first marriage. Could it be? It could! And with that, Noel Coward’s finest comedy, written for himself and his closest friend, Gertrude Lawrence, is off and running. What will happen when Elyot finds his neighbor is his former wife Amanda is, shall we say, complicated—complicated and extremely funny.

Amanda and Elyot are fated. Five years have passed since their divorce, but some things never change. He is still attracted to her and she still finds him hard to resist; and even though he’s not pitching anything, she is still catching and, once caught, is lost for good. In fact, there is no good left in him. This sprightly sex comedy caused a sensation in England and then in New York when Lawrence and Coward played these roles in 1930 with a young Laurence Olivier as Victor Prynne, Amanda’s new husband. The comedy was tight and explosive then and, in this new production at the Dorset Theatre Festival in Vermont, “explosive” is still a good word to describe the play and its players.

It is always surprising when a play that is now 89 years old still has its get-up-and-go, its gumption, its humor relatively intact and its impact just as imperative as it used to when first seen. Director Evan Yionoulis has taken away none of its period sensibility; there is no attempt to update anything about it, from the concept to the dialogue.

Yes, there is a mention of television, but that was an in-development technology that these smart, fashionable people would have heard about and talked of in their sophisticated lives, their private lives. Now, it just makes the line a joke as we think about married couples who, after five years, have let the TV set, the talk show or PBS news special, take over our private time together. The reference is simply funnier that it must have been back in 1930.

Dialect coach Patricia Norcia has given her actors wonderfully exact accents to help illumine their characters. Rachel Pickup’s angular Mayfair touches sometimes remove audible syllables, making a few of Amanda’s lines hard to grasp instantly. Elyot, as played by Shawn Fagan, adopts a slightly more Cambridge tone, and often pulls his voice down an octave in the middle of a word. For Sybil (played by Anna Crivelli), a symbol of the Midlands—Norfolk, actually—which Amanda categorizes as “flat,” presents herself with a flat tone sharpened by a shrill accent that sometimes makes her voice difficult to listen to as she goes through even a short speech. Hudson Oz’s Victor Prynne is from Greater London and is the most plainspoken Brit on the stage. His is a perfect radio voice for the time of this play. All four actors present their trained voices with a perfection and ease that makes them all the more believable in a play that truly has no set time, though it is meant to be the 1930s. I find the play suitable for all audiences in every time zone, in all its humorous glory. I have seen five productions over the last decade and this one is about the best I’ve seen, thanks to the players, the director and the designers involved.

The quartet are genuinely funny: That is the first thing you need to know about them. They have donned their roles as they have their period clothing, and they wear them casually and brightly just as they deliver their lines. There are crossover moments when, if you had your eyes closed, you couldn’t tell which couple is speaking, and this happens from start to finish. It is Coward’s concept that all men and women have the same things to say in about the same way if only given the opportunity. The question is, then, why change your spouse if you only end up with the same person at the end of the day? Coward’s answer to his own question is a simple one, and I challenge you to guess the answer. You may be surprised, but you will be entertained here as the battle of the sexes plays out as a battle of intellect and wit.

A fifth character, French maid Louise, is played with humor and finesse by Dee Pelletier, although her mime scene has been cut a bit shorter than usual. The final two acts, truncated into one act with two scenes, play out nicely with a growing sense of forbidden lustiness controlling the players. On an excellent set designed by Lee Savage, our two couples come to grips with unsought-for realities. The Parisian apartment provides a series of picture frames in which Yionoulis can quickly pose her players. The period costumes designed by Katherine Roth are lovely, and the sound work provided by Jane Shaw adds a definite hint of the time of the play whenever needed. Donald Holder’s lighting provides excellent focus for the audience as the principals move in all directions. B.H. Barry does his usual excellent job staging the fights, and the fights in this play are famous ones, causing some consternation in the British censor’s office way back when.

All too often this play is left in the hands of amateurs in community theater, but in Dorset, it has a first-class production with professionals riding gain on their emotions. I always enjoy a good production of “Private Lives” and this one is much better than just good. It is a very realistic, less laugh-riot edition, but its truths come forward with every advancing minute and the human humors are just humorous enough for me.