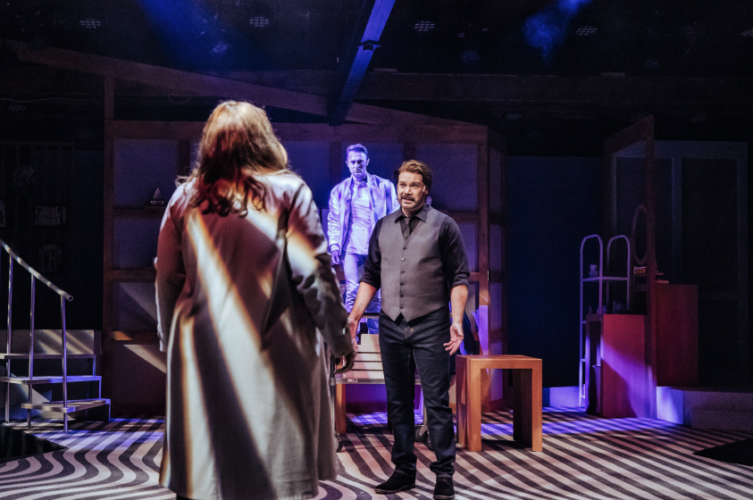 Chatham, N.Y. — Electric shock therapy marks the entry to intermission in “Next to Normal,” now on stage at the Mac-Haydn Theatre in Chatham, New York, a drastic remedy for the combination of manic depression, delusionalism, schizophrenia and other mental complications suffered by Diana, wife of Dan, mother of Natalie and Gabe. Haunted by her son, hated by her daughter and hollowed out by her overly attentive husband, Diana is losing her mind (not in the Sondheim sense) and her musical numbers are growing more and more symptomatic. This is the show that director John Saunders has brought to vivid life and it is one of the best shows he has ever presented at this theater. I guarantee you will be moved and motivated by this six-character extravaganza. I guarantee it.

Beth Kirkpatrick as Diana and Eric Van Tielen as Dan join company favorites Gabe Belyeu as Doctora Fine and Madden, Amber Mawande-Spytek as Natalie and Kylan Ross as Gabe to bring this show to the stage superbly designed by Emma Cummings. The cast is rounded out by the talented Andrew Burton Kelley who brings some genuine warmth to the show’s overwrought plot. Ross’s exuberant “I’m Alive!” not only haunts Diana, it will undoubtedly haunt me as well for a long, long while. Mawande-Spytek is the best she has ever been playing the teenage girl whose feelings dominate her life and ours, and whose drugs don’t ease her pain.

None of this may sound like excellent musical material but it actually works so much better than you might imagine. “Next to Normal” won the Tony Award and the Pulitzer Prize in 2009  and if there were a psychiatric award for musicalization of fear, trauma and constant dilemma it would have won that also. Human frailty, human strength and human kindness pervade the play. It is a significant musical, not the sort of thing often seen in the musical theater.

This show begins with a celebratory tribute to “Just Another Day,” that reveals some of the heroine’s problems and it ends with the truths of marital love exploding left and right. Along the way Diana and Dan resolve their problems in the only ways possible. Many folks will not appreciate the ending of their story, but the logic of it is inescapable. Kirkpatrick is wonderful as Diana. She sings with fervor over her troubles and her attempts at understanding what has happened to her and her lovely voice makes it difficult to believe she has been so throughly under siege.

Van Tielen makes us understand how hard it is to be kind to someone who takes emotional risks to the cliff’s edge. He also has a fabulous voice and Dan’s fervent optimism is hard to take at times, but is actually mellowed by this actor’s performance.

Belyeu’s two doctors are discreetly different and as Dr. Madden he pushed the envelope hard and fast to vary from the almost frightening “Doctor Rock” to the complascent guy who earnestly believes “It’s Gonna Be Good.” This is his finest work at the Mac-Haydn since his Man of LaMancha. Under Saunders careful direction the whole company exercises their abilities to make manic enjoyable and make serious issues read as remarkably social. As the teenagers, Ross and Mawande-Spytek do their best work of the past two seasons and Kelley comes into his own. All three are very much “Alive” in their difficult dramatic roles.

The physical production is stunning with some of Andrew Gmoser’s most dynamic and illuminating lighting design. Bethany Marx’s costumes create their own revelations for these characters. Caitlin Maxwell’s wigs flesh out characters nicely. Conductor Eric Shorey and his five member music ensemble play the score so well you would think they were born to play it. Kudos to the technical staff for an outstanding job of making this complex production work so well with a special shout-out to the production stage manager Sage Lumsden for keeping everything so perfectly on track.

This is one of my favorite shows, one I never anticipated seeing at this theater. I am so glad they chose to do it. I think everyone should see it, and maybe even twice.

“Next to Normal,” book and lyrics by Brian Yorkey, music by Tom Kitt. Directed by John Saunders.