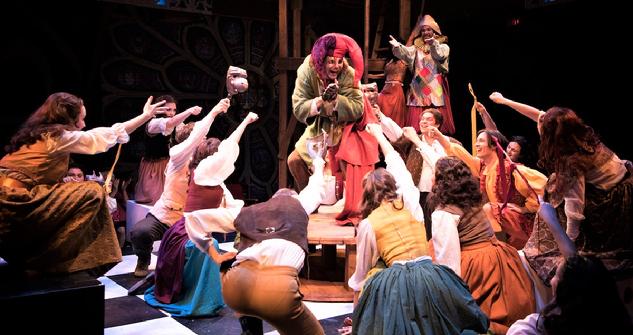 Sarah Kozma
James Benjamin Rodgers as Quasimodo. Gabe Belyeu as Clopin Trouillefou and the ensemble in the Mac-Haydn Theatre production of 'The Hunchback of Notre Dame.'

THEATRE REVIEW: Dark, obsessive ‘The Hunchback of Notre Dame’ at the Mac-Haydn is emotionally sound, beautiful

“You are beautiful, too.” 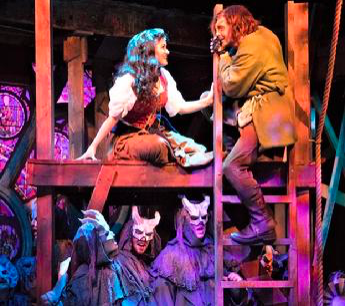 Laura Helm as Esmeralda and James Benjamin Rodgers as Quasimodo in the Mac-Haydn Theatre production of ‘The Hunchback of Notre Dame.’ Photo: Sarah Kozma

Two and a quarter hours after this show begins with the unhappy death of a young man and a gypsy girl who has just given birth to his child, another gypsy woman dies and the young man’s brother meets his untimely end at the hands of that baby. You can’t call this a typical musical comedy, nor a typical Disney product. It isn’t exactly family-friendly. It is, in fact, a musical with very few happy moments, but it works hard to prove the theory that everyone has a quality of beauty within them and that everyone deserves a chance to show that beauty to the world.

The baby becomes the hunchback bell-ringer at Notre Dame Cathedral, standing tall on an island in the middle of the Seine River in the heart of Paris, France. There is beauty in that location, certainly, and in the magnificent set designed by Andrew Gmoser; for the current production at the Mac-Haydn Theatre, there is great beauty indeed. Anyone who has traveled knows that visiting a place such as this is akin to experiencing their own personal Louvre Museum in a single building. Gmoser, who has also wonderfully designed the lighting for this show, gives us that experience on the circular stage in Chatham, New York.

His design work serves as the setting for a handful of human jewels who are shown off in terrific style here. Laura Helm is a delicate and delectable gypsy girl named Esmeralda. Quinto Ott, whose bass-baritone voice echoes off cathredral walls, plays the obsessive Dom Claude Frollo. Michael Brennan does everything but die for love of Esmeralda as he plays Phoebus de Martin. The hunchback, Quasimodo, is undertaken by James Benjamin Rodgers, a matinee idol-type in dreadful makeup and a hump-shouldered costume. 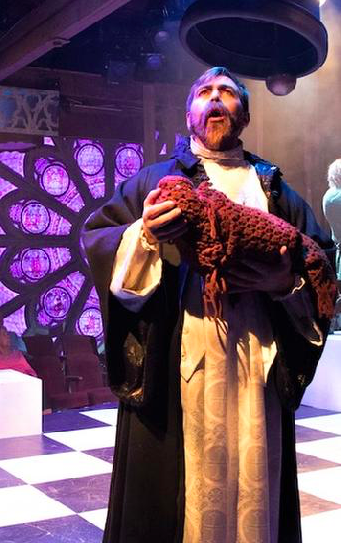 Quinto Ott as Dom Claude Frollo in the Mac-Haydn Theatre production of ‘The Hunchback of Notre Dame.’ Photo: Sarah Kozma

Ott is particularly welcome in the unhappy role of a religious man whose words of wisdom to his brother, nicely played by Randy Cain, are ignored with dire consequences. He plays the dark nature of Frollo from its seeming repulsed inception to its final moments of tyranny and religious fervor without allowing even a single moment of reversal into his interpretation. Even his desire, his need for love, is given a place in this pantheon of single-mindedness. On the brink of realizing his deeper needs, he is unwavering in his interpretation and his wonderful, rich voice brings us closer to his obsessive nature than we might expect. His final song, joined by the ghosts of his brother and the first gypsy woman, is a chilling experience.

Similarly, the love of Esmeralda inspires James Benjamin Rodgers’ interpretation of Quasimodo. From the song “Top of the World” through his rendition of “Made of Stone” with the gargoyles and statues of the cathedral, Rodgers is at the forefront of romanticism in this show. His natural good looks sometimes show through the harsh makeup and ugly wig he wears along with his Charles Laughton-style costume. His true inner sweetness and beauty come through his face, which ultimately cannot be transformed into the hideous creature that he portrays.

Esmeralda is charmingly portrayed by Laura Helm. It is clear from her first moment dancing in the square to the “Rhythm of the Tambourine” that her natural loveliness and talent will bring too much attention to this character. Helm has the stuff and she struts it without the cockiness of a peacock but rather with the pride of a well-bred society girl, giving Esmeralda the peculiar dichotomy of a being a gypsy who is also a Lady with a capital L. That the hunchback and his uncle are both ultimately obsessed by her seems just right for Helm’s portrayal.

Gabe Belyeu adds to this obsessiveness with his work as Clopin Trouillefou, the gypsy narrator of the tale. At every turn of the plot, Clopin is at hand urging Esmeralda to run, to turn her back on these men who cannot be anything but trouble for her. Belyeu sings, steals purses, stands up and fights, and neatly steals the show at times with his clever and subtle work in this role. Watching him work along with dancers, acrobats, mimes, singers and other principals is a real joy. 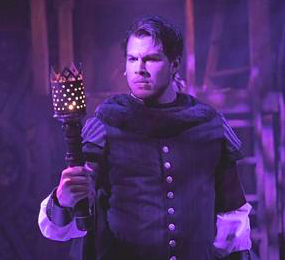 Michael Brennan as Phoebus de Martin in the Mac-Haydn Theatre production of ‘The Hunchback of Notre Dame.’ Photo: Sarah Kozma

As the hero of the evening, Michael Brennan’s Phoebus is a hapless, clueless, love-lorn and love-worn male incapable of seeing even 10 minutes into his own future. His loss at the end of the show is truly heart-rending and he plays it for all its worth. His duet with Helm, “Someday Soon,” was a highlight of the show.

The miracle of this musical is the magic of its movement. Sebastiani Romagnolo’s choreography keeps the denizens of Paris constantly on their feet, moving naturally and dramatically through the music of the moment. John Saunders’ direction is emotionally sound, and the characters he brings out through his cast’s work on stage is exactly what is needed to give the story honesty and reality. There wasn’t a single false note to be found in this company’s interpretations, and so the story maintained its novelistic power through fidelity to Hugo’s original intent.

The Mac-Haydn’s pit contains seven musicians playing 27 instruments, which is nothing short of miraculous, and the sound of this show is Broadway all the way. A show at the Mac has never sounded so wonderful nor looked so professional with Alison Zador’s perfect costumes, Kira Williams’ excellent wigs and whoever supervised the makeup for this production providing the perfect period looks for the women and the ideal grotesquery for the hunchback.

While there’s not enough memorable music to satisfy that side of me, the other elements of this show certainly provide enough pleasure to compensate. This is only a two-week run, so I advise running over to the theater now to secure those tickets while they’re still available.

The Hunchback of Notre Dame plays at the Mac-Haydn Theatre, 1925 Route 203, Chatham, New York, through Sunday, Aug. 5. For information and tickets, see the Berkshire Edge calendar, go to www.machaydntheatre.org or call the box office at 518-392-9292.