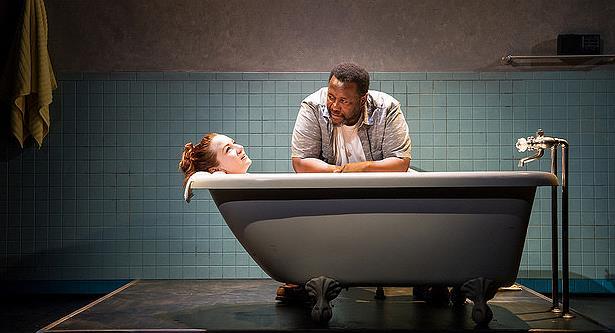 Cost of Living
By Martyna Majok
Directed by Jo Bonney

“The shit that happens is not to be understood. That’s from the Bible.”

The comedy of life is not to be taken lightly. Death can come to the characters in a comedy just as it can to those in a tragedy. The sad, contemporary reality, or distortion of reality, is that you don’t have to cry at death anymore; now it can be taken in stride, laughed at for a moment and it allows us to move on. For the four characters in Martyna Majok’s play “Cost of Living,” which is enjoying a remarkable run at the Williamstown Theatre Festival’s second space, the Nikos Stage, the truth here is that the passing of an adult into a different realm is not sad but merely the moment when priorities alter and new relationships can be forged.

Eddie and Ani are separated, possibly divorced, when Eddie gets a call from the woman he considers dead to him: a devastating accident has caused her to leave the life she has enjoyed and take on a different rationale in which her ex-husband must play a major, dynamic role.

Simultaneously, Jess, a bar habituee, takes on a caregiver role in the life of intellectually stable but physically scarred John. Eddie bathes Ani and attempts to sexually manipulate his ex-wife. Jess showers John and discovers he can be romantic as well as smart and she sets her cap for him. In both cases the results are not what either character anticipates and, lucky for us, not what we thought we saw coming.

One of the absolute joys of this production is that neither author nor director telegraphs the outcome of decisions made by their characters. We, the audience, are kept in a constant state of surprise. For a serious dramatic play, this is a wonderful additional element. All too often motives motivate emotional motion. In this play that does happen, but never in the way you expect.

Wendell Pierce plays Eddie and his off-putting monologue gets the ball rolling and, while it is never clear whether this is a late point in the story or an early one, the facts are that when Pierce finishes Eddie’s long speech, we are enlightened and ready for whatever comes next. Pierce is one of those actors whose face and voice are familiar though you may not know exactly why. His work here shows what a television actor can accomplish with the subtlety TV allows. On stage he comes across as sincere and honest and reliable and we know instantly that we can trust this character even if he cannot trust himself. Half of the play finds its eventual success in this actor’s work. He is the honesty lynchpin. He is the heart of the work. In his final scene, set in his home, the realities of Eddie’s life come slamming in on him and he moves us again over the potential loss of yet another possible relationship.

Pierce’s other half in the their scenes (or any other scene, for that matter) is played with enormous angst and distaste by Katy Sullivan, who ultimately realizes how important a role she plays in the life of her ex or even in her own. Seemingly pompous about this and that, she ultimately gives so much more than you can ever receive in all this. This character is 100 percent anger and self-involvement until things take a different turn in the bath, and what follows redefines love and its position in the world. Sullivan is dynamic; there’s no other way to describe her properly. She is outspoken, gruff, demanding, unaffectionate; a loving creature with no love left to use. Ani is fascinating and Sullivan gives her the strength to persist in the light of eventualities.

Playing a very different sort of soul is Gregg Mozgala as John. His eagerness to take on the world around him is as pleasurable as watching a favorite neighbor’s child do the same: we can be satisfied and pleased and yet remain aloof and uninvolved. When his helper, Jess, is providing him with the physical care that a man in a wheelchair and shower needs, he becomes the man to be dealt with. Her emotional turns depend here on how he behaves, how he handles this situation and that way is as leading as it is misleading, as quirky as it is quizzical. Mozgala has a natural manner of delivery that lets us take him on several levels simultaneously and never be upset when we discover how wrong we’ve been in judging him.

A brilliant mind is to be reckoned with. John has a brilliant mind. He has a body that is the opposite of brilliant and a social sense that is without understanding (or beyond understanding, depending on where you are in the issues that arise). Mozgala plays on the possibilities here with a little bit of joy that slips out as he is handled and unhanded by Jess. The actor may be more the actor in the role than we would at first assume. He is clever and fun to watch in this role that he has been involved with for the entire length of the play’s existence.

Perhaps the most difficult role is Jess, played by Rebecca Naomi Jones. Here is a character sensitive to the roles she plays in other people’s lives and in her own life as well. Name-calling never suits her. Emotional thrall is not her thing. Her life is an upside-down life and her existence depends on using her hands and her mind in unorthodox ways. A bar girl who takes on a caregiver role without thought to the consequences for herself is a wonderful girl indeed. But, when she finds herself in a situation that cannot be handled by the role of choice, she winds up in an embarrassing situation. Jones handles the long and gradual arc here brilliantly. She transforms herself into the perfect provider then falls as far from it as imaginable. She is the only character who interacts with more than one other person in the play, and the final scene is as close to earth-shattering as any I’ve seen on our local stages.

Jones and Pierce make a perfect pair of foils for the other two players, Mozgala and Sullivan. They are also the most inglorious mismatch on the road to romance. Luckily for them that road is not one explored beyond the introduction of the concept, for where their characters might go is a very different play than the one explored here by the author.

Director Jo Bonney keeps this show moving expertly as she nurtures these characters into genuine life with the help of this talented company of players. No possible moment or action goes unexplored or unused here. Bonney has cleverly used the superb set designed by Wilson Chin as though it was another character in the play. Jeff Croiter has turned lighting into a table of sensitivity, creating isolated spaces in a much larger world, one that looms in the first scene and returns in a very different mode at the end of the play. Jessica Pabst provides the kind of costumes that define characters, not just clothe them. The practical work here is superb and Bonney needs to be credited with melding the elements, human and technical, to come up with a new life form, the perfectly surprising play that satisfies without pandering to audience needs.

This was a play worth waiting for and a play that cries out to be seen. Its run is short, so waste no time debating. The play may not amuse you but it will enlighten you and, along the way, you will laugh – guaranteed. What could be better?

Cost of Living plays on the Nikos Stage at the Williamstown Theatre Festival’s home in the ’62 Center for Theatre and Dance on the Williams College campus at 1000 Main Street, Williamstown, Mass., through Sunday, July 10. For information and tickets, see the Berkshire Edge calendar, call the box office at (413) 597-3400, or go online to wtfestival.org.