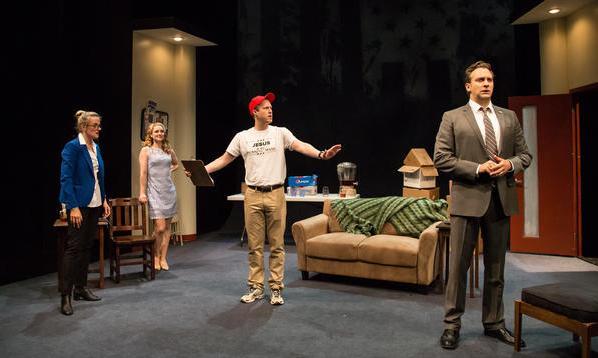 Very little sugar is added to the available brew currently on stage at the Unicorn Theatre in Stockbridge in Berkshire Theatre Group’s first play of the season. Jason Odell Williams’ one-act, 72-minute play is about politics, gun laws, violence and the U.S. Senate. It is the sort of experience where no prisoners are taken and the shock value of an act of extreme and unbelievable violence sets in slowly due to the coda of the play, a replay of an incident we never witnessed but heard discussed at great length. It is the structure of the play that shocks as much, if not more, than the central incident. 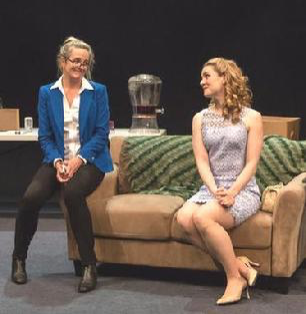 Williams has given us a man on the brink of a personal breakthrough, or perhaps a breakout, based on new convictions about God and the church and their place in the life and work of a politician faced with life-altering decisions. Sen. Charles Whitmore of North Carolina must deal with the senseless shooting of school children during a re-election campaign. His faith has been shaken by the incident and his mission for his state has been altered. He is questioning everything he has done and everything he has believed in for his entire life, and this comes just at the point when his state election looms dark and heavy and imminent. His wife, Sara, is an encouraging, deeply convinced Southerner who believes in what she learned as a child, and she herself has never quite escaped childhood except through excessive drinking. His campaign manager, a New York Jewish woman named Alex Klein, wants him to hold a hard line on things, but Charles is unsure and he is unwinding before their eyes.

That is the premise of this very intriguing play. It is a deadly comedy, or perhaps a hilarious tragedy. At any rate, it is a very human play with very real people. For New Englanders, it is a glimpse into the mindset of Southerners in the hands of Northerners. It is the sort of play that takes careful handling and perfect acting to succeed. Berkshire Theatre Group has secured the foundation of its theater with strong interpretive actors who can pull this sort of play together and make convincing points without pedantic prattle.

Keira Naughton as the campaign manager and Judy Jerome as the wife succeed where others might not. They are two sides of a battered coin, the kind that, when flipped, always comes up heads and never tails. Each woman gets to be heads for a while, but neither one ever stays tails for very long. Watching and listening to this constant reversal of positions makes the play fascinating.

Naughton is the rigid, formal, never-complacent professional as Alex, seriously proud of her heritage and her abilities. Alex, the backbone of the campaign, is flexible enough to accommodate the needy moments of her candidate and his wife but, like a good backbone, she remains steadfast and upright in her vision and her work. When she joins Sara in a seriously silly moment, the woman behind the professional is glimpsed, but Naughton understands the need for restraint and we only see what she allows us to see and never gives us room for supposition. This is one of her finest interpretations of a character and one not to be missed by any serious theatergoer. 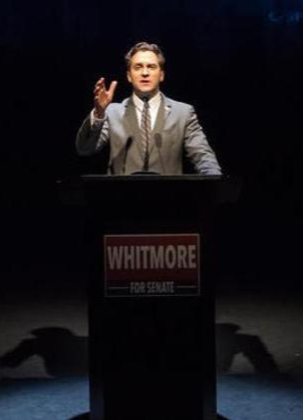 Andy Talen plays several roles, but it is his gofer, Tom, who makes the strongest mark for this actor. He is hyperactive and alert and both funny and sad at the same time as Tom hopes to make his mark as a helper, although he never quite understands exactly who he is in the world he works in on this campaign. While the women in the play are either strong walls or slippery figures, Talen’s work allows him to be, quite literally, all things to all people: He is the Everyman that this script requires in order to broaden our view of the world onstage.

Sen. Whitmore is played by Graham Rowat. Charles Whitmore is the center around which the rest of this world revolves. It is his emotional reaction to situations that force the issues of the play onto the stage and into our consciousness. Rowat faces the challenge of being all things to all these other people all of the time. He plays faithfulness, oddity, despair, grim reality and outstanding hope all at the same time. He is exactly what we assume our representatives are and will continue to be, even though we only see usually one or two aspects of these men and women who work to control our destiny and that of our country. In this play we mostly see the backstage workings of this man, and Rowat allows all of his realities to pour out onto the floor, the couch, the table and the podium. His wife and his manager cannot pick up the mess around him — only Charles can do that — and it is Rowat’s wonderful effort to do so that makes this show as compelling an issue-driven play as it is.

His final speech, accompanied by the tally of a vote in the Chamber, is a riveting five minutes that you will not easily forget. Although I found Rowat’s voice sometimes a bit shrill and difficult, his performance on the whole is remarkable and effective.

David L. Arsenault’s set is simple and straightforward and represents the spaces involved perfectly while David Muren’s costumes are real and right. Alex Hill’s projections and video design enhance the play. Jennifer Scapetis-Tyler’s dialect coaching has given Jerome and Rowat and Talen the perfect verbal qualities for their characters.

Charlotte Cohn, the director, has been involved with the play from the beginning: She is the wife of the author. She has brought the play to life with the tools enumerated above, technical and human alike, and put a slice of dramatic reality on the stage in this intimate theater space. All in all it is a job well done, worthy of a closer look. Its issues are valid and of daily interest and should be explored in this kind of depth as often as we can have that happen.

Church & State plays on the Larry Vaber Stage at the Unicorn Theatre, 6 East St., Stockbridge, Massachusetts, through Saturday, June 30. For information and tickets, see the Berkshire Edge calendar, go to www.berkshiretheatregroup.org or call the box office at (413) 997-4444.