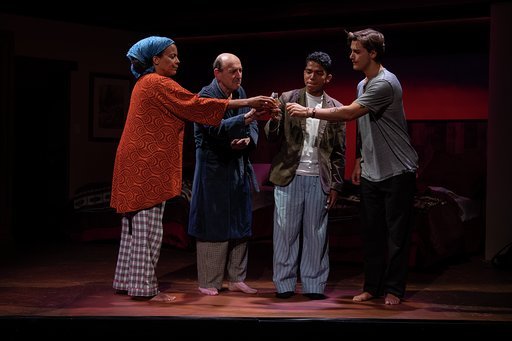 Curve of Departure
By Rachel Bonds
Directed by Keira Naughton

“Never get old. Everything inside you turns to liquid and then tries to come out of you.”

This is the sort of play we need more of right now. It deals with universal concepts and universal moments in the lives of 21st-century families, families that are expanding the meaning of the word “family.” It is a play that cries out for attention, that pees and poops out appeals for help, that salivates over relationships and screams out reality and a demand for understanding. It is a sweet play about love and love’s demands. It’s the kind of play that brings me close in touch with my soul, my heartbreaks and my joys.

The play closes the summer season at the Chester Theatre, a company that puts on plays because they are meaningful and not because they will be popular or bring in money. At Sunday’s matinee the theater was sold out, and it deserved to be full because they were adding a new play to the regional repertoire, one that does what good theater is supposed to do.

Linda has brought her father-in-law, Rudy, to a hotel in New Mexico in preparation for his son’s funeral. The dead man was also her husband, the father of her son, Felix, who also shows up in the hotel room along with Jackson, his husband. They are a modern family becoming an increasingly complex group. There are new complications for the two younger men: A child has come into their lives at an inopportune moment. Life, already difficult, has been made almost impossible for young Felix, who wants a relationship, not a family, but this is all about family, so family in the larger sense, the smaller sense and the current sense is what this play is all about.

Black, Jewish, mixed race, WASP: They’re all here in this play forming a unit, a single unit known as a family. It’s today and today’s family is unique, accepting and just as difficult as family has ever been.

Keira Naughton has directed a beautiful company of players in this unique work, and they actually do feel like a family. Watching this play is guaranteed to touch your emotions, touch your heart and soul, make you laugh, cry, want to reach out to the characters on stage, comfort them, embrace them, get into the toast they do, not to their dead but to one another and their future. That future is a troubled one.

Rudy, falling apart physically, wants to die and he wants Linda to assist him. Linda doesn’t want to help Rudy out of this world, though she will help him get through it. Jackson wants to adopt his niece, who is deeply disturbed though very young. Felix wants his time with Jackson to be their time, time to develop their own relationship physically, spiritually. Stuck together for this one night, the foursome are forging their own interfamily responsibilities. It is a tough time and a beautiful one, too.

Ami Brabson is remarkable. Strong and steady in her actions, she plays a woman for whom staying on track is essential and impossible because she can be sidelined by other people’s needs. Linda’s life has been difficult, her marriage unsatisfactory, though she loved the man while she could. Brabson brings all of these elements into her performance and nothing is ever forced or untrue in her work. She brings Linda to vibrant life from beginning to end.

Paul Pontrelli as her son is deeply, honestly human and real. His Felix is troubled by the unanticipated turns in his life: death, marriage, adoption issues he cannot face. Pontrelli expresses without visible passion everything that bothers him and somehow he makes each question into the only question while he deals with it. He transforms a complex situation into many simple ones that don’t impinge on the others. He has a unique capability, wiping away issues until they are the issue to deal with. Perhaps this is in the writing by Rachel Bonds, or perhaps it is a transformation that director Naughton has brought about. Whichever it is, Pontrelli makes it work quietly and poignantly.

Raye Birk is in a single-minded role as the family elder. Rudy has physical problems that are emblematic of his family’s individual psychological problems. His character with sudden physical needs that overwhelm him is perfectly realized. He plays through diarrhea and constipation and the unexpressive need to cry. Instead he cries out with the pain of impossible longing. The author gives him the longest speeches and he gives her back the passion that makes this play so exceptional.

Jackson, the newby, is played by Jose Espinosa. His good looks and lilting voice add the lightness to the play that keeps things real. He is clearly of interest to all three members of the family, but he is not as yet fully involved. This fact alone makes him both the perfect confidante and the perfect outsider. All three of the others relate to him on this “outsider” level and he becomes increasingly important to each of them. But it is his intimacy with Pontrelli’s Felix that spikes the difficulty in the play. His honesty in the role is special and natural and helps to steer the emotional aspects of the play.

Physically the production is perfect, with a very honest set design by Juliana von Haubrich, natural and understandable costumes by Stella Schwartz and excellent mood-intensive lighting by Matthew Adelson. Filled with small details, the play ultimately moved the full-house audience to tears and sighs of relief, but I won’t say which aspects caused which reaction. For that you need to experience this play for yourself—and you should.

Curve of Departure plays at the Chester Theatre, Chester Town Hall, 15 Middlefield Road, Chester, Massachusetts, through Sunday, Aug. 18. For information and tickets, see the Berkshire Edge calendar, call the box office at (413) 354-7770 or go to chestertheatre.org.