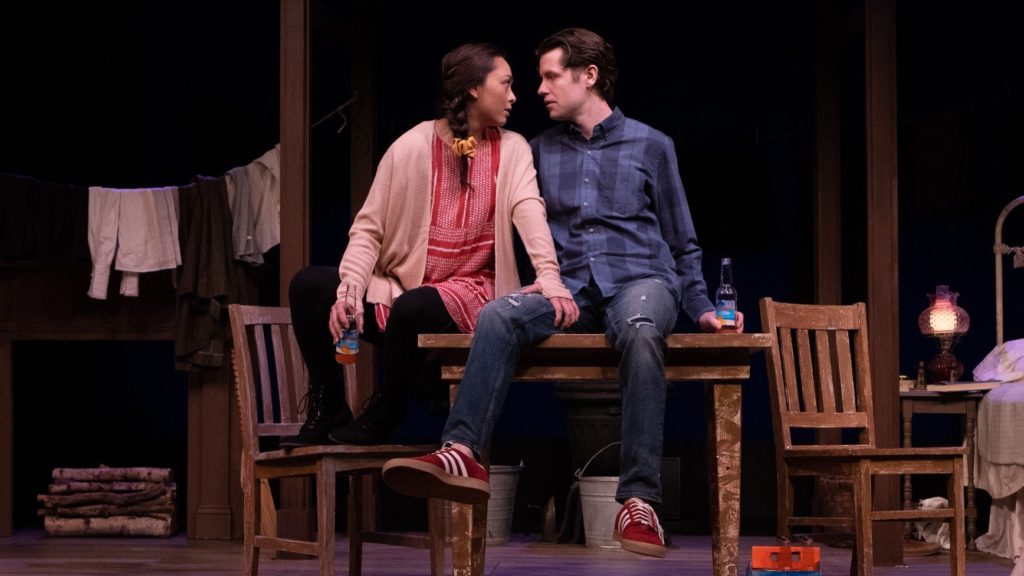 Andrew Greto
Lilli Hokama and Luke Hofmaier in the Chester Theatre Company production of 'Now Circa Then.'

Now Circa Then
By Carly Mensch
Directed by Sean Christopher Lewis

“Are you kidding? I judged you, too.”

The nature of acting and its importance in our lives is at the center of the play “Now Circa Then,” enjoying its regional premiere by the Chester Theatre Company. While the two characters, Gideon and Margie, are not really actors, they have each—for different reasons—accepted work as re-enactors at a historic house museum celebrating the immigrant experience in New York City’s Lower East Side in the 1880s–90s. They each play one half of an eastern European couple, newly married through an arranged relationship prior to leaving their homeland for America. Considering what this country is going through now about immigrants and their rights, this is a very timely, very “now” sort of play that cannot fail to touch most of its potential audience, many of whom are descended from couples like these.

Margie is a newly arrived Midwesterner who finds New York to be not quite what she expected. Gideon is a more sophisticated Easterner who understands his world and appreciates it for what it provides him. He is not at all pleased to find his new historic re-enactor partner to be so out of step with the work they do. They each relate to the other with a wariness that is as amusing as it is crippling. She just doesn’t get what it is they are hired to do; she considers herself a tour guide and doesn’t initially cotton to speaking in a dialect and format that isn’t her own Ohioan. She plays Josephine, a presumably Jewish woman from Romania or somewhere like that; he plays Julian, her new husband. He is often commanding and demanding with her, and she is assumed to be subservient to him, something she finds impossible to be. Watching her learn her improvised role is part of the humor of this play, but it is also part of the horror of it for today’s audiences. 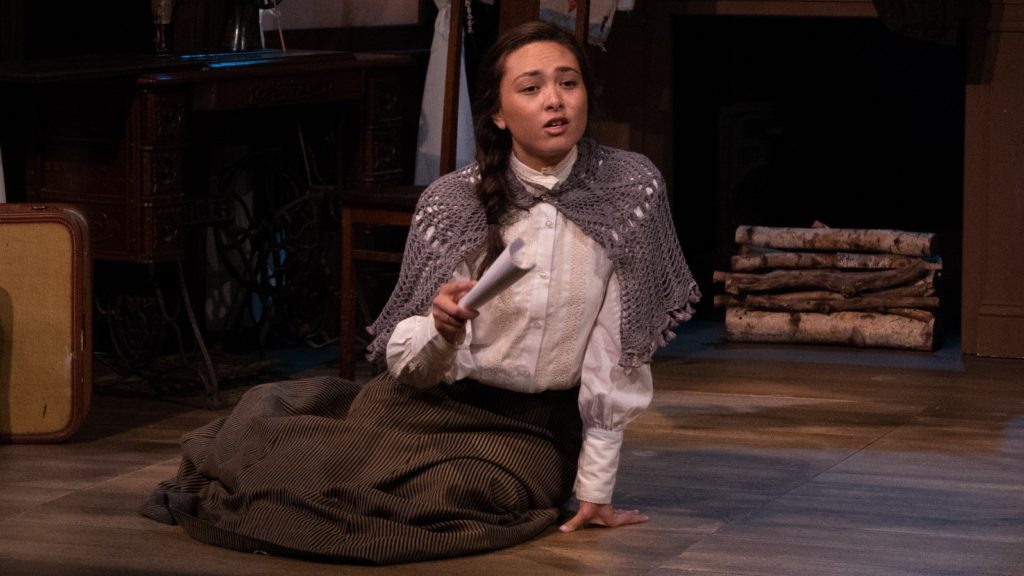 Lilli Hokama in the Chester Theatre Company production of ‘Now Circa Then.’ Photo: Andrew Greto

Gradually, with coaching from Gideon, Margie gets into the role of the discontented 19th-century bride. Lilli Hokama plays Margie beautifully, her insistent disdain for the job apparent with every word, every gesture. She admits to taking the job as the only work she could get and is sharp about her dislike for the whole idea of acting. She is basically friendless in the city and totally unprepared for the challenges ahead of her.

As Josephine, Margie is initially inept, not understanding the world she has been tasked to represent. Hokama is adept at playing this dichotomy and is very amusing in showing Margie’s attempt to adapt. When the inevitable occurs and her own life becomes intertwined with her character’s life, the outcome is highly predictable. The first act draws to a conclusion with Margie and Gideon inextricably involved on both levels. Predicable as it was, I couldn’t have liked it more, a case of what else, and why not.

For his part, Luke Hofmaier has adopted a personality geared to turn off just about any potential partner he might meet. Gideon is a nearly pompous ass who believes his work as an historic interpreter is among the most important jobs in the world. He is extremely serious about this work and is not averse to telling his new partner just how awful she is, how inappropriate she is for the job. He is also critical about her attire, her personality and her style. He is a judgmental prig who feels it is his duty to make her comply with the daily routine that is his “calling.” 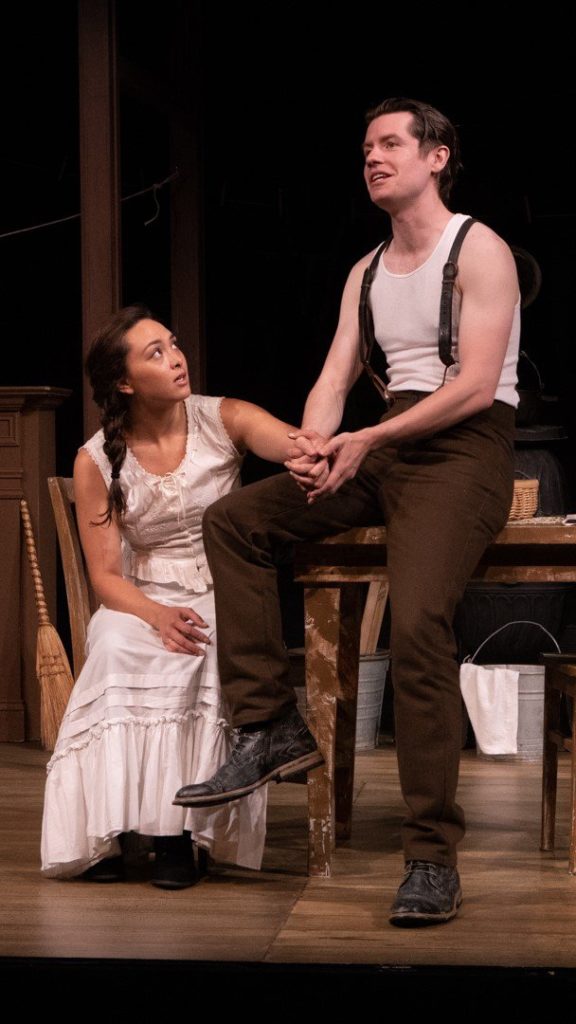 Lilli Hokama and Luke Hofmaier in the Chester Theatre Company production of ‘Now Circa Then.’ Photo: Andrew Greto

Gideon’s interpretation of Julian, the European he portrays in the Lower East Side ghetto life of the museum, is just as outrageous and funny. He slaps his bride on her rump whenever it suits him. He is filled with expectations about her work as the wife, both her daily chores and her nightly ones. He is almost delicately censorious of her thoughts and, as Gideon, he is almost as overwhelming as he is as Julian. It is instantly clear that this improvisational partnership is not expected to last.

So when she shows interest in him personally, it is not without an alarming sense of surprise that he reacts in exactly the way you would expect: Gideon falls for Margie hook, line and sinker. From this point onward, the play’s double presentation becomes funnier, more dangerous and more specific about the nature of relationships in a world that is discouraging them more and more frequently. It is the battle of these four personalities for dominance that takes this simple plot into uncharted waters.

Costumes by Heather Crocker Aulenback help keep this play in solid condition even when the players are confusing us with their personality shifts. The complex set showing us three-plus rooms in the tenement museum that also substitute for Gideon’s own apartment for some moments at a time was designed by David Towlun. Lara Dubin’s lighting is atmospheric and works well for the play.

Sean Christopher Lewis has directed and guided his cast of two for maximum effect. The humor hiding the tragedy of these two relationships is extraordinary. He keeps us aware at all times that his two actors are playing two actors playing two people who may never have existed except in some historian’s imagination. Talent triumphs in this dizzying double existence, and the play succeeds to amuse us even as the inevitable creeps onto the stage while we watch. Chester Theatre Company has a definite hit on its hands with this play within a play.

Now Circa Then plays at Chester Theatre, located in the Chester Town Hall, 15 Middlefield Road, Chester, Massachusetts, through Sunday, July 14. For information and tickets, see the Berkshire Edge calendar, call the box office at (413) 354-7770 or go to www.chestertheatre.org.

— Napoleon Bonaparte
Read next: Bits & Bytes: Free Fun Friday at the Mahaiwe; ‘Tales of Europe’ film fest; Barrington Stage battle of the bands; ‘So This Is My Family’ reading; BCC dean’s list