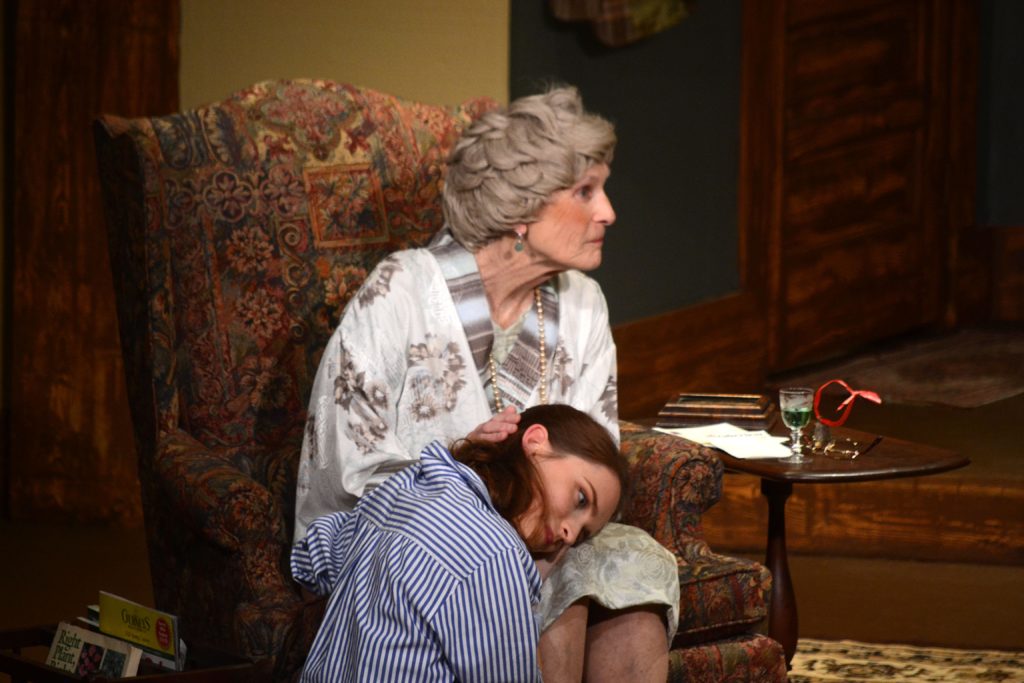 Cindy Smith
Wendy Power Spielmann as Mrs. St. Maugham and Elisheva Malfatto as Laurel in the Ghent Playhouse production of 'The Chalk Garden.'

THEATRE REVIEW: Cast of Ghent Playhouse’s ‘The Chalk Garden’ lives up to the standards set by their predecessors

The Chalk Garden
By Enid Bagnold
Directed by Cathy Lee-Visscher

“Love can be had any day; success comes harder.”

Mrs. St. Maugham is a generous woman except when it comes to her own daughter, and her daughter’s daughter, Laurel, a fraught 12-year-old who lights fires for her personal enjoyment, and benefits from grandma’s generosity and indulgence. So does her manservant Maitland, an ex-con who is the most trusted man in the old lady’s life. When she decides to hire a companion for the child, she hires one Miss Madrigal, who brings no references, provides no history, and exudes an almost pompous knowledge of soil and plants and the requirements of both. This all takes place in Enid Bagnold’s 1955 comedy “The Chalk Garden,” now on stage at the Ghent Playhouse in Ghent, New York. Originally the 1955 Broadway production starred Gladys Cooper, Siobhan McKenna, Besty Von Furstenburg and Marian Seldes while the 1964 movie starred John and Hayley Mills, Deborah Kerr and Dame Edith Evans. The cast in Ghent lives up to the standards set by their predecessors.

The formidable and commanding presence of Mrs. St. Maugham is illuminated by Wendy Power Spielmann, who adds one more exceptional interpretation to her growing list of definitive performances. Slender as a rail and physically unthreatening, when she is in a discussion with Madrigal or Maitland, she holds the room without question. Spielmann gives us the LADY of the house at all times, and even when her character is temporarily confounded, we can see her reckoning with her native right to command. She never loses control for more than a minute or so. She is the center of all things hers and nothing, not even the death of her beloved butler, can shake her firm foundation. 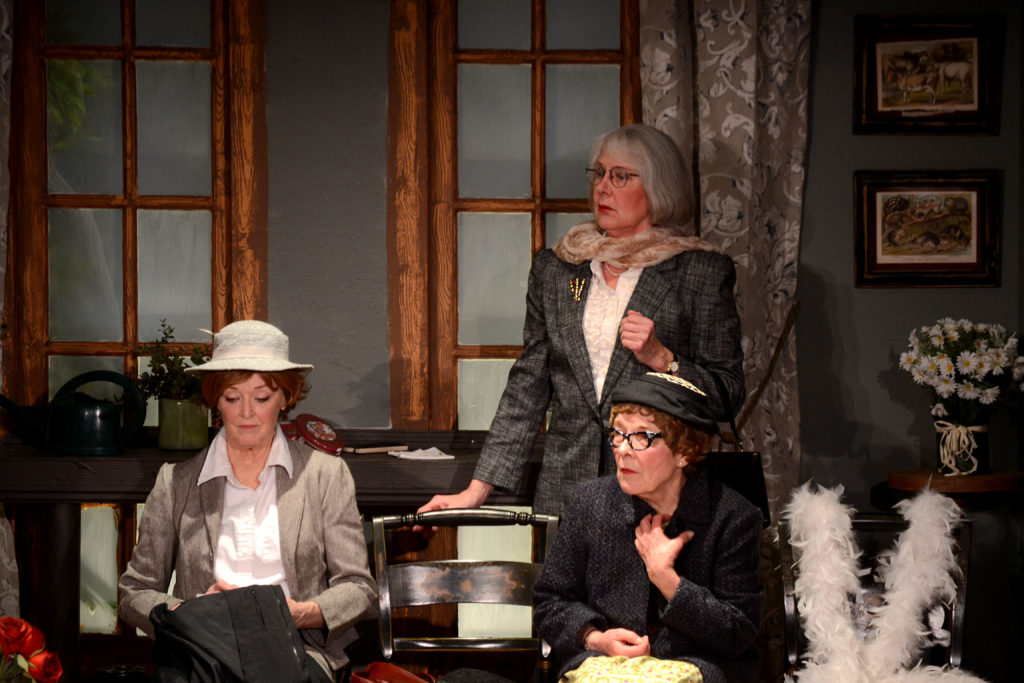 Spielmann has some real competition from the other women in the production. In a small role, Joanne Maurer steals the stage twice with her scattered woman applying for the job. She applies a loud stage whisper in her scene and then adds an hysterically funny double exit, which got a nice laugh on opening night.

As Madrigal, who gets the job, Sally McCarthy seems to almost perfectly inhabit her role of a strong-willed, determined woman without qualifications but with a deep, dark secret to protect. In this country-house setting, she anticipates no threat to her well-being, but with Laurel and Maitland observing her every move and Mrs. St. Maugham’s exalted friendships, she is constantly under threat. McCarthy, in a much more controlled and realistic role than she normally plays on the Ghent stage, is enthralling and even chilling at times. Madrigal has knowledge that outclasses her employer when it comes to plants and gardening, and she displays a practical point of view in dealing with a dangerous child that is amazing. By the time the play reaches its necessary conclusion, we, the audience, can feel how perfect is the fit for these two highly different women. What McCarthy brings to the Ghent stage this time around is a realistic reassurance and a solid base for this play. 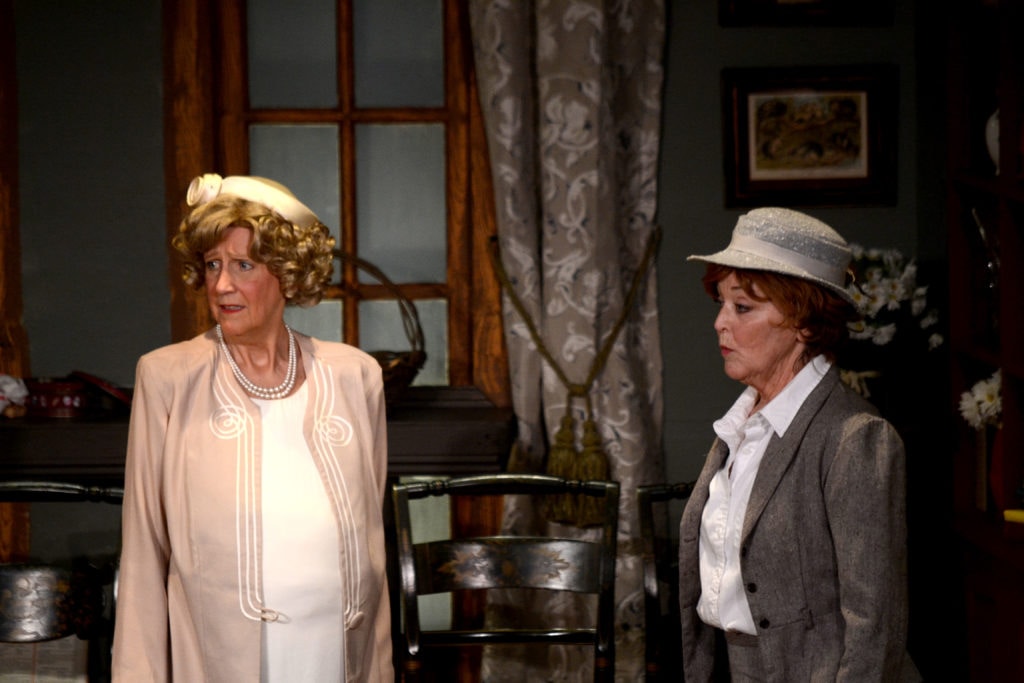 Cathy Lee-Visscher as Olivia and Sally McCarthy as Miss Madrigal in the Ghent Playhouse production of ‘The Chalk Garden.’ Photo: Cindy Smith

The middle generation of the St. Maugham family is played by Cathy Lee-Visscher. There is a steady bond between Laurel and her grandmother in the remarried mother/daughter character Lee-Visscher plays. Though she only has three brief scenes, we understand quickly that Olivia and her mother are not equals in strength, and yet Olivia is not under mother’s controlling thumb and can hold her own in life-effecting arguments. The pictures of loveliness in relationships are clearly presented by the actress and Olivia’s desire to reclaim her child is movingly sincere. This is one role for which Lee-Visscher is just perfectly cast and she has an impact not to be sneezed at.

She has also directed the play. Her vision of Bagnold’s text and characters is right on. She and her fellow players are crisp and British, and even when the accents may be questionable, the impact is not. Each character, from “Third Applicant” to “Nurse,” is individual and defined. Characters’ reactions to the never-seen dying butler upstairs are exactly right and, in turn, define the man on the house phone. The director has been gifted a perfect set designed by Sam Reilly, outstanding costumes created by Joanne Maurer, Joe Sicotte’s perfect lighting and absolutely fine sound design by Monk Schane-Lydon. This team, assisted by Kelly Maurer on props and excellent stage management by Arielle Lant, gives us excellent theater. That’s a certain plus this time around. 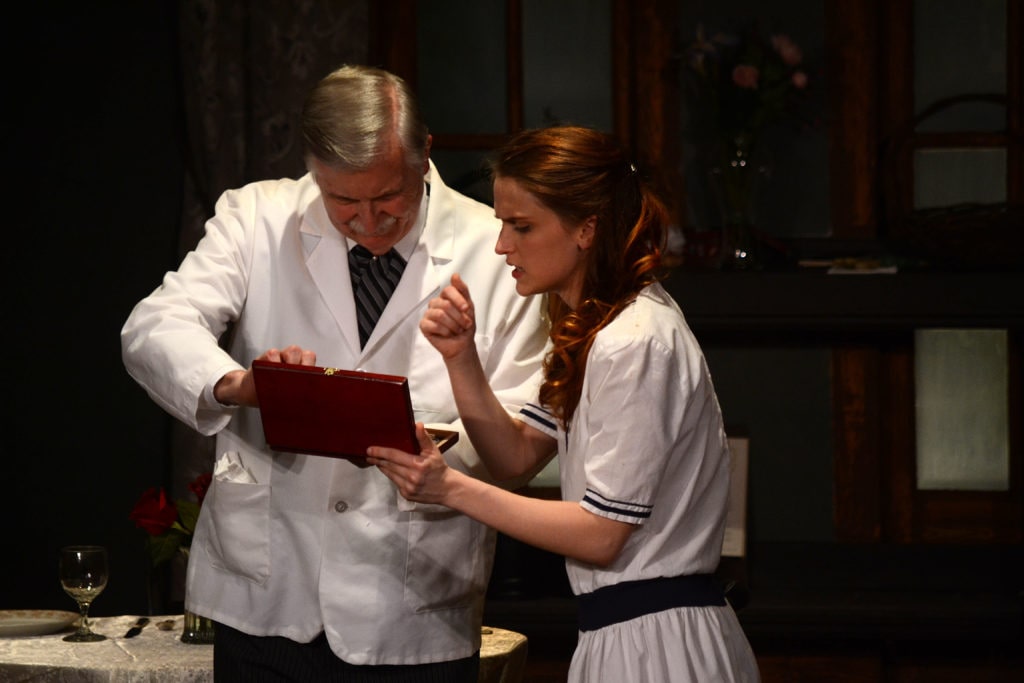 Steve King as Maitland and Elisheva Malfatto as Laurel in the Ghent Playhouse production of ‘The Chalk Garden.’ Photo: Cindy Smith

Laurel is played by Elisheva Malfatto, who is visibly too old but emotionally just right. This actress plays the youthful person without being cloying or fake and she takes the role to new heights. A disturbed child, she instinctively knows who to trust and Malfatto uses that quality of Laurel to excellent effect. Once the play moved forward into its plot, there was never a question about the actress, only about the character, and that is a tribute to both the woman playing her and the woman directing her.

Steve King as her friend Maitland added yet another dimension to the play. He takes on the misfit in the menagerie perfectly. 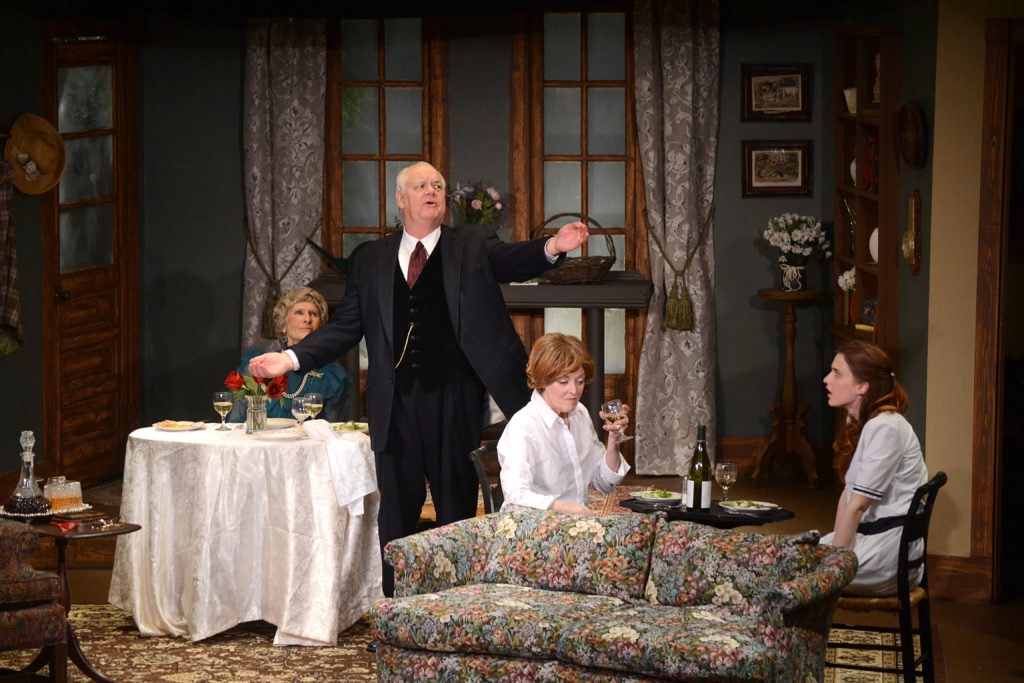 Rounding out the occupants of this grand room in Sussex are the butler’s resident nurse and Mrs. St. Maugham’s old friend, the Judge. Jewel Winant plays the nervous nurse and does a fine job, always intrusive and always upsetting. As the Judge who might easily destroy this nearly perfect world created by the matriarch, George Filieau delivers a nicely founded performance. He plays with assurance and just the right amount of sangfroid. His presence in this role adds immeasurably to the honesty of Lee-Visscher’s vision for the play. He may be balding, but you can actually envision the judicial wig on his head.

This is one of the finest shows to appear on the Ghent stage and absolutely a must see for anyone who enjoys, or would like to experience, classic late-20th-century situational comedy. This is no laugh-riot Neil Simon piece but a human drama that leaves you feeling light-hearted and, frankly, glad to be alive.