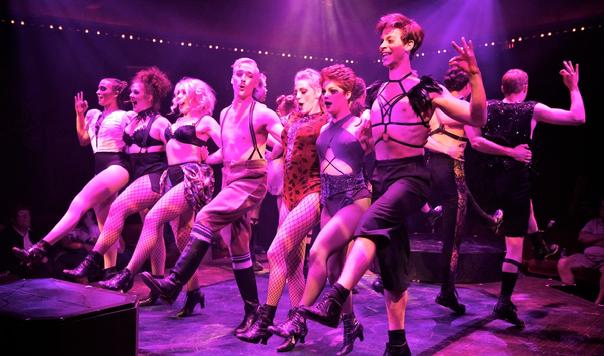 Pat Moran, center, and company in the Act Two kickline of the Mac-Haydn Theatre production of 'Cabaret.' Photo: Sarah Kozma

Cabaret
Book by Joe Masteroff, based on the play “I Am a Camera” by John Van Druten and stories by Christopher Isherwood
Lyrics by Fred Ebb
Music by John Kander
Choreographed by Sebastiani Romagnolo
Directed by John Saunders

“What would you do if you were me?”

Fraulein Schneider in Kander and Ebb’s first big hit musical asks a question in the second act that resonates, through the years since “Cabaret” first appeared on Broadway in 1966, like a ticking bomb: “What would you do?” At the time, the answer seemed obvious; after all, the play was about the effect of the beginning of the Nazi regime in Berlin in 1931. “Get out! Get out now,” your brain screams. But you know that most of the characters in this play cannot get out, that they are trapped by the circumstances under which they have chosen to live. Over the years between then and now, it has also become clear that we are trapped in a world we cannot escape, and so the stories told in this excellent musical have taken on a patina of current politics and the situation we face each morning when we turn on the news. Seeing this current production at the Mac-Haydn Theatre in Chatham, New York, drives this home overwhelmingly. Luckily, the show is very entertaining; otherwise, new, stronger levels of depression could set in and take control.

An extremely talented company has brought this 52-year-old play about the rising struggles in Europe 87 years ago to life once again in what can only be described as a brilliant production. Director John Saunders and choreographer Sebastiani Romagnolo have taken their cast to the extremes of reason, infused them with musical expressivity and dramatic clarity, and left us to witness how willful individuals destroy what is good without even realizing what they’ve done. Since I was 20, I have adored Sally Bowles, the heroine of this show, and pitied her for her senseless and idiotic, infantile decisions. Now, thanks to this edition, I feel only disgust at her ridiculous stupidity, obviously preferring the fate of her former roommate Elsie from Chelsea to a future with love and hope in it only because that choice would not bring her the selfish satisfaction of making an impact on those left behind.

Emily Kron, last year’s winner of Outstanding Performance by an Actress in a Musical at the Berkshire Theatre Awards, plays Sally. She wears wig designer Kira Williams’ black pageboy wig that makes her a doppelganger for actress Louise Brooks, an icon of the period. She wears clothing two sizes too large, taking on the look of a woman whose weight loss was sudden and probably related to a sexually passed illness. She wears harsh makeup and pretends it makes her pretty. She is the Sally Bowles over-the-top egoist in every way and, when she sings, she sings magnificently oddly, her own terrific voice shoved aside for the character’s voice. Kron makes us pray for Sally but never sympathize with her mistaken choices. Her performance as Sally is revolutionary for me and will forever make it impossible to love this waif when pity is all she deserves.

As Cliff Bradshaw, her unwitting accomplice in dreaming, Dakota Dutcher plays a man struggling to understand himself, who, long before coming to a realistic grip on the facts of his life, finds himself overwhelmed by Sally Bowles and her needs. Dutcher is wonderful, wandering through the morass of moral malfeasance that surrounds him. We follow him throughout the story and empathize with his problems both professional and personal. He is also, in this production, pre-haunted by the world around him, long before understanding what world he has gotten into. Dutcher takes Cliff in and out of mouths of lions and, like his friend, Sally, this Cliff is not able to get off the path once taken. Director Saunders doesn’t let him get on the train out of Berlin as other productions have done. His final exit, very much different from the original final exit, is in the direction of destruction and self-destruction, and its indecisiveness is one more directorial step into the emotional abyss that surrounds the plateau of the play.

That plateau called Berlin is being chipped away piece by piece in this show. Cliff can see it, its structure weakening, but he is powerless, unable to convince any others that his view is honest and real. His best friend in Germany, Ernst Ludwig, played to perfection by Nathaniel Dollquist, turns out to be a Nazi. Cliff’s neighbor, Herr Schultz, the greengrocer, played with open-faced belief by Fred Frabotta, depicts the truest aspects of perfect love thwarted by someone else’s reality. His ladylove, Fraulein Schneider, is embodied in Liz Gurland’s fine, bitter performance that tears away at your heart. Unable to resolve her issues, she asks that important second-act question above.

Cabaret’s central figure is the Emcee, never named and rarely addressed by the other characters. He is rather like a classic circus ringmaster who snaps a whip and sets up an act, sometimes becoming that act, sometimes executing an act that affects the mental state of the other principals. Played by Pat Moran, his entire bearing is self-consuming and the final images of him are devastating. This edition verbally returns him to the show’s beginnings while many of the interim versions have allowed him to bring the show to completion. Here, in a devastating moment, all things are left uncertain, certainly unfinished and undefined. The company, under the brilliant concept and execution of that plan by the director and choreographer in only two weeks of rehearsals, delivers a very entertaining, nearly three-hour speedway of a show. The circular stage holds a very large company costumed to decadent perfection by Angela Carstensen in a surround set design that smacks of Berlin designed by Erin Kiernan, and all of it lit to absolute perfection by Andrew Gmoser.

What amazes me most is the high-quality work this company has managed while performing in another lengthy and difficult show. For example, the superb acrobatics performed by Troy Lingelbach as the Emcee’s epic beloved are amazing. John Saunders has come to this musical with a vision and his company has delivered it in spades. He and Romagnolo are the new team to beat in this musical world, and I mean that with all due respect to others who work so very well together. This team has delivered something very special here. I realize that I have used so many superlatives that I am starting to sound like a 16-year-old girl with crush on her teacher, but that is because this company has left me with that very feeling. Every producer in the region should see this production while they can. In it they will find talent and taste and inspiration. In it they may find future employees and individuals who would enhance their own work and visions.

I am often asked the question “Why do you go to see shows you’ve already seen elsewhere?” My answer can be found above. In all the “Cabaret” productions I have seen, I have never seen one that delivers so much of what lies underneath the surface, that brings forward the subtext and makes me cry, suddenly more aware of what the daily news truly means to my life and our future. Sally Bowles, the Emcee, Fraulein Schneider and Herr Schultz in the Mac-Haydn production will keep me ever-attentive to the shifts in our current world. The music will keep me invigorated, especially as played by the pit band in Chatham, New York. They were great. I was grateful. Still, what stays behind is the question “What would you do?” Thanks to this production, I can only say for sure “I don’t know” and maybe “I don’t care much.” But, still, I think I do.

Cabaret plays at the Mac-Haydn Theatre, 1925 Route 203 in Chatham, New York, through Sunday, July 1. For information and tickets, see the Berkshire Edge calendar, go online to www.machaydntheatre.org or call the box office at (518) 392-9292.