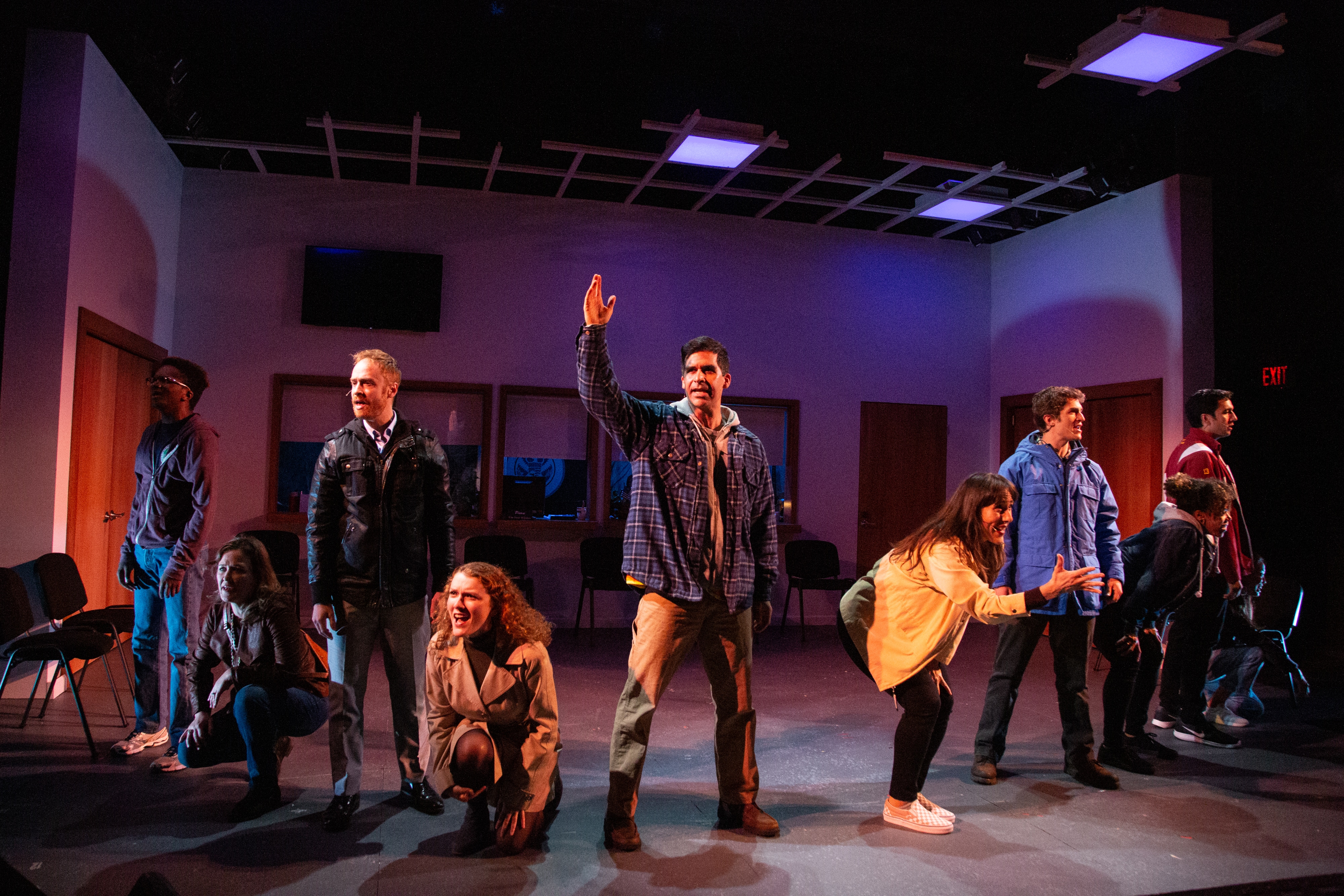 The cast of the Berkshire Theatre Group production of 'Working: A Musical.' Photo: Emma K. Rothenberg-Ware

“Unless you have losers, you can’t have winners.”

The musical saga of the working people of the United States is the story of America itself: It is a show that has lived a long life, suffered, improved, suffered again and come up a winner. It is that “winner” edition that now graces the Unicorn Theatre stage at the Berkshire Theatre Group’s Stockbridge campus. Since its creation in 1978 when it flopped on Broadway (36 performances total), it has undergone a series of revisions, rewrites and productions culminating in a much better Broadway run in 2012.

This show is better termed a “revuesical” as it moves from character to character in song, scene or monologue, never returning to its characters for a second look. Instead, for one hour and 46 minutes, the show just ambles through the workforce of the Union, from menial workers to executives to housewives to call girls. The 10 players work as a chorus, as individual characters and as symbols of what identifies the American worker, union organizer and even marginally a politician. In the age of Trump, this is a very justified moment of pause to reflect on what really makes America great—with music.

Everyone doubles in this show. Early in the play, Katie Birenboim represents the unsatisfied Project Manager, who moves from one position to another, sometimes respected, sometimes abused. She displays the elegance of human nature, accepting what she gets from each job she undertakes. Only one of her several roles, Birenboim brings a deep sense of humanity to all of her characters, a trait she shares with the other women in the company, and with the men, as well, for this is an equal-opportunity-employment show.

At one point in the show, Erica Dorfler plays Maggie Holmes, the last in a long line of cleaning women. She sings Micki Grant’s song about this sort of work, and her determination not to see her own daughter in this job is heart-breaking.

Jaygee Macapugay is the perfect student in a classroom scene at one point in the show and a high-school dropout call girl in another number. Working 20 minutes for $500, she revels in the joys of simple sex. In all her appearances, Macapugay is a lovely addition to this excellent cast.

Rob Morrison is one of the standout performers in this show, playing the corporate executive and the stonemason among other roles. He is a very dynamic actor and a very good singer. He knows how to wring laughter out of pathos.

Deven Kolluri is a very credible Raj Chadha, doing his best to stay calm on the phone with a client in another country and as Utkarsh Trujillo, who strives to make each day a “Very Good Day,” a new song for the show by Lin-Manuel Miranda.

The theater in its program has not made it clear who has written which songs or sketches, so if you need to know, you have to go online and look up the show and its many revisions, just as I did. This is an oversight on the part of Berkshire Theatre Group.

Farah Alvin as 40-year-plus teacher Rose Hoffman is an inspiration and a deterrent to the profession of teacher in Mary Rodgers and Susan Birkenhead’s song “Nobody Tells Me How.” She laments the loss of the way things worked when she began teaching and the current loss of student attention in the 21st century. Alvin has a wonderful scene as Kate Rushton, a full-time housewife. She performs Craig Carnelia’s wonderful number about this unsung profession in a most winning manner, accompanied by several similar women and the occasional man doing the same work.

From the beginning to the end of the show, Denis Lambert exhibits terrific talent as a singer and as an actor. In his many roles, he displays versatility, excellent character development and an acute interpretive skill. He does a sensitive job with Stephen Schwartz’s song “Fathers and Sons” and James Taylor’s “Millwork” along with Julie Foldesi, who is great in this number.

There are no soft moments in this show, which moves along from character to character, job to job, wish to wish without pause. If you need any proof that there is a worker’s God, it would seem likely that collaboration of all the contributors to this show could comprise such an all-knowing being.

James Barry has melded his cast into an amazing amalgam of American humanity. He moves them, along with props and furniture, through the lives of our country’s unsung heroes: the working class. One character, a happy fireman, talks about his earlier life as a policeman. There is no need for anything but the actor and his hat to make this a poignant moment in the show, especially in light of the 9/11 disaster when both professions played such vital roles. Barry gives us stage pictures of his people, like snapshots from an old-fashioned camera. His work with choreographer Ashley DeLane Burger is seamless, which is lovely as her angular formations and body contortions never jar with Barry’s simpler, more structural people.

Casey Reed does a nice job with the music, which occasionally borders on the too intrusively loud. Nicholas Hussong’s set and projections are both simple and complex, just like the show’s topic. Asta Bennie Hostetter’s costumes are always appropriate and Oliver Wason’s lighting was excellent and appropriate. Nathan Leigh, sound designer, needs to better balance the voices and the musicians.

Though I hadn’t been anticipating much from a 1978 flop show, I had a wonderful time with this production and definitely appreciated its multiple messages so very appropriate to our times. The show’s opening with its quotes from Emma Lazarus’ famous poem about the “homeless, tempest tossed” set me up for the ideal look at a modern America and it never let me down.