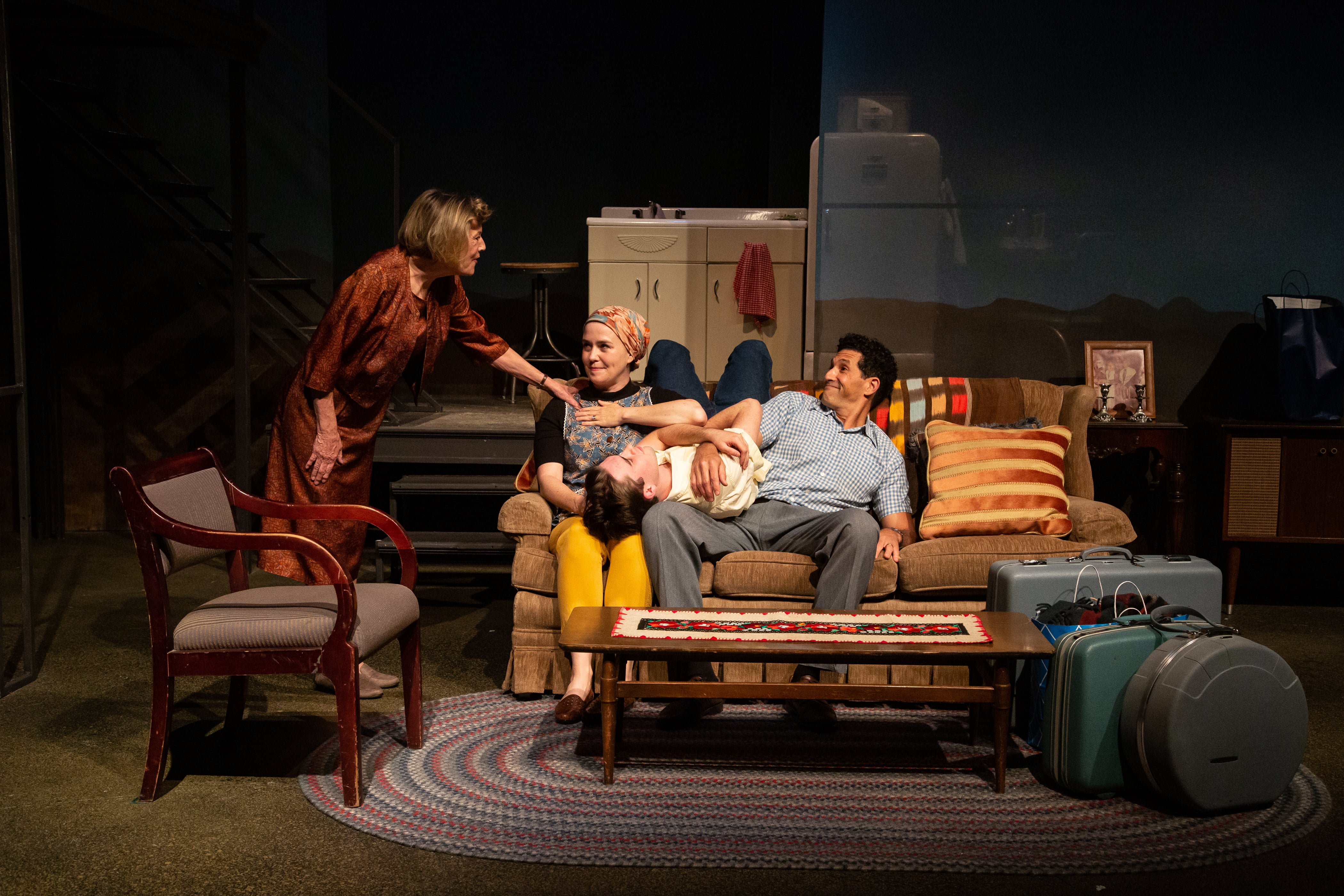 By the time Rachel utters those words, it is already hard to control your own emotions. She has been trying to come to grips with a reality about her life and her future, and is finally losing her honest and human emotions. She has reached the point where confronting God isn’t enough; she has reached the point of making demands and finding them effective only for herself even without answering her own questions. The playwright has been quoted as saying that he wants to deal with questions and leave his audience only with questions, no answers. In this key moment in the drama, he has reached that exact point in his play, now onstage at the Unicorn Theatre on the Berkshire Theatre Festival property in Stockbridge, part of the larger Berkshire Theatre Group. It is one of those moments that bring audience members to tears in this melodrama worthy of daytime television and beyond. While, ultimately, there is wonderful theater on the stage, there is always, here, a television soap opera in the works set in the heyday of such fare: the late 1950s.

Rachel has cancer. Her husband, Dave, has the strength to deal with his wife’s moods, changes and all that comes with a terminal illness. Their 12-and-a-half-year-old son, Nathan, has his humor and his determination to pursue his bar mitzvah in a town where his family is the only household of Jews. Dave and Rachel’s longtime baby-sitting aunt Sarah has her own convictions and they almost rescue the ailing Rachel. These are the people in this soap opera. Devoted Aunt Sarah sways her Jewish niece over to overt Christian Science and nearly destroys this tightknit family in the process, and right there is where the soap disappears and the drama takes hold. Directed by the author, this play moves from the overly theatrical first act into the honestly realistic second act where tears don’t manifest as easily as do other emotional reactions.

At the center of the action in this play is its narrator/character Nathan, who is telling the story of his mother’s failure of faith and her ultimate resolution of her troubles through her own personal faith. The memory of a youngster is questionable yet undeniably accurate until he self-corrects. Local actor Logan Weibrecht does a wonderful job with this role, making Nathan totally believable. When his riddling becomes a silencer against the truth, it moves from a nice humorous bit into a desperate act of an immature mind quickly aging with understanding. The young actor plays with a steady grip of reality that gives the play much resonance, from his frustration with his Jewish training to his loss of freedom as circumstances force him to grow up before his time. His powerful final speech, recounting the family histories until our own time, is wonderfully offered after his final terrifying scene with Rachel.

The married couple, Dave and Rachel, are played by Benim Foster and Emily Donahoe. They are almost ideal together, his height and his strong arms perfect to hold her, to lift her and carry her. His voice is dark and rich; hers is lilting and sweet with a dark connection when she needs it. Twice in the play, the final scene in Act 1 and the opening scene in Act 2, she mixes her emotional states with her reasoning to reach into Dave’s soul and in doing so, she reaches down into ours. Donahoe is an exceptional actress with the power to sway us hypnotically within her high-energy charge, as she does in her speech that reflects the play’s title.

A very honest actor, Benim Foster is easily overlooked in the role of Dave. He has powerful moments, beautifully executed, but the role cannot match that of Nathan or Rachel. In supporting them so well, he is the stagehold loser.

Foster’s finest scenes, however, are not with either of them, but rather with Robert Zukerman as the visiting rabbi come to teach Nathan his bar mitzvah portion, and later with Cynthia Mace as Aunt Sarah. In both scenes he emerges strong though emotionally rattled, a fabulous feat of acting. Zukerman is very believable and sincere in his role and, as always, totally the character as written. This actor can disappear into a character showing only what the author and director want. He does this especially well during his lengthy scene with Rachel trying to answer her questions about Judaism and God and to quell her doubts. When she totally loses it, his reaction is a masterpiece of acting.

Cynthia Mace, on the other hand, plays two characters in one: the devoted aunt, as religiously intent as a Jew; also the proselytizing zealot out to convert her niece to a final path toward death. Mace is chilling in both of Sarah’s ways. Her second self, unfortunately, doesn’t appear until Act 2, just in time to save the play from that melodramatic style. She is the theme song of the play, the character who staples the author’s message to the wall. It is a wonderful role for Mace, who carries it off superbly.

As his own director, Harelik shines it on, giving the play powerful images and great characters. I don’t know which function is his forte, but the combination makes for very good theater. The production is well-presented with an interesting, extended set by Randall Parsons; perfect period costumes by Hunter Kaczorowski; well-conceived lighting by Kim Smith; and wonderful sound design by Jeffrey Salerno — all of which makes this one of the best season closer plays of the year.

What the Jews Believe, produced in association with the American National Theatre, plays at the Unicorn Theatre, Route 7 in Stockbridge, Massachusetts, through Sunday, Oct. 20. For information and tickets, see the Berkshire Edge calendar, call the box office at 413-997-4444 or go to berkshiretheatregroup.org.