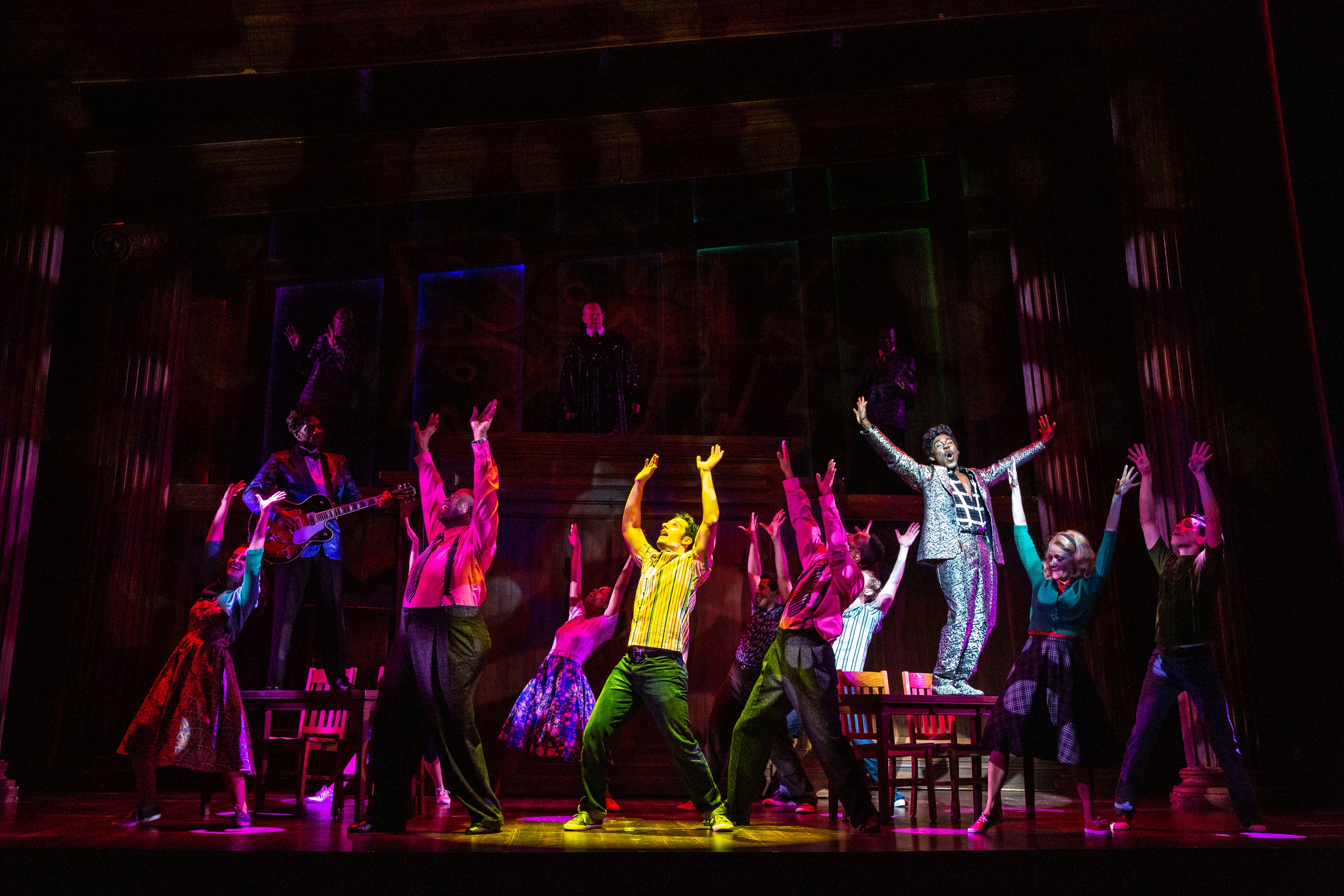 “Rock and roll is here to stay”

Back in the 1950s and 1960s when I was growing up, rock ‘n’ roll seemed to control just about everything. Like it or not, we walked in its rhythms; its melodies were hummed constantly; its lyrics infested every decision we made. The man responsible for bringing us all to something of a frenzied mob for music was Alan Freed, a disc jockey on the radio (WINS in New York City for me), and this new musical is his story, a story he made mine. And now, like it or not, its presence at the Colonial Theatre in Pittsfield, Massachusetts, is bringing it all back home again, everything from rhythm and blues to payola.

Production numbers and solos abound in this musical biography of the man who named the music “rock ‘n’ roll,” and stole his own children away from their best shot at having a family. Through his actions and his choices, he left one woman for another, revolutionized the radio and its usefulness to the entertainment industry, altered our perceptions and our hearing losses, and ended up a federal target in the payola case. It’s a lot of ground to cover in just one show and that’s without mentioning J. Edgar Hoover (George Wendt in an excellent performance) and a whole host of other characters, each of whom added to the cast of Freed’s cinematic life.

Freed made movies; produced live music events; hosted a marathon of radio shows; did early TV; married thrice; became a national treasure and a national threat; was an object of J. Edgar Hoover’s scrutiny; and created careers for the likes of Little Richard, Chuck Berry, LaVern Baker, Frankie Lymon, Bill Haley, Jerry Lee Lewis, and so many more artists and groups. He even ramped up interest in a New York phenom, a modern-day blind Viking named Moondog whose music got loads of airplay thanks to Freed. And thanks to his lawsuit for infringement against Freed, Moondog lived comfortably until his death in 1999 in Germany. Freed, whose life was always on the periphery of greatness, is played in this new musical by Alan Campbell, who is both good-looking and charming. He sings beautifully and he is a graceful man whose best acting quality seems to be his sincerity. Every word out of his mouth sounds genuine and well-meant. If a role can make a career, create a “star,” then Alan as Alan could be the one for this Tony-nominated actor.

A cast of 19 deliver at least 29 roles in the two-and-a-half hour show. Standouts include Richard Crandle as Little Richard. Crandle provides great music and much of the show’s comedic moments. George Wendt plays J. Edgar Hoover and, surprisingly, sings two numbers extremely well. James Scheider made an excellent Jerry Lee Lewis, the second time Lewis has been a character on the Berkshire Theatre Group stages. Whitney Bashor appears as Freed’s first wife and also as their daughter, an excellent job of doubling that seems to allow no confusion in characters.

Bob Ari plays two influential men in Freed’s life: his first partner in Cleveland and the Jewish gangster and owner of Birdland who elevates Freed’s stature and ultimately leads him to his downfall. Virginia Preston plays Jackie, the second wife, whom he meets as she teaches a cha-cha class at Arthur Murray.

Four men and a woman add immeasurably to the music and the reality of the story: Dr. Eric B. Turner, who plays Fats Domino (singing “I’m Walking”); A.J. Davis, Jerome Jackson and Early Clover sing the boy-group songs including “Sh-Boom,” “Sincerely,” “Yakety-Yak” and “Smoke Gets In Your Eyes,” along with backing up other singers. Their music alone would make the show a worthwhile evening, but they also stand with Valisia Lekae, who plays LaVern Baker, a singer whose dynamic personality shone through her voice and her smile. Lekae is brilliant as Baker. She herself shines through this extraordinary company.

As third wife Inga, Janet Dickinson is a standout. She also plays the minor role of Alan’s mother and gives a performance of many other colors.

This show was seen at the Bucks County Playhouse two years ago with Campbell and Wendt in their roles, and it is rumored will move on from here for a Broadway run. It is certainly worthy of the move.

The new, plot-oriented songs by Gary Kupper work well within the known hits from the era that Freed dominated. A lullaby was particularly evocative.

Production values run very high in this production with superb sets designed by Tim Mackabee, picture-perfect costumes created by Leon Dobkowski and fabulous lighting designed by Matthew Richards. Sound designer Nathan Leigh’s work is essential to this show and there was nary a glitch to be heard. Wigs and hair were in keeping with the period as created by J. Jarad Janas, and the visual elements that kept the show nearly magical—the video and projections—were co-created by Christopher Ash and Kevan Loney.

The choreography by Brian Reeder was wonderful, though nowhere near the period work of the Mac-Haydn Theatre’s Sebastiani Romagnolo, whose recent dances for “Grease” were stupendous.

Randal Myler’s stage direction brings this show its exemplary professional standing. Not a moment is missed in this work. Every character is perfectly defined and the stage pictures are both realistic and dramatic. His use of a turntable was outstanding and kept the show’s fluidity as musical as the score.

I liked this show very much and even though I admit to being influenced by this music at the time, it was never my music—though, as I write this review, my mind floats away in a haze of “Ain’t That a Shame” and “Why Do Fools Fall in Love.” At two in the morning, you can’t do much better than that.

Rock and Roll Man: The Alan Freed Story will blow you away at Berkshire Theatre Group’s Colonial Theater, 111 South St., Pittsfield, Massachusetts, through Sunday, July 21. For information and tickets, see the Berkshire Edge calendar, call the box office at (413) 997-4444 or go to berkshiretheatregroup.org.