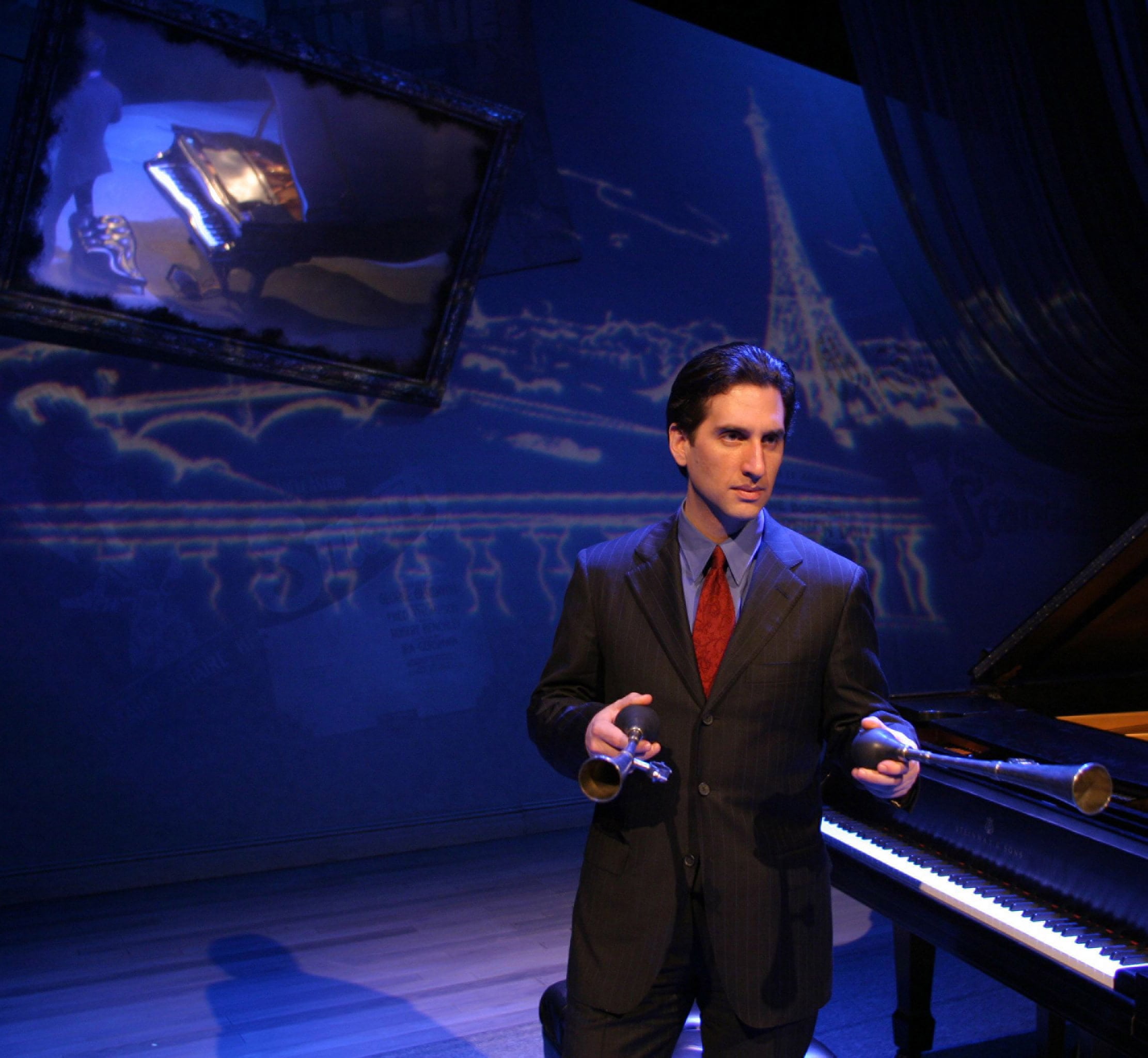 “Of course ‘An American in Paris’ was pedestrian … it’s a man walking through Paris.”

Usually a theatrical revue has at least three people, perhaps more, and perhaps a few chorines. Principally, an illustrated lecture has one speaker and possibly a living example of the subject matter. “George Gershwin Alone” falls into neither category, though it accomplishes the goals of both of the other cited examples of performance. Hershey Felder, the author of the script, is the sole performer on the large stage of the Colonial Theatre in Pittsfield, Massachusetts, part of the Berkshire Theatre Group. Mr. Felder more than fills the stage with his 90-minute impression of the composer of some of the greatest music produced in the United States in the 20th century. He narrates the life and the choices of Gershwin while playing a lot of wonderful music that is both professionally accurate and enjoyably entertaining. A few of the facts may be spurious or incomplete, but the total effect is of spending some time with the long-dead artist in an intimate setting, perhaps his New York apartment, while his well-known ego allows him to tell you his story in his own inimitable fashion.

Kitty Carlisle Hart, who reputedly dated Gershwin, told Felder that Gershwin’s only real goal was to be famous, and this seems highly likely. He was never alone, yet his personal life never accommodated others easily with the exception of his brother, Ira, who was his most frequent lyricist. Felder’s George talks about his infamous friendship with composer Kay Swift, who later abandoned him and married another man. He mentions the compulsive relationship with pianist Oscar Levant, who never abandoned Gershwin, but Felder never gives us details of their friendship. Others are barely touched on. George Gershwin is truly alone in this presentation.

This isn’t so much a biography but a rather unique privilege: a few minutes with the genius, during which he entertains with his compositions and his personal stories. It is an easy one-man show to sit through, for the music is divine and the personality is intriguing. Felder is quite amazing at the piano, playing in Gershwin’s own style, refashioning his music as he plays it.

Looking back on Gershwin today, it is impossible to grasp how the American music critics could have missed his genius and misinterpreted his work, calling it “pedestrian” and “unimportant” or “amateur”; how his opera “Porgy and Bess” could not succeed at its premiere. As Felder tells it, the ignorance of critics offended and confounded the composer, diminished him in his own eyes. He relates how Gershwin reacted through his work and performance skills, dominating parties at the piano with his own songs and concert pieces. Felder’s Gershwin never asks for sympathy, just time to expose his music. The object lesson here is to be this man, as he does, is to be the best public side of the man, the one we read about, hear about, know about. That he never interprets the hidden side is a shame, for it is clear he has studied the man and could justify any interpretation he might have conceived.

His pianistics is what makes the show a crazily authentic experience. He is facile, romantic when needed, in charge of the jazzy elements of Gershwin’s choices. He plays the Gershwin the way we read about Gershwin playing: improvising on his own works, recreating them for a close-up audience of admirers. This is just an enjoyable time, followed, post bows, with a give and take with the audience that stretches the show out to two hours as he encourages a sing-along, a Q&A session, and allows the audience to prompt additional information. Michael T. Gilliam, the lighting designer, whose work engages us as well, encourages the intimacy with the audience that Felder seems to enjoy. All in all, this is a rare evening of “authentic” entertainment — not a revue, not a lecture, but an entertainment of a type we rarely get to see.