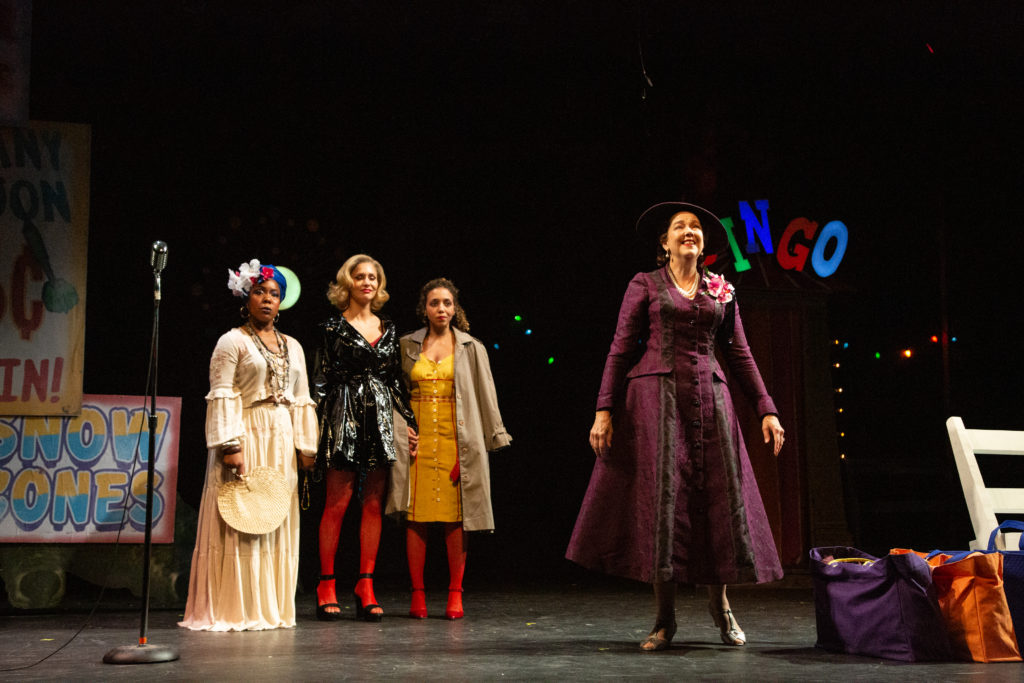 “How can you make a world for people to live in unless you’ve first put order in yourself?”

We get by, just barely, by the skin of our teeth; this refers, usually, to a narrow escape from disaster. The phrase comes from the Old Testament book of Job, in which Job is subjected to horrible trials by Satan, to be relieved finally and at the very last minute by God. Throughout Thornton Wilder’s 1942 play, the Antrobus family and their servant, Sabina, live just such a lifestyle, constantly troubled and barely surviving to literally fight another day. Written on the brink of the U.S. entry into World War II, it spoke to its audience at the time, and today it has another chance to rear back on its heals and speak to another generation living day to day by “The Skin of Our Teeth.”

In the opening monologue, the maid, Sabina, declares that everything is at sixes and sevens. It truly is: The master’s not home yet, children Henry and Gladys are misbehaving, and Mrs. Antrobus is at her wits’ end. It is not a good time. “Sixes and sevens” is used to express a situation of uncertainty or confusion. To be in complete disarray, a state of confusion or bewilderment, it is the perfect phrase to indicate how things are going in Thornton Wilder’s play and in the world outside the theater, as well. World War II is looming and all of its awkward situations are coming to a head.

Written two years earlier as war was waging in Europe and America was struggling out of the Great Depression, it foresaw a world at war and resolving it amicably even though the Antrobuses son “is the enemy,” a veritable Cain willing to slay his own brother and even his own father if necessary. When it finally opened Nov. 18, 1942, we were only three weeks from entering the war. Art often imitates life, but in this case, life was following art and leaving audiences breathless. 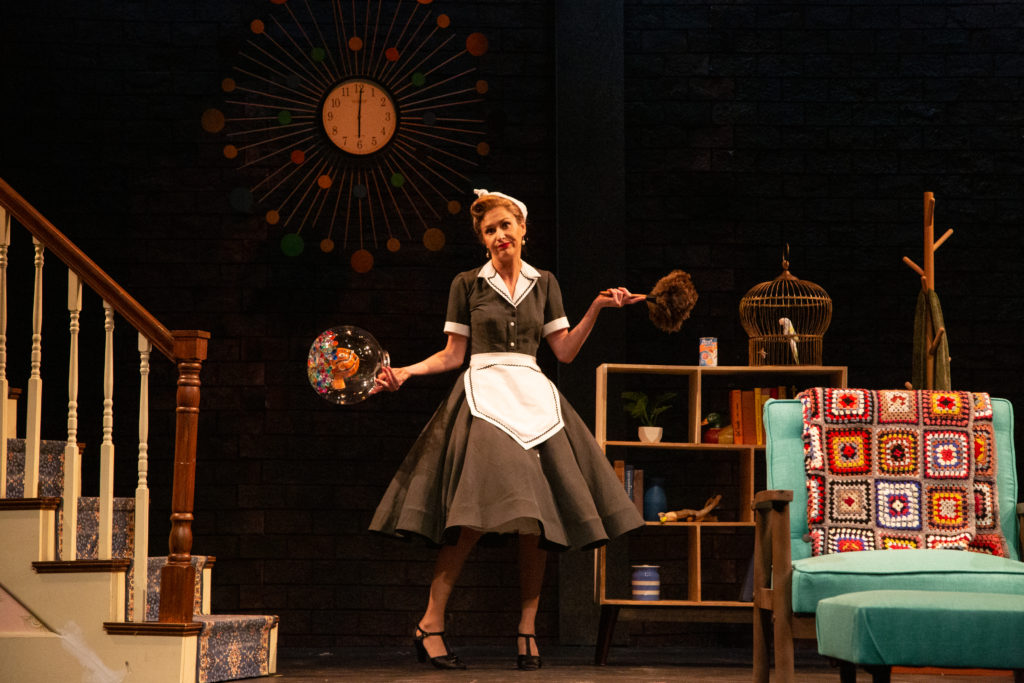 Ariana Venturi as Sabina in the Berkshire Theatre Group production of ‘The Skin of Our Teeth.’ Photo: Emma K. Rothenberg-Ware.

The play is a comedy but the laughs are bittersweet and the play went on to win the Pulitzer Prize in Drama (Wilder’s second; he won a third for his novel “The Bridge at San Luis Rey”). This remarkable play is now on stage at the Berkshire Theatre Group’s Fitzpatrick Main Stage in Stockbridge, Massachusetts.

Ariana Venturi plays a harried and hurried housemaid who is more an indentured servant than a willing one (her name comes from the Sabine women who were captured in wartime and forced to serve their captors; and her first name, Lily, is taken from the Biblical Lilith, whose wayward ways our maid replicates). She is fond of the man she works for, is less enamored with his wife and finds their children peculiar. She is absolutely right in her assessment of the Antrobus family members. Venturi, in the role that accidentally restored Tallulah Bankhead to Broadway acclaim and later brought dramatic chops to Mary Martin, is a delight. She sets the tone for the play, one in which the stage manager addresses us now and then, and the actors are all self-consciously acting their roles for us, and she maintains that picturesque control throughout. 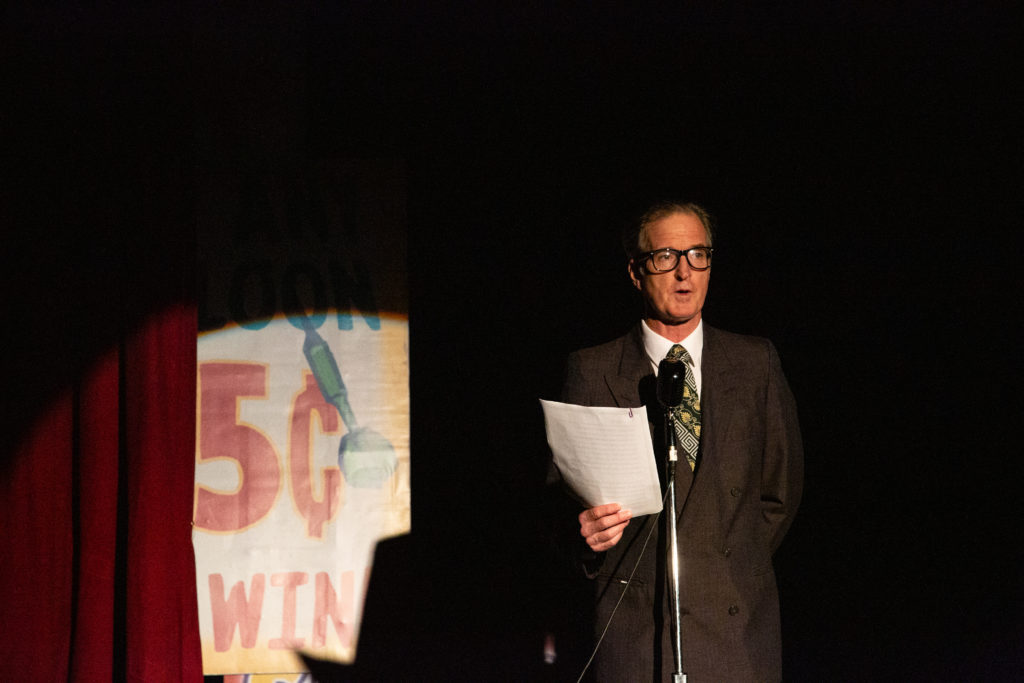 Matt Sullivan as the Stage Manager in the Berkshire Theatre Group production of ‘The Skin of Our Teeth.’ Photo: Emma K. Rothenberg-Ware.

Matt Sullivan’s character opens the play and later on becomes the hustling, bossy, irritable backstage professional trying to keep his show together for a final third act. He does a nice job in this quirky role, not the gentlemanly soul of Wilder’s “Our Town” at all, but a whole lot more realistic in a very unrealistic setting. He is one of several “crew” who become part of the onstage action when necessary, and among the others is Ralph Petillo, playing an understudy who is called onto the stage to replace a sick actor but who barely gets to say a word or two. For that final sequence seen in a hysterically silly rehearsal and finally in performance, Wilder cleverly mixes philosophies and religious concepts into his play in this bit, ideas and thoughts that reflect his own classical instincts and also illuminate his philosophy on the world order.

The opposite of all of this is Mrs. Antrobus, played by a wonderful Harriet Harris, who can make any spoken line an important one. In this play she presents a very sensitive woman who loves unconditionally, manages her societal duties respectfully but with an edge predicting the political woman of the 1960s and later, and who seems capable of surviving even a 5,000-year-old marriage she has never completely understood. It is a wonderful performance, the equal of the Helen Hayes creation I remember so well and, no doubt, that of the role’s creator, Florence Eldridge, whose work always dripped sensitivity. 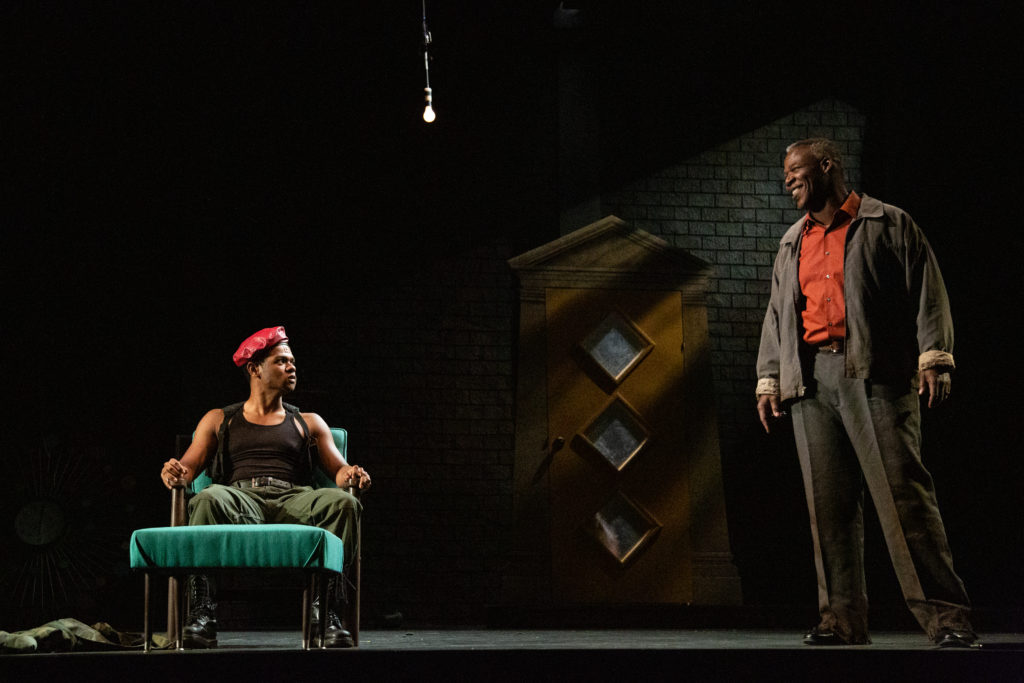 Marcus Gladney Jr. as Henry and Danny Johnson as Mr. Antrobus in the Berkshire Theatre Group production of ‘The Skin of Our Teeth.’ Photo: Emma K. Rothenberg-Ware.

The difficult relationship of father and son is well played by Danny Johnson as Mr. Antrobus and Marcus Gladney Jr. as his son, Henry, formerly Cain. Henry has killed his own brother, Abel, and has never really been forgiven by his dad. By the third act, he has morphed into a fascist and has alienated his entire family, though his mother is incapable of rejecting him. Gladney is terrific as Henry and Johnson’s bluster and braggadocio is ideal for the man whose last name is taken from the Greek word for “human” or “person”: anthropos. Both men have created very full and understandable characters. 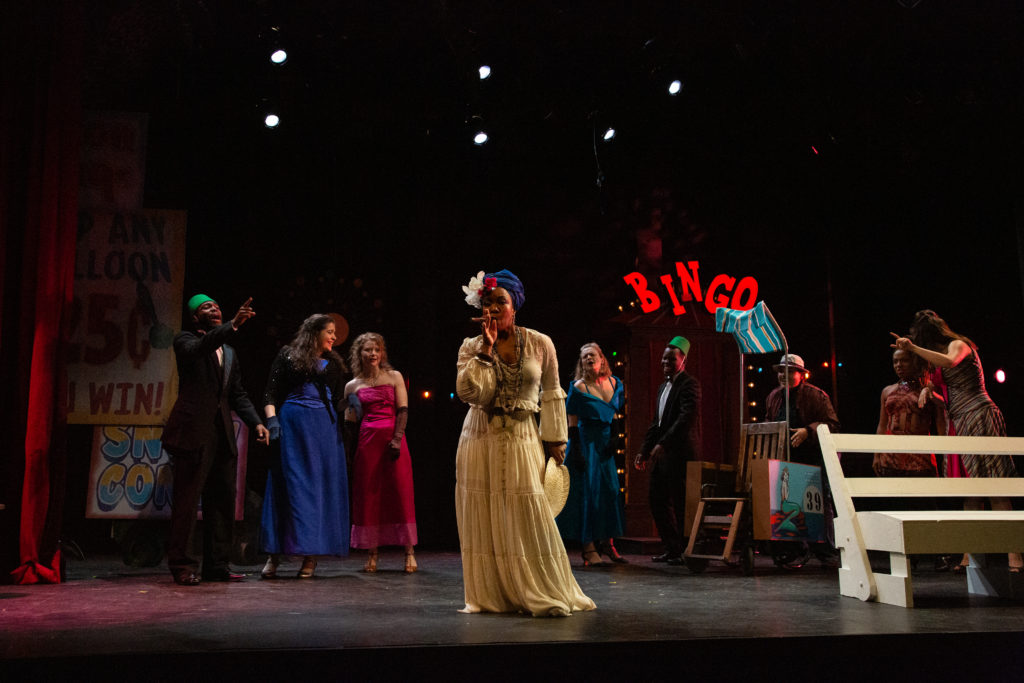 Lynnette R. Freeman and the cast of the Berkshire Theatre Group production of ‘The Skin of Our Teeth.’ Photo: Emma K. Rothenberg-Ware.

In a supporting role, previously undertaken by Marian Seldes and Florence Reed, Lynnette R. Freeman brings a Haitian accent to bear on the lines and it obscures them somewhat, which is too bad, for I have enjoyed this actress’ work in the past. Among her vital predictions on the Atlantic City boardwalk is a major flood, which the Antrobuses avoid through a “Noah’s ark” maneuver that perpetuates the author’s concept of a world that is inhabited by the same people who accomplish everything important in history, religion and mythology (Antrobus has invented the wheel, among other things).

Bill Clarke’s scenic design is theatrically sketchy and works very well, especially as lit by designer Daniel J. Kotlowitz. The 1942 costumes created by Hunter Kaczorowski are beautifully right for the play. Scott Killian’s sound work is, as usual, superb. Once again, J. Jared Janas has given us the right looks with his wigs and makeup.

David Auburn has done a fine job directing this wonderfully odd play, a longtime favorite of mine. He and his cast have brought forward all of the humor in Wilder’s script, and all of the character that makes this a very special look at human history and American’s part in creating the world we all now live in. I haven’t always liked his work as a director, but this is a job extremely well done and I happily applaud this stage triumph.

The Skin of Our Teeth continues on the Berkshire Theatre Group’s Fitzpatrick Main Stage on East Main Street in Stockbridge, Massachusetts, through Saturday, Aug. 3. For information and tickets, see the Berkshire Edge calendar, call the box office at (413) 997-4444 or go to www.berkshiretheatregroup.org.