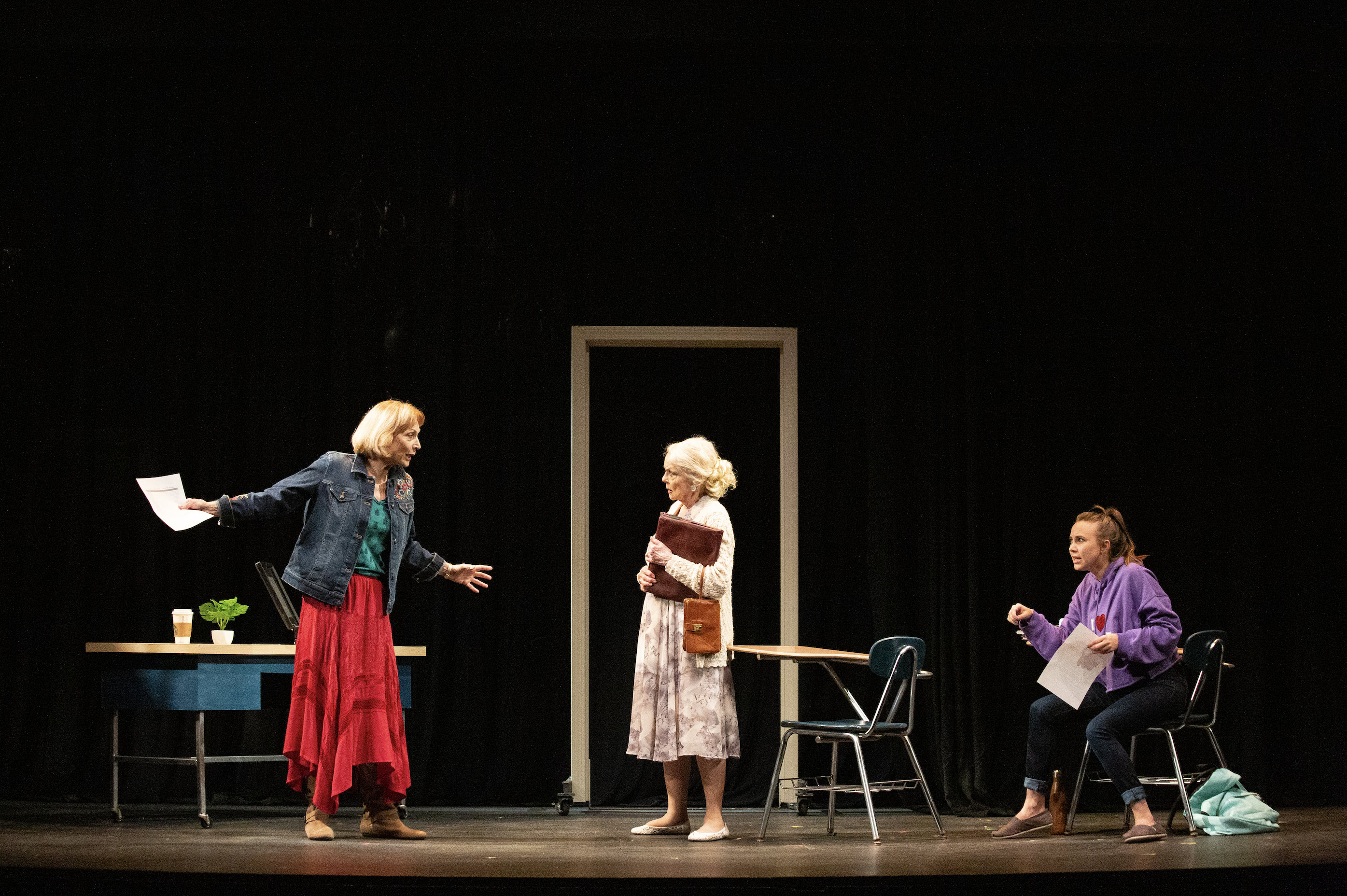 Dee Hoty as Joan, Penny Fuller as Lucinda and Samantha Hill as Summer in the Berkshire Theatre Group production of 'What We May Be.' Photo: Emma K. Rothenberg-Ware

What We May Be
By Kathleen Clark
Directed by Gregg Edelman

In this brand new play by Kathleen Clark the characters, nonstop, keep committing one peculiar error after another until it seems they can’t do anything more to destroy years-old relationships. They are all nonprofessional actors whose theater is being taken away from them in order to build apartment buildings. All of these people love the theater that has entertained their hometown and also been their creative home for decades. They include a local star, Lucinda Royal Scott (Penny Fuller in a tour de force role); her perpetual understudy and rival, Joan Stem (the remarkable Dee Hoty); the aging leading man Hal Polick (played by the excellent Count Stovall); and the board president, company director and leading man Glen Geer (the impressive and hilarious Carson Elrod). For their final presentation in the soon to be “missing” theater, they are presenting a collection of four short plays Lucinda has made both famous and cherished.

To be specific, this is unusual theater with actors we are accustomed to seeing in certain types of roles. We get a reversal of the usual images in this show and are psychologically stood on our heads as Clark’s characters try to justify their choices. For example, Elrod plays a man whose personal psychology is the star-turn, not the ensemble. Most of the times I have seen this actor, he has been a standout figure in a company that is always adjusting, turning, recreating itself. Here, he plays a man who is monomaniacally set upon self-aggrandizement. He is wonderful in the role, just not what a fan of his would anticipate from him. He is entertaining and humorous, but he is never funny in this play.

Penny Fuller’s Lucinda is aggressive, controlling and avoids the interpersonal until the show is over and the cast is tensed up, expecting her heavy criticism. How Lucinda approaches her fellows once again alters everyone’s understanding of the character Fuller plays, and she plays it with a dash of surprise and flash of approbation. Once again the character advances to a new place and Fuller is there with her.

It seems to me that this play takes more careful scrutiny than just one viewing can provide. I am not often caught at a lack of words, but in this case, it is not clear to me what or why this play is what it is. Even so, praise for it comes naturally. No one besides the playwright is at fault, and she has created a very slick, very straightforward piece of confusion.

Why Hal, the “leading man” for Lucinda, is written as he is makes no sense. He is unconcerned about the company’s future when everyone else seems to be, plain and simply and unexplained. Count Stovall does a very good job playing straight and complaint-free. Stovall is excellent as the actor but has very few opportunities in the plays themselves to make his place with the company a rational one. He is just there looking fit and handsome, if a bit long in the tooth.

His opposite is Summer Oliver, the ingénue, played by Samantha Hill. In one of the playlets, she is a star-crossed writing student who cannot make her teacher approve her work, or even teach her. It is unclear if the girl she plays is anything other than the girl she is. Hill plays the easy confusion of character very easily. That only aids the confusion.

On the other hand, Dee Hoty as Joan, Lucinda’s rival, is a younger, taller, more slender variation on the leading lady. Having seen her primarily in musicals before this, I am amazed to see that she has not aged a day in all this time and is still the dominant figure on the stage here and wherever the play has been set. She is a beautiful woman with poise, grace and a humorous way of playing vengeance and treachery.

As a teacher in one of the playlets, she is convincingly unconcerned about her students’ wishes and desires. The remarkable turnaround that character undergoes underlines Joan’s own transitions and as Hoty plays her, this is borne out in the final sequence of the play. If Fuller wasn’t in the play, Hoty would be its star and that is exactly how her character, Joan, regards Fuller’s Lucinda: the reality and the fiction playing to the same end, though through different channels.

Carla Duren plays Colleen Haran, an intelligent and sensible woman who knows how to make this theater company succeed after they lose their venue. She throws monkey wrenches at Glen and pushes Summer straight into Spring. Duren plays the easiest character to understand and she does it very well.

The production is beautifully designed, showing the stage and the backstage areas simultaneously on a set designed by Randall Parsons. Laurie Churba’s costumes are extremely appropriate for the characters, often adding an additional touch of the absurd. The lighting by Alan C. Edwards is the most normal aspect of the production. A curious simplicity emerges in the direction by Gregg Edelman, who brings a history of light comedy into the situation and allows us to rest a bit as the odd aspects of this play come to the fore.

The sound design by Scott Killian doesn’t really go far enough into the absurdity of the play, which might have helped in this case. It seems as though Edelman has ignored the comic possibilities of the absurd and plotted his show out to be something perhaps written by Eugene O’Neill or Arthur Miller. The characters, as they are, are played like normal human beings instead of as the curiosities of the world. In this play there is no, or perhaps just a little, honesty. These neighbors of ours are under attack by an advancing societal pressure and all they can do is hope for the kindness of our stranger nature. By the end it appears they may have gotten just that, but where, how and when is still up for grabs. At least they have Lillian Hellman’s best play to fall back on when the time comes, and if its up to Glen, Lucinda, Joan, Hal and Summer, at least, that time is just a few months away.

See the play and maybe you can explain it to me. I’d be grateful. Not that I don’t get it—or do I?

What We May Be plays on the Fitzpatrick Mainstage of the Berkshire Theatre Group, located at 6 East St., Stockbridge, Massachusetts, through Saturday, Aug. 31. For information and tickets, see the Berkshire Edge calendar, call the box office at (413) 997-4444 or go to berkshiretheatregroup.org.