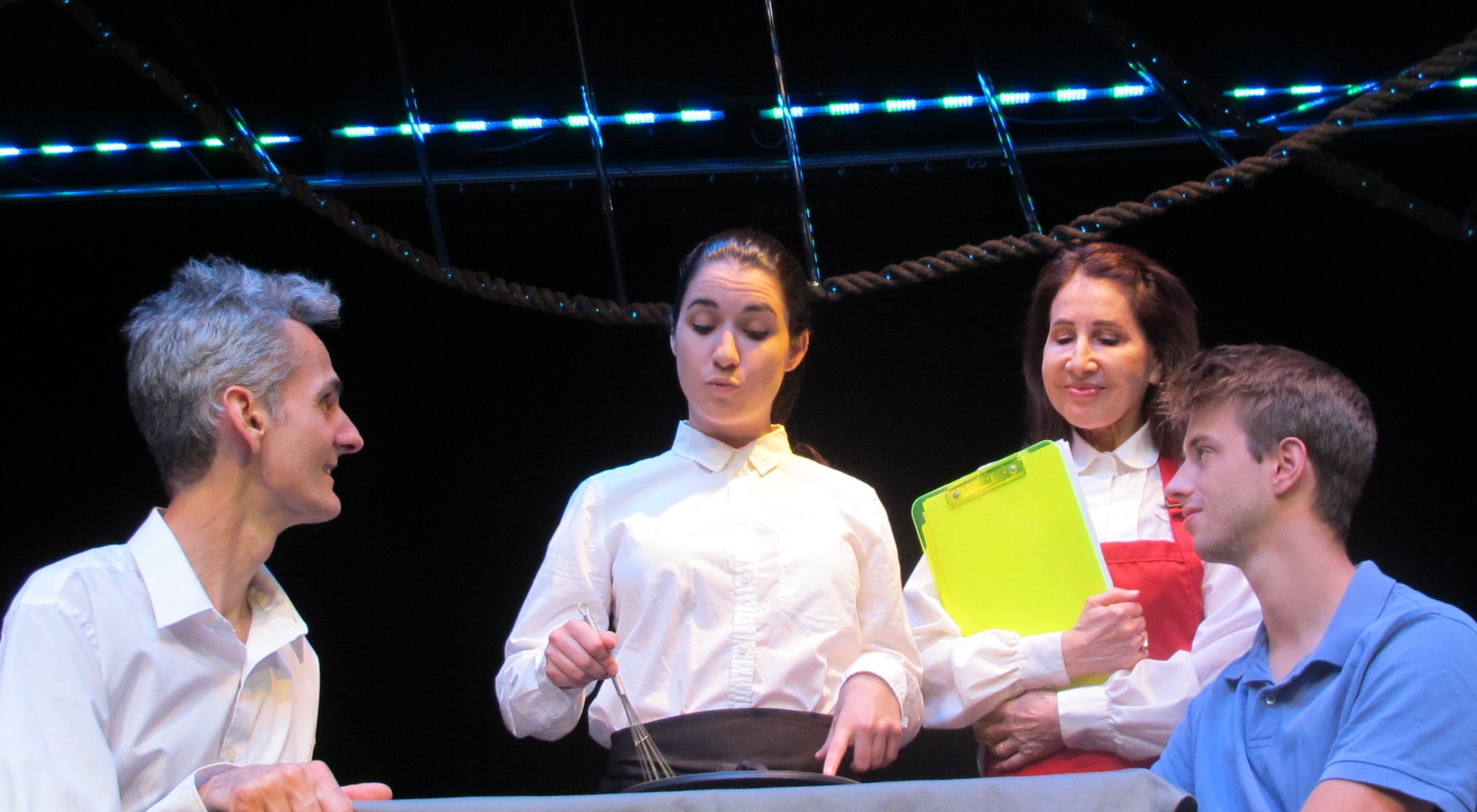 When a play asks more questions than it provides answers, leaving the audience with unresolved issues to take home, it can be extremely disconcerting. What, for example, is a “sun salutation,” an act taught the principal character by her already suspicious new employer? It is a way, apparently, to energize your body as you stretch and strengthen all of its major muscle groups (greetings, reaches and so on, or in yoga terms, surya namaskar). This is just one of the aforementioned questions and not the most important one. In Michelle Carter’s new play “Better,” having its world premiere at the Bridge Street Theatre in Catskill, New York, a myriad of questions are asked with very little information given about the questions themselves; and though the play examines the outcome of the background to those questions, the actual inquiries are rarely explained. Instead, we have a 20-year-old woman fighting to grasp the unusual circumstances that inform her life. It is her own secretive nature that masks the supposed truths, of which we know very little.

I like a play that leaves me curious; this one engendered an unusual amount of conversation on the 75-minute trip home — unusual for an 88-minute play. I’ve also read a lot about the facts of the case that inspired this new work. I have to applaud the author and the producers for what they have accomplished in this case.

Emily is the oldest of four children being raised by single parent Ben. His wife is gone from the scene, explicit in the script but not in the play itself. Mom has committed a heinous crime and she is out of the play except for her unheard remarks in telephone calls with Ben and in a letter we don’t hear, either, that she has sent to Emily. Emily is left struggling with her situation. She has lost her college funding. Her dad is more interested in his unspecific work and in protecting Emily from public humiliation than he is in her future aspirations. The other kids are never seen or heard from.

Emily’s energy, intelligence and her persistent curiosity about life, sex and fondue moves the play along swiftly as she matures, grows through experience and becomes a person she hopes is not too infested by her mother’s genes. As played by Montana Lampert Hoover, she is a very intriguing human being with perhaps a greater concept of humanity than any of her peers. For her, everything is a journey to another level of superiority. Her unassailable decisions affect others but she is never concerned about that, proving in so many ways that she is her mother’s child. Hoover plays this girl in blinders wonderfully, almost brilliantly. She, the actress, has totally embodied the woman she presents and in those few moments of the play when she is not at the center, she still draws us onto her path, forcing us to follow her reactions as well as her actions.

There are three women who affect Emily’s life and her decisions: her mother, her employer at the Melting Pot (fondue) restaurant, and a storefront medium named Molly. Molly is played with great effect by Lori Evans, an actress known in the region principally through her work at Shakespeare & Company in Lenox, Massachusetts. Her approach to this larger-than-life character is simple and honest. She takes her back to a simple reality: She is who she is. Late in the play, she is possessed by the spirit of a woman who might be Emily’s mother — there are some questions — and her delivery of that unanticipated reality is absolutely harrowing. A scene that could easily be over the top is, instead, a special sort of reality, honestly played and riveting from beginning to end. I believed every second of it.

Like so many sequences in the play, the set and lights — including special effects — designed by artistic director John Sowle make a world of difference by making a different world of the setting. Throughout the play his attention to imagery is sure and sensational. He gives the production another sense of journey surrounding Hoover’s personal voyage of discovery as Emily. The term “magical realism” rears its head in this work and that is a combination of Carter’s writing, Sowle’s design and the actors’ interpretations.

Michael, Emily’s lab partner and boyfriend, is handsomely portrayed by Eric Fleising, who delivers teen-male innocence brilliantly. He is never forced or forceful, his attempts at being supportive to Emily’s needs amusing and touching at the same time. When he appears at the restaurant on her first day at work, he gives us the supplicant that is his basic character and when, later on, she beds him, the inherent virginity of both characters play out marvelously in his face and shoulders, his voice and his movement. The oddities of the Kama Sutra provide a wonderful glimpse into the innocence he portrays as Michael. Later, his reactions to the clinical and scientific reactions of his girlfriend and her decisions about their lives are truly touching even if his verbal utterings are minimally presented by the author.

The other male in the company, Emily’s father, Ben, is Brian Linden, an actor whose physical appearance marks Ben as an early 1980s intellectual who could have been romantically manipulated into taking on tasks actually violating his own moral code. Here I partially fall back on my subsequent reading about the true case that inspired this play. In my research there was very little about their children, but the parents’ lives are heavily explored: suspicion of politically motivated pipe bombing, for example. Linden plays with a particularly difficult attitude, caring in words but not in actions. His non-interpersonal relationship with his daughter marks Ben as an emotional outcast and his telephone chat with his “missing” wife brands him as an introverted intellectual. This play, being Emily’s story, abandons her only in Linden’s solo scenes, but how we hear him and see him in those isolated moments give us more information about Emily than any other scenes in the play manage to do. I really loved these moments played by Linden; they made the play play.

An almost constant presence, though her stage time is limited, is Luisa, played by Carla Lewis. It is Luisa’s task to be the wise one among the many smart ones. She is the comforting mother image Emily has never known; she is the professional trainer and supervisor Emily must learn to tolerate; she is the best friend possible when Medium Molly almost destroys Emily’s growing faith in the human race. She is the thread binding Emily, the impactful rosebud, to the high impassive felt hat of the world’s reality. Without Luisa, sensitively interpreted by Lewis, Emily would be almost too hard to accept.

Director Sara Lampert Hoover has done a remarkable job bringing this difficult play to the stage. The many questions never answered here are addressed for a moment and then let go as though they hadn’t existed. Instead, she presents us with an unfinished quilt in which each piece can be viewed and admired as it is attached to the growing larger body of the work. She is helped by costume designer Michelle Rogers and composer Rodney Alan Greenblat, both of whom provide the characters with outer appearance and inner insecurity that the script cannot. The combination here of creative artists, one and all, has given us some amazing theater and a large, gooey table of food for thought. I’d say “dip in” and devour a fascinating new play.