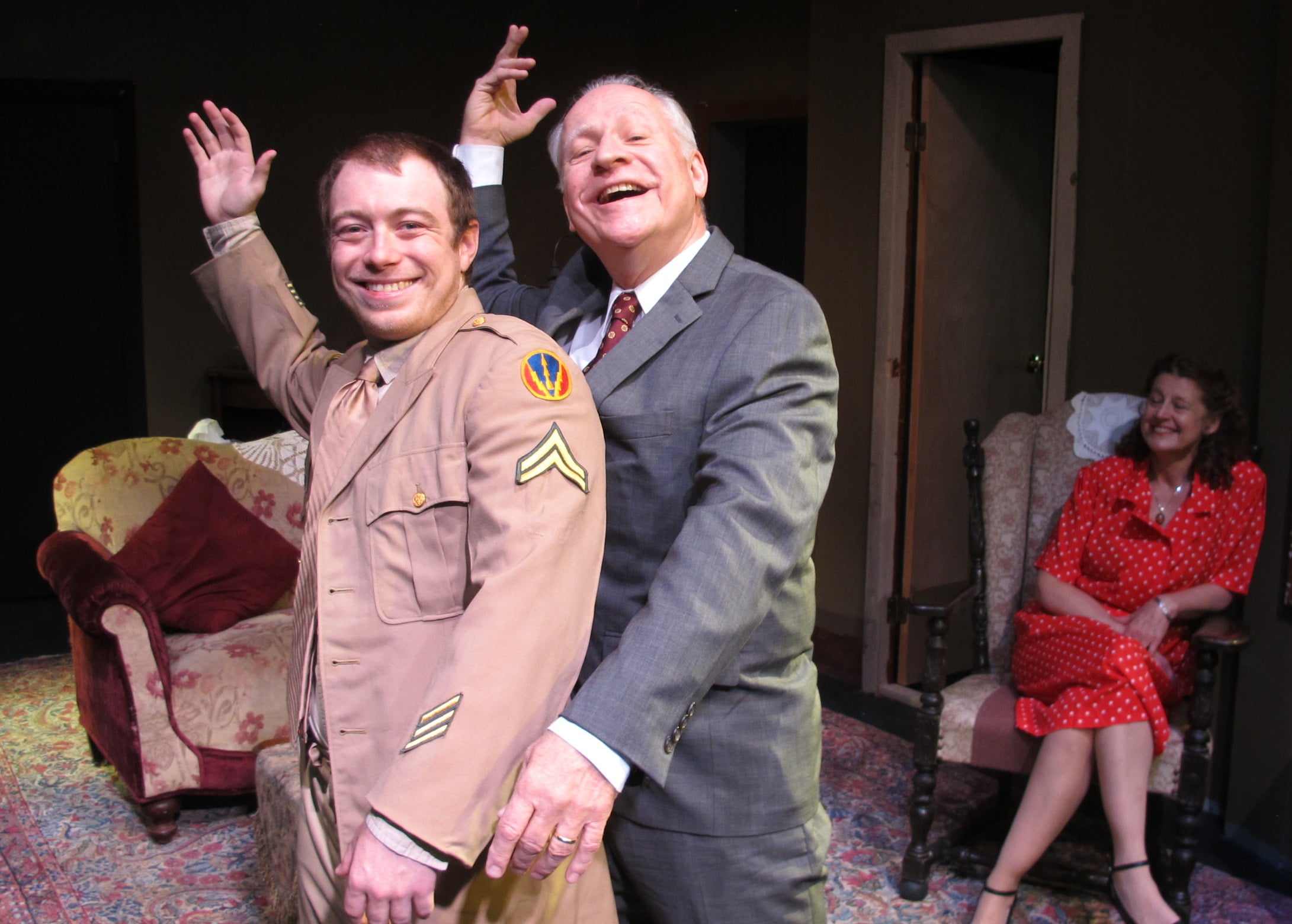 The Subject Was Roses
By Frank D. Gilroy
Directed by Flo Hayle

“Sounds like a night for the Clearys to howl!!”

It’s the third night since Timmy Cleary, released from the Army in the spring of 1946, has been home, and his father has just decided that it should be a great family night on the town. Sounds good, doesn’t it? It’s not. It’s a mistake from which the Cleary family may never recover. On the third night, it shall be told. Things we’ve learned in this play, prior to the second act culmination of events, have been devastating. This 1962 family “comedy,” which won awards all over the place for itself and for its 1964 Broadway stint, broke the mold for light entertainment on the stage when it mixed hijinks and high crimes, both aimed at happy family time, into one honesty-bared recovery route. For, you see, the Cleary clan has been broken for more than 20 years; they’ve just not noticed it for themselves for a long, long while. Timmy, born to cement the emotional and moral sediment of a marriage, may — as a result of his honorable discharge — provide the fuel for the fire of long-withheld rage and disappointment.

There are three couples in this three-person play: father and son; son and mother; and mother and father. Each couple is unique. Each couple cannot be with another couple. Gilroy moves us among them, letting us witness the changing relationships each couple maneuvers through in the course of the fewer than two hours the whole play takes. Set in a middle-class apartment in the Bronx, New York’s Irish settlement, the author manages to bring out the social and the religious background of this family. He also deals with the difficulty that living in such an area can bring to the fore. John can be humiliated by a son who won’t go to church. Nettie can be entranced by the simple act of dancing. Timmy can blow off old family ties with a single gesture. These are deliberate people making snap decisions to suit their own purposes, and what this leads to is simply fascinating to watch in this fly-on-the-wall play that hasn’t aged a bit in the 54 years since it first was seen in New York with Irene Dailey, Jack Albertson and a very young Martin Sheen.

For this very fine production at Bridge Street Theatre in Catskill, New York, three professionals have been guided by excellent director Flo Hayle into these roles. The combination of directorial savvy and acting talent has given us a great opportunity to be those unseen witnesses to how these three people in their three relationships take on the situations that reinforce who they are and who they were, and simultaneously upset their visions of the future.

Lora Lee Ecobelli plays Nettie with honesty and simplicity, and has some of the most devastating moments on this stage. She lives through a near-rape moment and the equally difficult moments of motherly generosity shoved aside. She is danced around her living room with complete simplicity and plays through the public delight of the same well offstage. Her every word celebrates love and misery, and her face and body reflect her internalized reactions to what she experiences and witnesses. This is a beautifully balanced performance that shakes the walls of this theater.

At the other end of the interpretive spectrum, Ron Komora as her husband plays the worst side of a human being whose selfishness threatens to bring the walls down on all three of them at any moment. He himself — John Cleary, that is — has lived a life that has never satisfied him. A coffee merchant (like the author’s own father) who lost his best chance for major success when his wife refused to live with him in Brazil, he has been a suffered man, a man rejected but tolerated by his “foreign” wife (she is not Irish). He crashes through life, taking a prostitute now and then, demanding meals on time and attention to his decisions in life. Komora’s blustery, decisive and ill-mannered John Cleary paints an honest picture of how a man like this can live, love and tolerate the results of his actions. It’s a very strong performance, unrolling the cues to a selfish disposition one layer at a time, never rushing but simply revealing the contents of a narrow-visioned man.

As their son whose three years in the Army have given him both judgment and insight, Caleb John Cushing balances humor, honesty and antagonism with the deft handiwork of a terrific actor. This is a charming fellow, this actor, who understands how manipulation works, and he employs the art while painting us a still-point portrait of a young man emerging from youth who was never expected to grow up. Cushing is an actor I hope to see much more of in the years to come.

Having seen the original on Broadway and cherishing much of what I could recall, I was hoping for a passing good show here, but Hayle and her actors have given me so much more than that. Sets and lights by John Sowle — showing us a dark apartment life in a worn, post-war state — are perfect. Michelle Rogers’ costumes help us see how shabby is not always unpleasant. The sound surround, both live radio and atmospheric period songs, has been provided by Carmen Borgia in just the right tones. All in all, the company has pulled together a most ideal playing situation that serves the author’s work and the director’s vision. Kudos to all here for letting us see a fine work masterfully presented. Highly recommended!

The Subject Was Roses plays at Bridge Street Theatre, 44 West Bridge St., Catskill, New York, through Sunday, Oct. 27. For information and tickets, see the Berkshire Edge calendar, call the box office at (518) 943-3818 or go to bridgest.org.