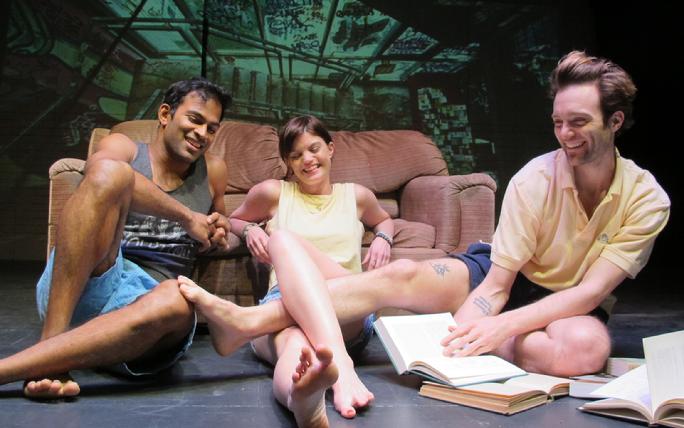 Shivantha Singer as Rajiv, Sara Parcesepe as Rachel and Christopher Joel Onken as Henry in the Bridge Street Theatre production of 'The Letters.' Photo: John Sowle

The Letters
By David Zellnik
Directed and designed by John Sowle

“What is irreplaceable anymore?”

Two friends, former college roommates, are reunited in Berlin at age 22, joined by a girl who makes a world of difference in both their lives. One of the men, Henry, is gay; the other one, Rajiv, is ambivalently bisexual. The girl, Rachel, likes them both. That is not the plot, that’s just the setup of the fascinating world premiere presentation of this new play by David Zellnik, an author with seven Drama Desk Award nominations, among other honors.

The play covers 20 years in this triple friendship and takes us on a bumpy ride through almost every alteration friendships can endure before beginning to crumble away to dust. Henry is the most fragile of the group, emotionally edgy and trusting. Rachel is the most crusty, always threatening and maneuvering the two men at her will. Rajiv is principally self-centered, his good looks assuring him the power to change how the other two feel about him and about themselves. Playwright David Zellnik has left little to our imaginations as we watch these three play emotional games, manipulating the moments and setting up their futures together and apart.

The author has been clever and straightforward at the same time, setting up and telling their stories. What he has not done is create a character an audience can admire, envy or easily tolerate. For me, any play that doesn’t give me a character to root for is a play that keeps me outside—and I want my theatrical experiences to woo me, bring me inside a conflict and make me care. I should care about Henry in this play, but there is too much self pity in him to attract my real attention. I could like Rachel except that she brings out my anger rather than my empathy. Rajiv is too attractive to do more than make me wish I knew him and could put him in his place. Ultimately, it would seem, I have no sympathy, or even finite interest, for any of them.

Not that the play isn’t interesting; it is. Not that the actors don’t do a remarkable job bringing this awkward mismatching to the forefront; they do. Not that the director hasn’t made their disassociated lives interesting and dynamic on the Bridge Street Theatre stage; he has. It’s just that I don’t like these characters; the problem is undoubtedly mine.

The play moves back and forth through time, occasionally showing us something we’ve heard about from one or another character. In some cases, seeing is finally believing. That happens through the honesty and reality of the actors here. Christopher Joel Onken is wonderful as Henry. His character’s fragility and emotional openness is seen in Onken’s physical portrayal of him and heard in his voice. There isn’t one misstep in his portrait of the insecure homosexual who only wants one thing in his life: the honest and loving friendship of Rajiv. His close moments to his reality are less rewarding than the young man deserves, and each little betrayal of their seemingly deep friendship is a setback for Henry, a setback played to perfection by Onken.

Rachel is realized by Sara Parcesepe, who gives the girl so much energy that even when she is sitting down, the force of her physicality comes across the stage and into the audience with amazing strength. She is a dynamic actress, well-suited to a role like this one. She varies very little from the fulsome concept of Rachel. She doesn’t grow and mature; she grows a bit older and keeps all of the qualities that make her compelling and revolting simultaneously.

Her counterpart—Rajiv’s work “wife,” Laura—is played by Alexis Cofield, who takes the “bit” of consternation in her teeth and pulls the play along to a different dimension. As unlikeable as the other three characters, as played by Cofield, she is at least the most obviously honest person in the play. Cofield’s final scene is one of Zellnik’s best, and she does what no one else has an opportunity to do—be completely honest for a moment. Had the play been about her, there would have been someone to root for from top to bottom.

Shivantha Singer plays Rajiv, a hard part to pull off, but that is something that the actor manages to do. Singer takes a dying soul and gives it sensational life force. Rajiv is a man for whom comeuppance has no resonance. His greed, his need for personal adulation, is what drives him, and it almost drives the rest of us crazy as he hurts everyone around him and leaves himself uncaring though alone. Singer is wonderful in the part, playing almost too convincingly. I really cannot be certain he is acting, there is such a naturalness in his playing, but I hope that the actor is holding the reins here and not the man inside the actor. His work is that good.

John Sowle’s sets work magically, his use of projections devastating and marvelously worked. His staging of the play is, as always at Bridge Street Theatre, exactly right for the play and for the actors in it. In fact, the entire production comes off as smart and unobtrusive, a sort of “all things right in this world.”

The opportunity to watch a brand new work is always appealing; so much in this production is exactly that. I just wish I could have found a character to root for. Rajiv, the self-proclaimed prize, is really not a prize for anyone but himself and the other two principals in the play are just not worthy of much better than Rajiv, which is a pity because they have qualities that could explode into a nurtured sympathy if they weren’t so annoying in their own ways. I liked so much of this play that not being able to get all the way with it actually hurts. Still, you won’t see a better realization of this new work anywhere else and perhaps that’s enough.

The Letters plays through Sunday, May 5, at the Bridge Street Theatre, 44 West Bridge St., Catskill, New York. For information and tickets, see the Berkshire Edge calendar, go to BridgeStreetTheatre.org or call (518) 943-3818.