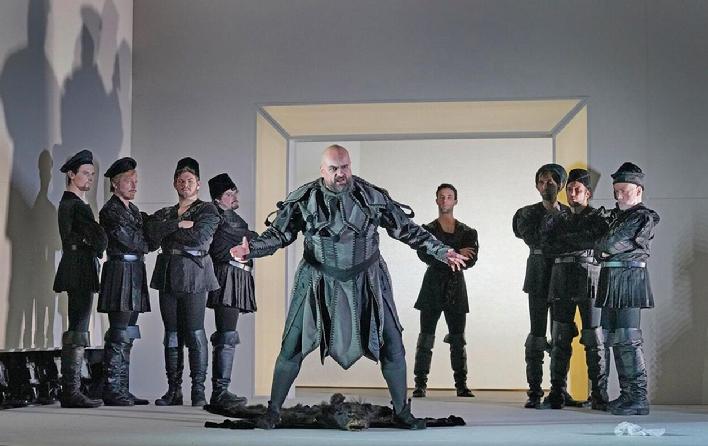 Questa o quella: This girl or that girl are equal …”

So sings the Duke of Mantua early in Act One of Verdi’s “grand” opera, “Rigoletto,” which premiered in Venice, Italy, in 1851. He has no regard for women, who only serve one purpose and that is his pleasure. And yet, even in this modern age, the Duke is not the villain of this opera. This was Verdi’s 17th opera (out of 37) and served as a turning point in his work, the fusion of music and drama being so complete and perfect that the two elements could not be separated. It was also laden with hit tunes that endeared him to the opera-going public — and that included everyone, for opera was the principle source of musical amusement in Verdi’s time.

This work was followed, two years later, by two of his greatest hits: “Il Trovatore” and “La Traviata.” The world of music drama would never be the same. But as to the villain of the piece, it certainly couldn’t be the title character, the court jester — hunchbacked, mean-spirited and verbally vicious — for he had to suffer more than anyone, had to be the ultimate victim of both a curse and the mistreatment of courtiers and even of the Duke. Hating Rigoletto’s influence at court, the men of Mantua’s upper class decide to kidnap the jester’s mistress, Gilda, and offer her to the Duke as his next sexual conquest. What they don’t know is that the girl is actually Rigoletto’s daughter and that the Duke has fallen in love with her, sincerely in love, for the first time. The rest of the story is certainly the essence of tragedy as these lives, among others, fall victim to the circumstances of the age.

Grand opera originated as a concept in France and was later applied to Italian opera. Basically it means a work characterized by large-scale casts and orchestras, and lavish and spectacular design and stage effects, normally with plots based on or around dramatic historic events. For Berkshire Opera Festival’s current production, that grandeur has gone away and we are given the depth of emotion and the breadth of dramatic reality in a stripped-down production without the glamor usually associated with such works. Most of the cast is dressed in black or white or tones of grey in Charles Caine’s otherwise lovely costumes on a bare-wall set designed by Stephan Dobay with two openings: one square and one oblong. For most of the length of the opera, the lighting designed by John Froelich is dim and simple with color used to emphasize the emotional and physical loss of innocence. Audience focus is held tight to the principals singing the main roles, for there is little to distract attention other than a strange hanging fixture that has anchored itself in the stage-left wall and has no function at all. The only grandeur reminiscent of major productions of this work is seen in two robes and in the basic decoration of the theater itself, the Colonial in Pittsfield, which has been restored to its early 20th-century glory.

Jonathan Tetelman plays the Duke of Mantua. His is tall, slender and handsome, with a lyric tenor voice that is simply splendid. Even in black he cuts a major romantic figure and, when he dons his silver robe that he flourishes and finesses with a familiar grace, he is spectacular. His opening aria, mentioned above, is almost endearing in its simple-minded voicing of an opinion bound to get him into trouble. Its sentiments are repeated later the opera in the very familiar and popular aria “La donna e mobile,” which means “all women are fickle,” a concept denied by the plot and actually the reverse of his own basic characteristic.

In his duet in Act One, Scene Two with Gilda, whose home he has invaded in order to meet her, Tetelman is the ultimate romantic singer, putting many of his predecessors, including Luciano Pavarotti, to shame. As Gilda, Maria Valdes is the epitome of romance. Her lush, though occasionally hollow, soprano voice is akin to gold threads weaving into a tapestry. As her passions were aroused throughout the work, her voice became more stable and strong and, in the final act quartet and trio, she held her own beautifully. The young singer is beautiful, slender and certain in her movements as well as in her singing. She has the ineffable qualities that make a star specific and available.

It is a pity that she wasn’t surrounded by stronger support. Mary Ellen Verdi’s mezzo-soprano was not solid enough for her role as Giovanna, Gilda’s caretaker. Erin Nafziger, playing the Duke’s page, could almost not be heard in her short role. Joseph Barron, who sang an excellent Sparafucile, the assassin for hire, was not particularly in character; and Steve Hassmer as the court usher seemed less than certain in his few lines.

Director Jonathan Loy has done a fine job with this piece, giving us the drama and the romance without the major forces of a large “court” to surround or frame these elements. It is due to his vision that the piece, pared down to its needs, delivers the world of Mantua so very well.

Grand performances are in view in this production, however. Maya Lahyani sings a most sultry Maddalena, the prostitute sister of Sparafucile who seduces the Duke in the final act. She has a warm, lush voice and a beautiful, statuesque figure and is really wonderful in this role. Both Joshua Sanders as Borsa and Nicholas Martorano as Marullo deliver well in their roles as plotters in the abduction of Gilda.

Dancers Vincent Brewer and Ana Luiza Luizi make the utmost of their time in the limelight in Act One and dance their diversions with extraordinary grace and a sensual, interpretive style.

Tyler Putnam as the Count of Ceprano and Kalia Kellogg as the Countess deliver nicely in their roles, as well.

But the finest performance in the production among the secondary roles came from John Cheek as the Count of Monterone, avenging his daughter’s ruination by the Duke, placing his curse and later being taken off to prison. One of Berkshire County’s treasures, Cheek spent many years on stage at the Metropolitan Opera and has lost none of his dramatic force and certainly nothing of his vocal power, as he proves in this role.

But the success of “Rigoletto” success rests on the shoulders of the bass-baritone singing the title role. Sebastian Catana certainly fulfills the requirements with the grandeur of voice and acting that is required. His performance here was spectacular to say the least. From his first entrance in a jester’s costume that was the opposite of funny — all black and gray with no color, no sense of amusement, but only that of elegant darkness — he portrays a man living with internal conflict. It was easy to see how little he thought of the court in which he was employed. It was equally easy to see how over-devoted a father he was in his scene with his daughter in their home and later in his scene with her after her defilement. Throughout the emotional tussles, Catana kept his voice in control and used its range to make clear how he felt at all times. This is a very emotional performance and that is as it should be. Rigoletto cannot be sung, it must be acted — and that Catana does.

His final moments in the last scene, with his daughter in his arms and his ultimate acknowledgement of the power of Monterone’s curse, he was both moving and ultimately beautiful physically, vocally and emotionally, in every way that a singing actor can be transformed. As good as the dancers, the tenor and the soprano are in this production, it is the bass who carries the production to its “grand” heights.

Artistic director Brian Garman conducts his large orchestra with perfect control. The 32 players in the Colonial’s pit deliver a beautiful, rich, lushly tonal score with accuracy and ease under Garman’s baton. If there were no other elements to applaud — and those abound on stage — the orchestra heard in this theater would be almost enough to warrant the price of a ticket.

There are two more performances of this opera at the Colonial: Tuesday, Aug. 28, and Friday, Aug. 31. They are not to be missed!

Rigoletto plays at the Colonial Theatre in Pittsfield, Massachusetts, through Friday, Aug. 31. For information and tickets, see the Berkshire Edge calendar, go to BerkshireOperaFestival.org or call the box office at (413) 997-4444.