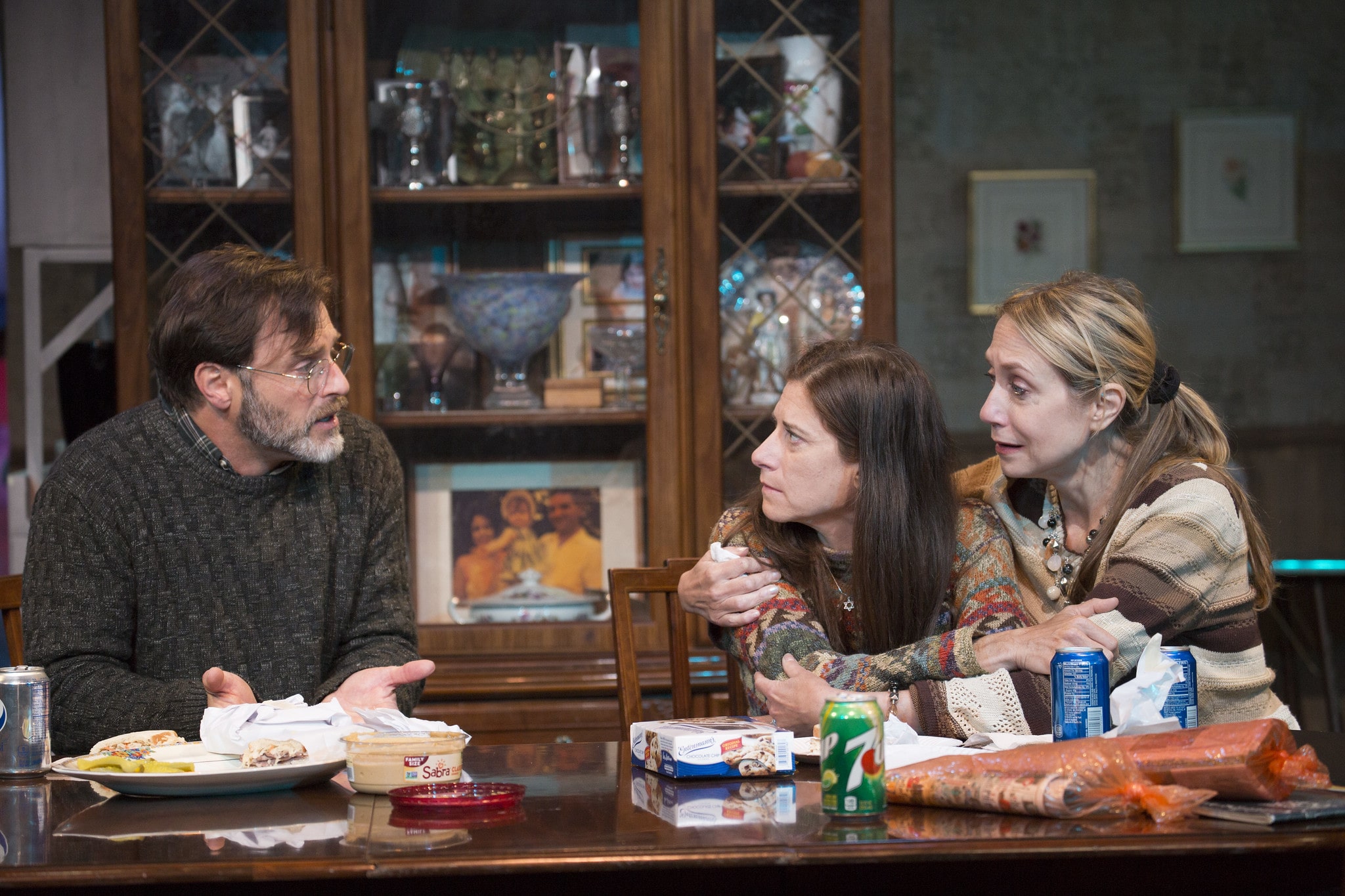 J. Anthony Crane as Michael, Lena Kaminsky as Sharon and Laura Jordan as Holly in the Barrington Stage Company production of 'If I Forget.' Photo: Scott Barrow

If I Forget
By Steven Levenson
Directed by Jennifer Chambers

When a playwright can bring characters to life by creating their voices with his words, I am a happy man. Part of the artistry of Steven Levenson in his play “If I Forget,” being given a superb production by Barrington Stage Company, is doing just that. Through words, rhythms and intonation, he has created seven unique characters that are individual and not the collective voice of the author, who made them all clearly related and yet kept them unique. Take seven actors who can add their own sense of the person each is playing and a theatrical gem is offered to an audience that doesn’t even know this talent has been used.

Three siblings gather in an old home in Tenleytown in political Washington, D.C., to aid their ailing father a year after their mother died. They are an awkward family, each having developed lives that rarely intersect. While the city doesn’t often have an effect on their existence, the struggle for some sort of Israel/Palestine understanding has hit them hard. Michael Fischer has completed a book about Jewish history and the Holocaust, and its existence has collided with his father’s knowledge of Jewish lore and Jewish history. His sister Sharon is even more upset with Michael about his viewpoint for her own personal reasons. Michael’s non-Jewish wife has her mixed feelings about the book and his older sister, Holly, has conflicts with all of them expressed through her second marriage and her odd relationship with the entire family unit. Michael’s emotionally unsettled daughter, Abby, is traveling in Israel, which worries him greatly. There’s trouble, my friends—trouble with a capital “T” or “J.”

The visiting-from-out-of-town couple, Michael and Ellen, are played by J. Anthony Crane and Kathleen Wise. Ellen’s deep concern with Michael is beautifully played by Wise, and her deep distress about her daughter masked as overconfidence in Abby’s capabilities is touching through every phone call she receives. This is a warm, effective performance and her reaction to her husband’s insensitivity is a moment that resonates heavily.

Michael, the central character in the play, is played as brusque, affectionate, oversensitive and insensitive by J. Anthony Crane. His character often strikes mesmeric chords that resonate long beyond Michael’s words. There is hardly ever a moment in this play not fueled by Michael, even in absentia, and Crane has the acting chops to justify that in the play. Also, Crane brings his good looks and his strong voice into the picture, creating a living, breathing human being who is sowing the seeds of his own destruction. Michael is not just writing about Jewish history and destruction, he is Jewish historical self-destruction.

Michael’s two sisters are as different as possible, but when they unite, they are as similar as two peas in a pod, each still unique in size and shape but tasting the same: reluctantly identical. Holly, played by Laura Jordan, is strong, definitive, overbearing, and wears the blinders needed to remain self-focused even when she’s electioneering for her father and his historical presence. Jordan makes Holly strangely objectionable at her best times and keeps her sweetly endearing when she embraces either of her siblings, giving them the devotion and support they really need.

As her husband, Howard, Mitch Greenberg delivers nicely through every moment he plays, making his personal confession to Michael about his financial state and its causes into a splendid personal moment. He has a calming voice and brings to Howard a calming personality, yet he is the impetus for a remarkable outburst and a change in the direction the play takes at its most important and difficult time.

The younger sister, Sharon, the self-sacrificing one in the trio of adult kids, is played by Lena Kaminsky. Sharon has lived her life for her parents’ sakes, something she holds on to for her identity yet resents in many ways. Kaminsky gives this role an “oomph” whenever she exposes the sacrifices and yet she is equally regretful when she makes a mistake in Holly’s eyes, a judgment she hates to admit. Sharon is just as resentful of Michael’s achievement and not supportive at all when he falls into a troubled condition as a result of his honest hard work. Sharon is a taskmaster who cannot resist speaking up when her brother and sister take matters into their own hands. It’s a grand performance.

As their father, Lou, Robert Zukerman gives a beautiful and controlled performance: In Act Two, Lou has suffered a stroke. Any time he speaks, there is importance imparted naturally, which is really terrific—another excellent performance by this actor.

Michael’s nephew, Joey, is played by Isaac Josephthal. Joey is a high-school student, problematic in his own right, but his affection for his mentally ill cousin Abby pushes him into the action more than once. When he finally grabs time with Michael to inquire about her condition, the play takes an odd turn, moving out of the wonderfully written play with distinct characters and into a form of Greek tragedy with a chorus to underline the principal actor’s relating of the final truths to the next generation, the harbinger of history yet to happen. Josephthal is very good in this role, and his final scene with Joey’s uncle is just right, keeping the play grounded in reality while the author stretches credibility a bit as the sisters, wife and father of Michael echo and expand Michael’s straightforward and emotionally difficult monologue trying to play through. It is a shocking moment, both to hear about Abby’s psychotic insights and to alter the form of the play. I would much rather have heard it all from Michael, whose fate is unknown and who had moved me to tears just before this alteration.

The play is wonderfully directed by Jennifer Chambers, who manages the transitions among the six locations in the house without pause and with a very stylish grace. She has maintained the awkward relationships among the characters with precision and altered them physically when the writing keeps them too constant. That amazing set was designed by John McDermott, who even furnished it with the right sort of pieces to provide a reality for this very real piece. Elivia Bovenzi’s costumes made each character perfectly unique; there wasn’t one outfit any of the others would wear. Scott Pinkney’s lighting design subtly kept us in real time and real mood.

While not a perfect play, it is so good that it should not be missed. When history and religious background lead the intellectual way to drama and all the factors work perfectly—as they do in this fine play—all we have to do is sit back and let the characters take us where they must. I haven’t seen a finer example of that this season anywhere, but now I have right here in Pittsfield. You owe it to yourself to make this the drama of the season in your own collection of theatrical experience in 2019.

If I Forget plays on the St. Germain Stage at Barrington Stage Company’s Sydelle and Lee Blatt Performing Arts Center, 36 Linden St., Pittsfield, Massachusetts, through Sunday, Sept. 8. For information and tickets, see the Berkshire Edge calendar, call the box office at (413) 236-8888 or go to barringtonstageco.org.