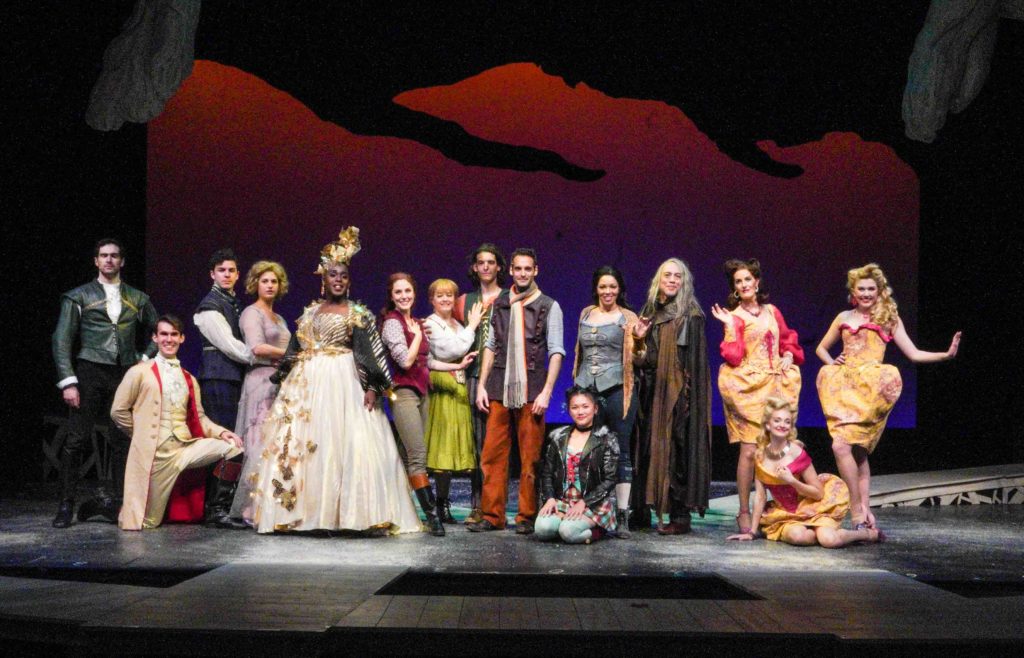 “Foolishness can happen in the woods.”

For Barrington Stage Company’s first mainstage production in its 25th season, artistic director Julianne Boyd has chosen Stephen Sondheim’s massive retelling of classic fairy tales “Into the Woods.” In this version of these children’s classics, a baker and his wife, yearning for a child they have not been able to have, agree to assist a witch in undoing a spell she cast on his family that has had a terrible blowback effect on her: She has aged into a hideous crone. Along the way in their quest for four items she requires, the couple encounter Little Red Riding Hood, Cinderella, Rapunzel, Jack the Giant Killer and a host of peripheral characters, all of whose stories become intertwined in a single narrative about the mistakes human beings can make that have unanticipated consequences. It’s the important concept of “happily ever after” that takes these timeworn tales into unusual and manic directions in author James Lapine’s version, and it is director Joe Calarco’s vision that takes this show the same ways. 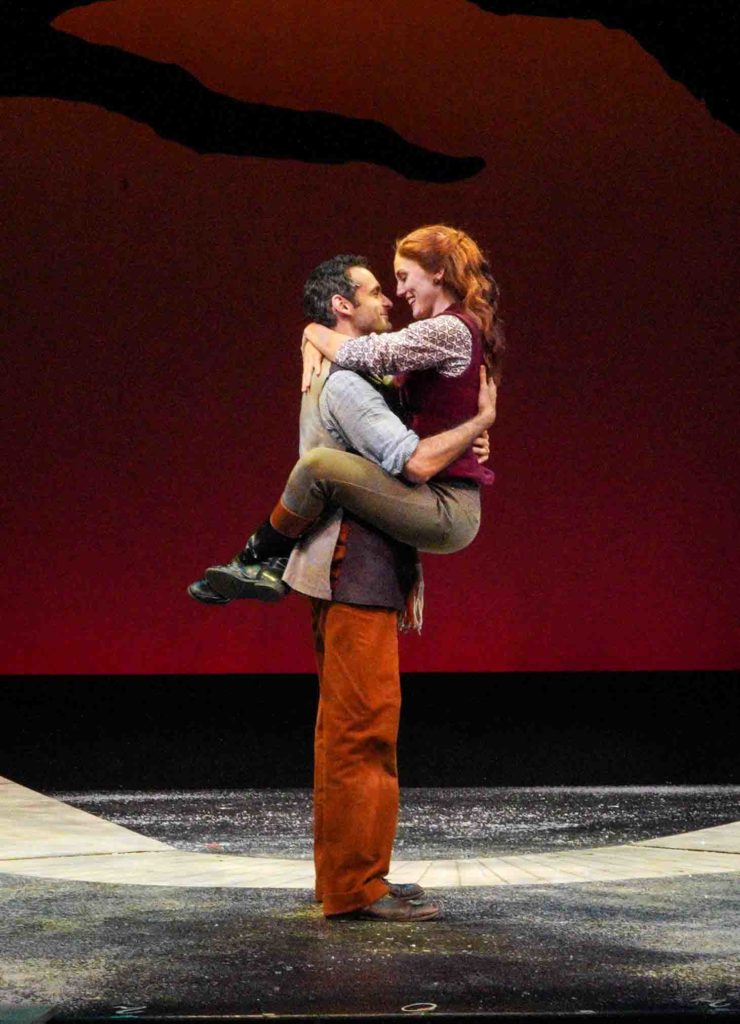 Jonathan Raviv as the Baker and Mara Davi as the Baker’s Wife in the Barrington Stage Company production of ‘Into the Woods.’ Photo: Stephen Sorokoff

The show’s plot hovers around the baker and his wife and the witch. It is their story that drives the action and it is their tragedies that inform the basics of everything that happens. To make this work takes exceptional people: Chip Zien, Joanna Gleason and Bernadette Peters in the original company; Jonathan Raviv, Mara Davi and Mykal Kilgore on the stage in Pittsfield. The new trio is easily the equal of the originals. Bravi!

Surrounding them is a fascinating group of performers, mostly new to me, who deliver the variety and depth of the well-known children’s tales’ principals. Amanda Robles is a strong and sturdy Cinderella who only crumbles a bit when her mother’s grave is destroyed. Clay Singer is an overgrown, immature Jack whose beanstalk adventure wreaks eventual havoc on the ensemble. Dorcas Leung presents the essence of the bad-seed child in her interpretation of Little Red Riding Hood. Anna Tobin is the ungrateful child Rapunzel, a teenager who never gets over her anger at her situation. And, of course, there are the inevitable princes: Rapunzel’s swain, played to a tee by Pepe Nufrio; and Cinderella’s Charming, who is played by Kevin Toniazzo-Naughton. He has my favorite line in the show, late in the second act: “I was raised to be charming, not sincere.” This one line sums up the attitude of the show’s creators brilliantly. “Into the Woods” is their way of reversing that philosophy.

Bear in mind that this is NOT a children’s show, not one of those family ventures where kids are first exposed to fairy tales. This is a very adult edition of centuries old, European-based legends about life and death, love and hatred, human monsters of all sizes. Director Joe Calarco has seasoned those concepts with beautiful people, a glorious production and a focus on how everybody influences everybody else. Walt Disney this isn’t (with the possible exception of “Bambi”) and Little Golden Books it’s not. This show’s eroticism is as potent as a poisoned apple; its heroism is reflected in our current situation with Iran and North Korea.

There are no performers in this show who aren’t giving their best, and that “best” is truly approaching perfection all the way around. Leslie Becker is wonderful as Jack’s mother and other vital characters. Sarah Dacey Charles is truly frightening as Cinderella’s stepmother and, as her own horrible children, Megan Orticelli and Zoë Aarts deliver in the hateful department beautifully. Equally hateful is the prince’s steward, played with abandon by James Cella. Thom Sesma is a standout in a crowd of standouts as the Narrator and the Mysterious Man.

Barrington Stage Company’s production, led by Calarco, is as fabulous as the story of the show with an extraordinarily beautiful and functional set designed by Brian Prather, who exceeds his earlier work here and elsewhere delivering the fantastic realism the show requires. Jen Caprio’s costumes are equally remarkable. For the most part, each character has one costume that defines who they are with absolute structure, but for the witch, she has gone to absolute extremes that almost make this a Parisian excursion into fantasy fashion week. Her Cinderella costumes are stunning also. Sherrice Mojgani’s lighting design is truly integral with the play’s story and moods—so nicely done. The hair and make-up design work is integral in this show and beautifully delivered by J. Jared Janas. Matt Kraus delivers with his sound design, without which the second act would be total fantasy, but he brings reality to it, and Brandon Hardy’s puppet design is delightful.

For many people this show is a difficult one, shattering their memories of childhood, but for me, it has always held a unique place of admiration. This production is the finest I’ve seen and a memorable experience from top to bottom. If it hasn’t already sold out, get your tickets fast.

Into the Woods plays at Barrington Stage Company’s Boyd-Quinson Mainstage, 30 Union St., Pittsfield, Massachusetts, through Saturday, July 13. For information and tickets, see the Berkshire Edge calendar, call the box office at (413) 236-8888 or go to barringtonstageco.org.