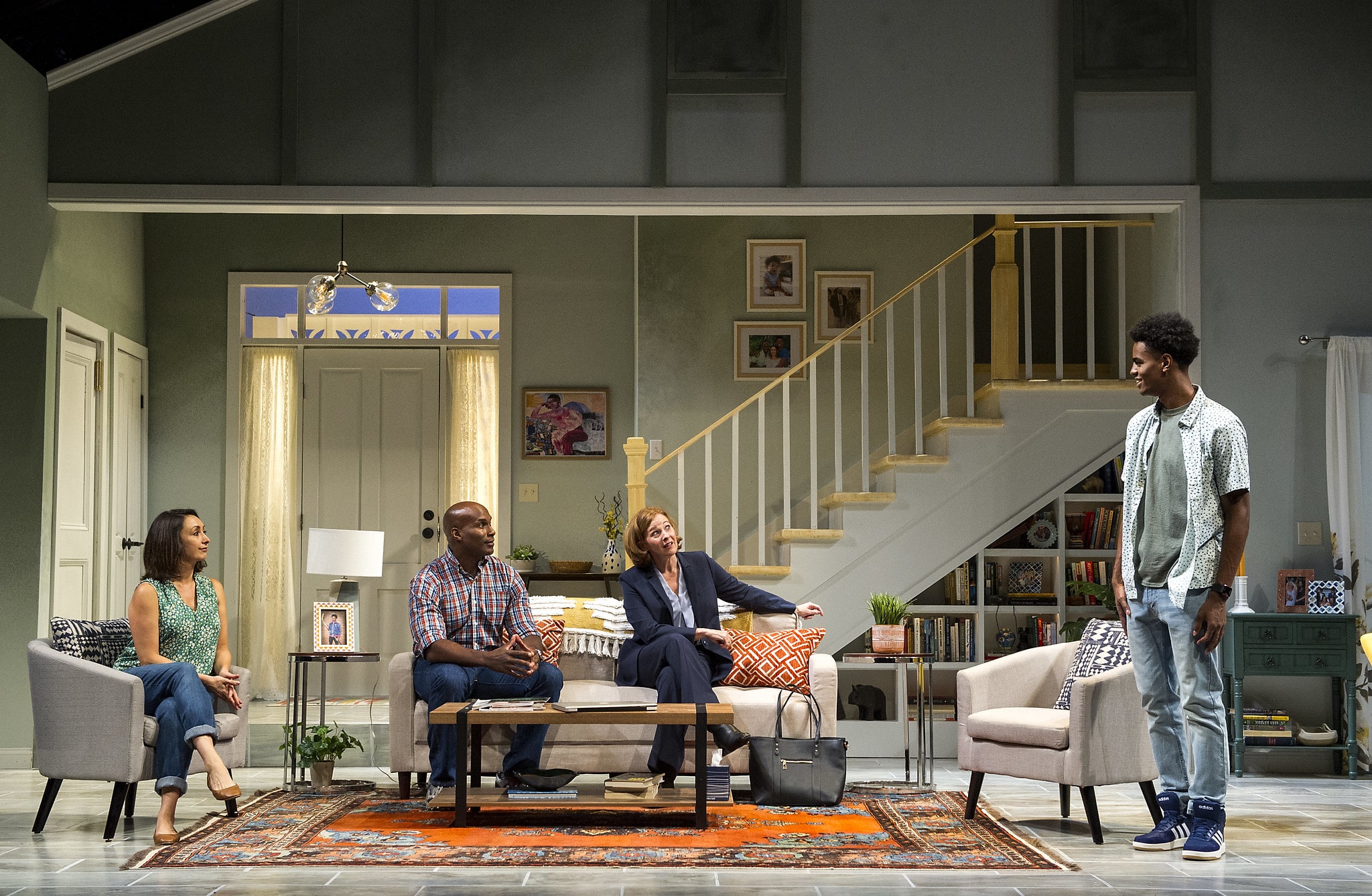 Two questions, reader: Do you vote? Are you keeping up with the news daily? If you answered “yes” to either question, then get off your seat and get to one at Barrington Stage Company’s Boyd-Quinson Mainstage in Pittsfield as quickly as you can. There is a play going on that will give you a pretty good picture of what the year 2021 could look like. It’s a handsome stage picture with attractive people in it, but it is anything but a pretty picture. This is a new play having a world premiere production and it is almost too late. With any luck (on my knees here, praying) PBS will come and film it with its current brilliant cast, and show it every day between now and the 2020 election. It is that powerful, that important, that necessary: yes, a necessary play about how our country’s future looks to a Persian-American playwright living in Portland, Maine. If our country’s future looks like it does in his play, then even in New England, we are doing something wrong.

A South Florida couple has just welcomed their son, Jeff, home from college. At a local mall, he has witnessed human atrocities that have made him both sick and angry. He is cautioned to keep to himself his reactions, for the political climate is touchy: Muslims are being persecuted in all the worst ways possible. This family is not Muslim and they try to maintain an apolitical attitude in all things. They don’t realize that the government has them under surveillance and, when they understand that, the fear that overwhelms them brings more drama than they have ever experienced into their lives. That’s a basic outline of the plot. It is the play’s reality that makes this simple set of human dealings into a tragedy of monumental proportions.

This is the kind of play that director Julianne Boyd can whip both into shape and into the faces of her audience. Over the years she has brought these sorts of issues into focus and in this play, she is at her zenith. Not to diminish the talents of her cast, but this is her show and if her usual audience is able to move over two seats, it is the show that will bring new audiences into her grasp.

It would seem that visitor Sherri, played by Rasha Zamamiri, has brought disorder into the family, but in truth, her visit is only a catalyst to the inevitable action by authorities. She may be an excuse for Anna to use, to point a finger at, but the government agent who also visits is not interested in her, as she ought to be, but in the family unit and its allegiances. Zamamiri is a wonderful actress, maintaining calm in the light of day, distress at night, needing the help of others to stay alive. She is a traveler through the new American Underground, seeking asylum and refuge. Her scenes, like her three-part monologue, are softly and sincerely played, and her plight becomes ours through simple association as an audience. She pulls us in to places we didn’t realize existed. It’s a superb performance.

The normal American family starts with two sane, ordinary people, Rog and Anna. She is a librarian who runs a book club that meets on an irregular basis. He is a scientist and teacher who worships history as a subject. He drinks beer; she keeps a clean and orderly house. They have one son who is in college studying history, his father’s favorite subject. I know people like this; so do you. Anna is passionate about things; Rog is calmer. That they maintain a secret life is somehow not too surprising.

Rog is played by Alan H. Green. If Rog was any more ordinary we’d say “Hello, neighbor, what’s new?” and never expect much of an answer. Green plays this side of the man very well. As more information emerges about him, however, the complexity of this character almost startles us. Green is delightful letting information drop into place, never complicating things with obvious passion. Instead he allows us to get to know the real him, just as his son does, one surprise after another almost leaked like government secrets in this Trumpian age. I can’t imagine a more interesting way to meet this man than in the manner in which Green plays him. Whether he or Boyd decided on the subtlety approach, it is the right way to find the full-out Rog.

Unlike Rog, his wife, Anna, can keep secrets, but with the difficulty of an emotional mother. In the play she starts out worried and frustrated because her son has not come home before the imposed curfew. This is a signal about the woman’s emotions. Still, Natascia Diaz manages to keep her character in check until the situation is so out-of-control that she cannot be another Rog, cannot contain indicated realities. No, she must blurt out what cannot be concealed. Diaz makes this transition with force and gusto. Even so, when things reach a climax — the first one, really — she can play her scene without kicking into the next one. Like the couple they play, they keep the future apart from the present.

Justin Withers plays their son with a strong combination of their abilities manifesting as his own. Even sitting in front of a photo of himself that could become a clue to what may transpire, he is concentrated on the moment and not on the outcome. He introduces the play and ends the play with a Tennessee Williams-like monologue that almost gives away the future of this family but doesn’t. His anguished conversation with the government agent is hard to follow without emotions welling up, which is a very exciting reaction to what is clearly a play — or is it?

Nothing brings a family together more quickly than the blatant government agent. Played by Kathleen McNenny, she is the opposite of subtle even when being subtle, and her effect on the family is devastating. McNenny is perfect as the unsubtle woman charged with an ugly responsibility that she cherishes. Her cool demeanor seems both inflexible and all too comfortable. She is riveting in both action and word. If she ever showed up at my door, I’d know the end was near, and it is because the play is more than two-thirds gone when she walks in on them.

I don’t know when I’ve liked a political polemic more. This play would make up my mind for me on issues that, like most of us, I would choose to ignore or pass over with a shrug. Don’t talk to me about this play until you’ve seen it. The reality it projects is close at hand and I witness its growth every morning on my TV. See it! It will be 90 minutes out of your life that could someday save your life or mine. But don’t do it for me. See it for yourself. And call PBS, call HBO, call Netflix. Everyone needs to see this play.