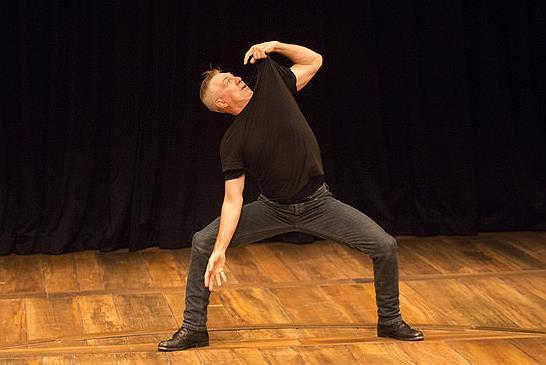 “So foul and fair a night I have not seen.”

With those words, Stephan Wolfert begins to define his play, “Cry ‘Havoc!’,” now on stage at Shakespeare and Company in Lenox, Massachusetts. But this is not merely a combination of speeches from the plays of William Shakespeare, nor is it a take on Macbeth (from which the quote, with “night” substituted for “day,” is taken; Macbeth has won his battle but lost many men, hence “fair and foul”). This is a 75-minute diatribe on the life and experiences of a man named Stephan Wolfert. This is his story – his autobiography in stories, quotes, revelations, agonies and even a bit of ecstasy now and then. It is a life, after all: not a play, not a story, not a tale.

As with any figure of interest, Wolfert’s story begins in childhood and ends near madness. The final and unwanted child of a bitter mother and an alcoholic father, he is an abused child with little hope for release from the agonies of being used by them and by an older brother who stamps a nearly jack-booted foot on young Stephan’s dreams. He dreams of art, of dance and music, of a theater he doesn’t even know exists. His answer to the problems he suffers is to join the military and, in spite of a physical deformity, he manages to worm his way into the government service which sees possibilities in him. He is sent to college and becomes a medic and an infantry officer. He is sent overseas and he serves from 1986 to 1993. 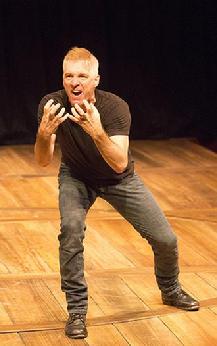 As he explains in the play, the military recruits you then wires you for its purposes, uses you hard for as long as possible, and then dumps you back into the world from which you came with no “decruitment,” no rewiring you for civilian life, and you remain shackled to the horrors you have survived, a remnant of military dis-service. It is in this guise that he discovered the theater and found some release in the words of the Bard of Avon whose plays often dealt with men in this same condition. In the play, Wolfert often calls on the words of Shakespeare to present the next phase of his story, or to express in glorious tones the inglorious world he has occupied. He moves freely and conveniently between these two worlds – the modern-day life he has lived from Wisconsin to California via the Middle East, and the dramatic world of Elizabethan theatre.

Late in the play, he talks about his personal life and his difficult relationships with women, even with his one love, Dawn, who comforts him as best she can. It is here, after the horrors of childhood, military life, war and its personal aftermath, that Wolfert touches us deeply. We want to hold him, comfort him, reassure him, and pledge to be there for him though we know we cannot do it. This play is about the journey of a man’s real life, a man who is compelled through circumstance to be a loner first, last and always. There may be friends, lovers, and partners who can endure some of the ride alongside the tortured soul of this ex-soldier, but there is no one person who can calm the “berserker” soul that dwells inside him.

“The gates of mercy shall be all shut up:” Wolfert declaims this “Henry V“ quote as he examines his perceived present in the play while trying to make his way into some sort of viable life. The playwright/actor has a remarkable facility for movement, often transferring each aspect of the words he speaks into physical reality. He tells the tale, at one point, of a World War I soldier from Albany, New York, Sgt. Henry Johnson, who served with the only all-black troop alongside the French military (American whites would not have them in the same trench) who was decorated with the highest honors for his service 85 years after his death, receiving the Medal of Honor. He draws the overwhelming parallel of his own service, which was not enough to provide him with a future mental state to continue unsupported by a military that uses and abuses its loyal employees.

Through all of this and more, Wolfert is a dynamic performer, a compelling storyteller, and a consummate actor and mime. His childhood dream of being a dancer is realized in the stylized finale of the play itself. Offered with an intermission followed by a talkback (which I could not stay for), the show is performed in a theater where the houselights never go off, leaving the audience as exposed as the actor, creating a relationship between them that is close and unique.

Directed by Eric Tucker, the play moves swiftly and even the hardest narrative is treated with patience and presented as a collection of gems might be displayed on a glass countertop. The brightness of the room mitigates the sharp edges and the harsh colors as Wolfert creates a world for us that is simply his own, able to be shared briefly.

There is such a directness in all this that it is a marvel. His face, voice, hands, body, and feet are sensitive and every angry blow, every hateful moment of his life, becomes a shared event. Likewise the discovery of a new world through Shakespeare and local theater emerges in this tale like a miracle, unanticipated and joyous. That it clearly isn’t enough to solve all his problems, it is at least a way to bring some understanding that “All the world’s a stage and all the men and women merely players,” a quote you won’t hear but one you leave the theater with in your mind anyway, its simple meaning suddenly made so clear.

Not your usual one-person play, this one touches on too many difficult aspects of our modern life. The same mistakes go on, year after year, and Stephan Wolfert is out to create ways to help. This play is only one of them.

Cry “Havoc!” plays at the Elayne P. Bernstein Theatre on the campus of Shakespeare and Company, 70 Walker Street, Lenox, Mass., through Saturday, August 13. For information and tickets, see the Berkshire Edge calendar, call the box office at (413) 637-3353, or go online to shakespeare.org.