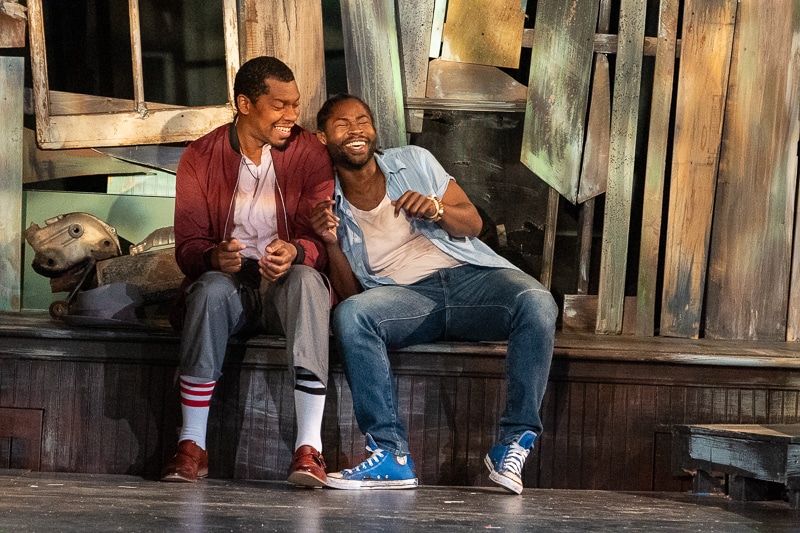 Brian Demar Jones and Jovan 'Kofi' Davis in the Ancram Opera House production of 'The Brothers Size.' Photo: B. Doktor

“That’s all you know, with your feet to the earth.”

This is just simply riveting theater. In one of the tiniest theaters in the Berkshire region, some mighty big experiences can be had at the Ancram Opera House, where they are presenting Tarell Alvin McCreary’s play “The Brothers Size.” This early work by a young playwright is a true work. A dynamic combination of music, folklore and the ironic realities of three Black men’s lives collide in a theatrical environment and a theatrical manner. The play about how an ex-con finds his way in the world where his youth and innocence are tested by circumstances is the second play in a trilogy about his family unit and its effect on his choices and life. Oshoosi Size is willing to move up in the world, but he chooses instead to stay still and let the world move up on him.

In a shack in San Pere, Louisiana, near the bayou, the 94-minute one-act play covers a tension-filled period of time as Oshoosi, played by Jovan “Kofi” Davis, dreams his dreams of life and experiments with a few ways to live it. His favorite dream is just to do nothing but have fun. His short-term incarceration has introduced him to many new ideas and he wants to experiment with most of them; his former cellmate wants to help him do just that, while his older brother, Ogun, wants him to find a better way, a form of honest work, a few real friends, a family life that includes them both, but Oshoosi hasn’t reached that point in his life as yet. The play sets Ogun, played by Geovonday Jones, into a direct conflict with Elegba, played by Brian Demar Jones who is — Devil-like — after the body and soul of Oshoosi.

The two Jones boys battle it out and the outcome is tragic, though the journey for supremacy is filled with dancing, chanting, singing, physical affection and bombastic rhetoric. The play’s language is often startling but is never offensive. There are moments of great fun and moments of outrageous manipulation and guilt. Storytelling ballets are constructed this way, with every movement counting toward understanding.

It is so interesting to note how each appearance of Elegba influences the rhythms of the piece, shifting the emphasis and adjusting the reactions. That effect may be the most important contribution of the director Martine Kei Green-Rogers.

She keeps the men moving most of the time. Even seated, they are always on the move, adjusting their views of one another — fixing the picture, as it were. Elegba, for example, uses his audience positions whenever he can to bring the bigger world into this miniature picture of relationships.

Unlike Oshoosi, who is not yet an established person, Elegba has made his choices and he is a bad man, a bad influence, but such an attractive and seductive one that it would be too easy for him to influence the younger man.

The design elements for this play transform the early 20th-century former grange hall into the shack in Louisiana with amazing agility. Sarah Edkins’ set is remarkably usable for all of the scenes, including one in Ogun’s autobody shop. The lighting by Jesse Portillo isolates these men in a world that is all their own, even though the story takes two of them out of this environment. Caitlin Cisek’s costumes reveal who each man is: Oshoosi’s undershirt is part of his juvenile persona; Ogun’s work clothes define the man’s position in the small world he inhabits; the casual formality of Elegba’s clothing — his mismatched socks and his carefully preserved jacket — are counterpoints that give him large-scale opportunities to seduce his mark. The sound-design work by Sun Hee Kil is exemplary, giving the play’s needs both underscore and emphasis.

Green-Rogers adds a prop toward the end of the play, a suitcase held by Oshoosi, that affords him a different look as that child-man’s undershirt disappears behind the prop. For a moment we can see the man Oshoosi could become and might become. As in many other Mephisto stories, the easy answer appears at the right moment and provides a bit of salvation. This is that moment, beautifully executed by Davis and Jones (Ogun). It is not a definitive ending, but it is a shot at the possible. To quote Stephen Sondheim, “When love comes so strong, there is no right or wrong.” Ogun is doing right by flouting the law, a right/wrong. The question that remains at the end of the play is “What is justifiable when family, salvation, soul are saved by a fatal call?” Does the Devil in us win out through a good deed? The playwright, McCraney, doesn’t give us the answer, just the clues — powerful, riveting theater.

The Brothers Size plays at the Ancram Opera House, 1330 County Route 7 in Ancram, New York, through Sunday, Aug. 25. For information and tickets, see the Berkshire Edge calendar, call (518) 329-0114 or go to ancramoperahouse.org.