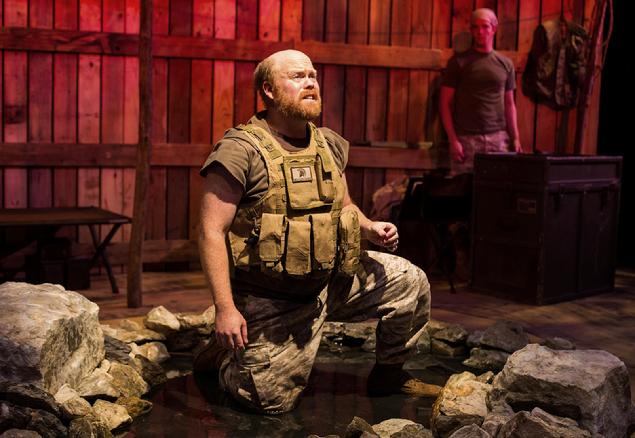 By Lisa Peterson and Denis O’Hare, based on Homer’s poem “The Iliad,” as translated by Robert Fagles

Dressed in military colors, a reporter, a press representative has taken shelter in a wooden hut surrounding a small, stone-bordered spring in the desert somewhere in the Middle East during a war going on today. The reporter, known as Poet — though Scribe would be a better name for him — has been mulling over his situation and he has realized an awful truth: what he is involved in is not something new and important, but rather it is something ancient and ongoing and unavoidable no matter what anyone brings to the prevailing circumstances.

This is how Jonathan Epstein, director of Lisa Peterson and Denis O’Hare’s one-man play, “An Iliad”, sees this show and how he has chosen to present it at Shakespeare and Company in Lenox, Massachusetts. This is the third production I’ve seen of the work since August, 2013 and it is a unique perspective, one which works extremely well.

What Poet tells us right off the bat is that he has known this story, has witnessed it and told it in many places in many ways over the time he has been involved in war reportage. Who is he? He never tells us. Is he the ancient Greek poet, Homer, whose “Iliad” documented the Trojan War so beautifully? He is a modern man obsessed, certainly, with the truths of that early conflict but is he a typewriting, computer-oriented, 21st century newsman or not? Ultimately none of this matters for the story is both specific to the Homeric epic and its time and to the wars we fight now, undeclared and uncertain though they may be.

Steve Hendrickson played the role at the Chester Theatre two summers ago and Jeannine Haas played it at Hubbard Hall this past May. Both actors gave extremely different and moving performances in the role. At Shakespeare and Company Michael F. Toomey has undertaken the 90-minute monologue and his performance is miles apart from the work of his predecessors. A 16-season veteran member of the company he is best known for his more manic, comic roles such as Puck in “A Midsummer’s Night Dream” or Bardolph in “Henry V.”  In this play he gets his laughs but always at the expense of a heartstring being plucked.

Toomey is the only actor in the play but the music of Gregory Boover helps to guide us through the emotional turmoil of the story. On stage and in full sight the musician, with his own compositions, takes us through the action and the moods of the moments related by Poet. This is not a creation for this production for the script calls for such a duo on stage, always with the composer and performer being one and the same. This has helped to underscore the mighty differences in the three productions I’ve seen. Boover’s music is as essential as Homer’s tale to the telling of the history presented here. His work is wonderful, and his use of unusual performance techniques on his electrically amplified acoustic guitar, highlights the changes in the script.

Director Jonathan Epstein has also designed the set which grounds the production in a modern-day setting. It is a most effective combination of natural elements, wood, rock, water with just enough contemporary artifacts, like an army cot and a portable typewriter, to make us feel the realism that he has imposed on the play. The actor, Toomey, uses very few of the available props on stage, their presence keeps us conscious of the here-and-now about this production. It is a very clever device to keep the play and its audience grounded in our own times.

Govane Lohbauer’s costumes are just as strong a statement as the set and its attendant pieces. It is important to note that nowhere on set or in costumes is there a visible weapon. The production does a wonderful job in maintaining the character’s purpose — to tell a story. He is not a warrior, a soldier, a mercenary. He is a witness and his clothing and his place keep us vitally aware of that fact. Excellent theatrical lighting is provided by designer James W. Bilnoski who counterpoints words with light and color. Like the music, the production values underscore the script and the character’s purpose.

Toomey is remarkable. He stumbles over facts that Poet knows and recovers as needed. He uses the spring to refresh himself as he does the contents of a gin bottle. He acknowledges his place and his purpose and when he tells the history of Troy and Greece and their conflict over the abduction of a woman, King Menelaus’s beloved Helen, about the nine years of war and destruction and the eventual twilight-time of an entire culture, he does so with compassion tempered with reason. One favorite moment of mine in this play is the point about an hour and fifteen minutes into the piece where Poet, overcome with the events of the day, relates the history of war on this planet and shows us that the human race has never existed for long without war. Toomey presents this nearly 5-minute litany with less compassion and less sturm-und-drang than I have heard before and in the context of this production it becomes a more chilling rendition, factual and formal and non-aggressive, than any I have heard hitherto.

One person shows are never my favorites, but this one is so well written, so well performed and directed, that seeing three productions in a short time has never proven to be dull. Instead, it becomes more compelling with each edition and Shakespeare and Company’s fine twist on this history is most welcome. Michael F. Toomey is splendid and it’s exciting to see an actor whose character work has been entertaining take on this important a role. For any who see this production, it will be one that will be memorable. It may also shake your confidence a bit in the world we live in.

An Illiad plays in the Elayne P. Bernstein Theatre at Shakespeare and Company, 70 Kemble Street, Lenox, Massachusetts through November 1, 2015. For tickets and information, consult the Berkshire Edge calendar, contact the box office at 413-637-3353 or go to www.shakespeare.org.